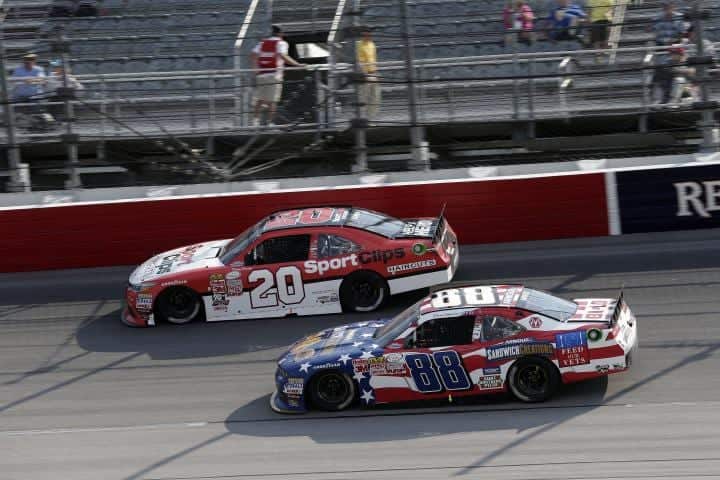 Denny Hamlin absolutely dominated the VFW Sport Clips Help a Hero 200 at Darlington on Saturday, winning the pole, leading 117 laps and posting a perfect driver rating en route to the win. The victory was Hamlin’s third of the season — including two from the pole — and his 14th career win in his 152nd NXS start.

Hamlin’s Sport Clips Toyota was on a rail for most of the race, but pit strategy almost stole the victory away from the No. 20. With green-flag pit stops occurring in the final 20 laps, all of the leaders stopped with the exception of Hamlin’s teammate Daniel Suarez. Suarez led 14 laps, but was passed by Hamlin with three to go, fuel saving and tire falloff proving to be too much for the Mexico native. He would finish third.

Besides Suarez, Hamlin’s team was the only thing stopping him from winning. During pit stops for the second caution of the day, Hamlin’s gasman struggled to get control over the second can of fuel and was unable to dump any of it into the car. Hamlin sped away but had enough fuel to stay in the lead heading into the final set of stops.

Kevin Harvick appeared to be Hamlin’s only serious challenger. The two swapped the lead a few times early on in the race, with Harvick leading 16 circuits, and Harvick was reeling Hamlin in before pit strategy in the final 20 laps undid their momentum. Harvick’s team, sensing a caution nearing, told their driver to stay out. When no caution came, all the other leaders had pitted before them, and they were unable to make up the loss. “We’re going to be way behind,” he told his team during the stop.

Hamlin, Harvick and Suarez were the only three leaders in the race, which was slowed by two caution periods (one was a competition yellow at lap 25). The race also went into the record books as being the fastest Darlington race in NXS history, at one hour, 28 minutes and 49 seconds.

JD Motorsports had a great showing on Saturday, placing two drivers in the top 10 — Cassill (eighth) and Chastain (10th). For both drivers, it was their first top 10 at Darlington as well as the team’s first top 10 at the Lady in Black. Even though JDM’s third entry, the No. 0 of Harrison Rhodes, retired early due to a vibration, the team has some much needed momentum as it heads into next week’s race at Richmond.

Suarez’s gamble for the win ultimately came up short, but he was able to hold on and finish the race as the highest NXS regular. In addition, he pocketed $100,000 for winning the Dash 4 Cash promotion, his second such victory of the season.

Paul Menard, last week’s winner, saw his chance to go back-to-back end not even 10 laps into the race. He felt a tire going down, pitted on lap 8 to fix the issue, and found himself two laps down. He was knocking on leader Hamlin’s door when the competition caution came out, but couldn’t pass Hamlin to get a lap back before the field was frozen. He would finish 25th, three laps down, a disappointing end to a disappointing day.

Chase Elliott had slowly clawed his way back into the title hunt in the weeks leading into this race, and expected to cut into the deficit as the defending race winner, but by the end of the afternoon, he lost all the ground he had gained. Starting seventh, he battled a tight car that the team was unable to fix during its limited time in the pits. Then, while racing Scott with 45 laps to go, things got physical between the two and Elliott threw a couple of aggressive blocks before losing the spot. Soon afterward, his engine soured and Elliott could only watch the race unfold as he puttered to a 24th-place finish.

We’ve already mentioned JDM, so let’s recognize another driver who impressed in today’s race: Parker Kligerman. Driving for Obaika Racing, the driver/NBC Sports analyst made his first start of the season and first NXS start since 2013. He brought the car home in 21st, the team’s best showing on a non-plate track and 7.7 spots higher than the team’s average finish.

Another NXS race, another dominating performance by the Cup regulars. Nothing could deter Hamlin from visiting Victory Lane, although Suarez tried his hardest to play spoiler. For a fleeting moment, it looked like fans might see an exciting end to an unexciting race. 90 seconds later, Hamlin had reeled in and passed his teammate, and the final two and a half laps were exactly the same as the rest.

Five NXS drivers finished in the top 10, but as usual they were unable to break through and collect the trophy. Next week’s race should yield the same result; no NXS driver has won an NXS race at Richmond since Jason Keller in 2002.

“Great car. You can’t have performances like that without a dominant racecar, and obviously Mike Wheeler (crew chief) and these guys have done that for me. I’m awfully proud of this team. Fun to run here in the Xfinity Series.” – Race winner Denny Hamlin

“[Chase Elliott] hit the wall… and we stayed out a few extra laps thinking that the caution was going to come out. [Hamlin] had the best car. On the long run, we could run him back down and race with him. Short run, those guys were a little bit better than we were. We were competitive with the Gibbs cars and up there racing for the lead most of the day.” – Kevin Harvick, finished fourth.

“It was crazy. It is always difficult to save fuel and try to keep the lead. I feel like we’re doing good. To leave this historic place — Darlington — with a third-place finish and with the Dash 4 Cash, it’s something good. My goal was to finish the race. Just to make laps in practice, it was tough. Everyone in Joe Gibbs Racing did an amazing job.” – Daniel Suarez, who finished third, on his late-race gamble.

Way to go there, Dennis-the-menace, and Kyle! Your teammate is running for series points, but your over-inflated egos just couldn’t stop you from helping out your teammate could they! No, you had to show just how superior you are with your cup-like cars and your cup teams against all those inferior Xfinity teams and their inferior equipment. This series is a total joke, and it’s teams like yours and Kyles that show up time after time and destroy it. Same goes for Kevin and (even though I’m a fan of his) Joey! I’m sure Junior (or should I say Rick?) could find someone else besides Kevin, and why couldn’t Roger have run Ryan Blaney in the 22? Or even, how about Parker Kligerman? Wasn’t he a development driver for Penske?

Oh well, the decision to run Dennis-the-menace and Kyle in the race was Coach Joe’s, so, I hope the Coach is happy with this. I mean, he could have brought in that Kyle-and-Denny-wanna-be Eric Jones (he’s just as big a cry-baby when he loses) for one of the cars, and find someone else for the other. But no! Coach Joe helps to inflate the egos of Hamlin and Busch! Personally, this makes the Coach just as much a jerk as his two Cup drivers.

I’m glad I chose to watch “Royal Wedding” on Turner Classic Movies. It was way more fun watching Fred Astaire dancing on the ceiling of his hotel room (A neat technical feat for 1951), than watching this farce of a series.

I’m a Joey fan myself, but I’m no fan of Cup drivers in the Xfinity series. If I didn’t kind of like some of the drivers, I wouldn’t follow the series as closely as I do. Too many wins stolen by Cuppers.

Six cup drivers entered meant I would’t. Be watching the race. And what a crowd.

What was Mr. Humbles’s excuse for finishing second? It couldn’t possibly be something he did.

Not one article on this site pointing out the absurdity of what is going on in the Xfinity series. In this last race seven of the top ten finishers were Cup drivers (if I did the math right). I’ve read in some articles on this site that having the Cup drivers race in the Xfinity series not only raises the level of competition for the Xfinity drivers but also that the fans love seeing the cup drivers in the lower tier series. This last race, (not unlike many this season) should be cause for concern for what once was a thriving series.

Imagine that you are an Xfinity team looking for sponsorship. Would a team have a better chance of obtaining sponsorship if they consistently ran in the top-5 verses running in 9th, 10th or 11th due to all the Cup drivers with their Cup teams running in the top-5 in the series? I know that some have commented that there has always been Cup drivers running in the lower series but for the most part (expect maybe for Mark Martin running for Roush Winn-Dixie car) Cup drivers normally drove for a smaller Xfinity (Busch) teams. Now it has flipped to major cup teams running Xfinity teams out of their Cup organizations. At this point I just can’t see how this is good for the series or for the few fans that are still in the stands. On the plus side it has caused a rise in tarp sales.

The racing press is an embarrassment. Too timid to actually report on the mess NASCAR has made of the lower tier series. Theses articles border on fiction. Boooooooo!

There never are articles pointing out the absurdity of the cup driver playground. The articles are the same every week, only the cup driver’s name may change week to week. Cup driver______ dominated the race while cup driver ______finished a very close second. Rounding out the top 5 were cup driver_____, followed by cup driver _______, etc. Furthermore, the biggest joke of all is when they like to keep reminding us about the owner’s points “battle”. No other series on this planet do we ever hear nor care about stupid owner’s points, but the busch series points battles are so irrelevant, I guess they have to pretend the owners points really mean something. Oh, and yes very nice crowd for the race.