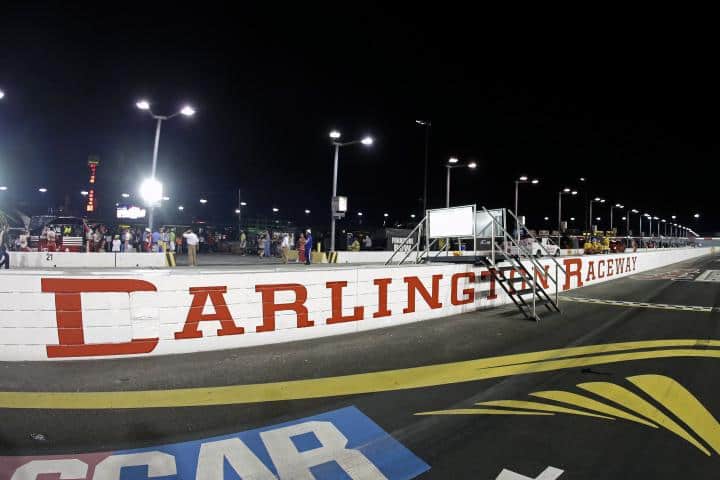 A record-breaking night at Darlington Raceway ended with Carl Edwards grabbing his first checkered flag in the Southern 500, followed by his traditional back flip on the frontstretch.

The Joe Gibbs Racing driver took advantage of a stellar late pit stop by his crew to lead the final restart with eight laps remaining, gapping teammate Denny Hamlin to get his second win of 2015 and 25th of his Sprint Cup career.

“Our guys never quit,” said Edwards. “We made it Carlington for a couple moments. This is the Southern 500, this is just – this is huge.”

Running the low-downforce package recently used at Kentucky Speedway – minus the updated softer Goodyear rubber – Edwards was more than thrilled from the race’s result.

“I don’t think I can get in trouble for saying how much I liked it,” Edwards said. “I loved it. This is as good as it gets. This is what it’s all about. We’re sliding cars, the tires are falling off. This is the style of racing that I love. If there is any chance we can run this in the Chase, I hope we can do it.”

Sunday night had the most lead changes at Darlington since 2008.

Brad Keselowski was the man to beat Sunday night, sporting his Bobby Allison throwback. The polesitter proved to be a tough pass, leading a race-high 196 laps before coming home second on the final restart.

“We were definitely right there just one spot short in the end,” Keselowski said. “Had a lot to be proud of – sitting on the pole. leading a lot of laps. Our game is strong. We have a lot of top 10s, seconds, thirds, fifths, sixths, tenths whatever it might be. I just want to turn them into wins.”

One of the highlights of the night was the dramatic three-car race for the lead with Keselowski, Edwards and Kevin Harvick. The trio swapped back and forth, whilst conserving tires, for the victory – giving fans quite the show. The exciting battle was followed by a final restart which gave Hamlin one last shot at his second Southern 500 win.

“If it’s not a teammate, maybe I carry the gas a little bit further into turn 1,” said Hamlin. “I just needed Carl to move up the race track a little bit to give me a little air on the inside and I maybe would have a run at him. My guess is he wanted to win the race just as bad as I did.”

Hamlin says the lack of long runs hurt his chances at staying up front.

“I’ve never seen a Darlington [race] with that many cautions before and our car was so fast when we got 20 laps on our tires,” he said. “We struggled on restarts so happy with third considering where we were with 23 to go.”

The Martinsville winner joined Edwards in praising the on-track style of racing shown at Darlington, calling it the package “we have to run from now on.”

“It’s unbelievable how much tire fall off there is. You’re sliding around. There’s more wrecks than usual which is a good thing because guys are messing up. That happens every now and then in racing.”

The plethora of yellows started early, with Chase Elliott and Cole Whitt crashing on the backstretch on lap 8.

The 19-year-old rookie of Elliott stayed on track, later to cut a tire on lap 229, ending his night.

Joey Logano was a familiar face in the top five all night, leading 29 laps and finishing fourth.

“We did a good job getting our Shell/Pennzoil Ford faster throughout the race – we weren’t very good in the beginning,” Logano said. “Todd (Gordon, crew chief) made some good adjustments – got our car to last longer throughout a run and be able to hang with these guys.”

Logano believes he had the car to beat at one point in the race until pit stops set him back.

“We cycled back a little bit and tried to get ourselves back to the front,” he said. “There at the end we were running fourth and the top three cars are racing each other, slicing and dicing up there and I was catching them. It was a lot of fun.”

Landon Cassill was in the top 20 throughout the night and brought his Sterling Marlin-throwback home 20th place.

My question is why is Jeb Burton allowed at this level? Yeah he qualified I get it, but damn you hate to see a dominate run ruined by a back marker who really has no business being out there, this isn’t the first time a back marker has manipulated a dominate run and changed the outcome. This is not Jeb’s first time. Yeah “that’s racing” my ass. Makes you wonder……imo of course.

Great package. The sooner the change the better.

Think I went to sleep sometimes after Jimmy Johnson spun out, woke up to see the last two laps. So how was it? Remember there were only about 25 cars on the lead lap and Edwards wasn’t one of them.