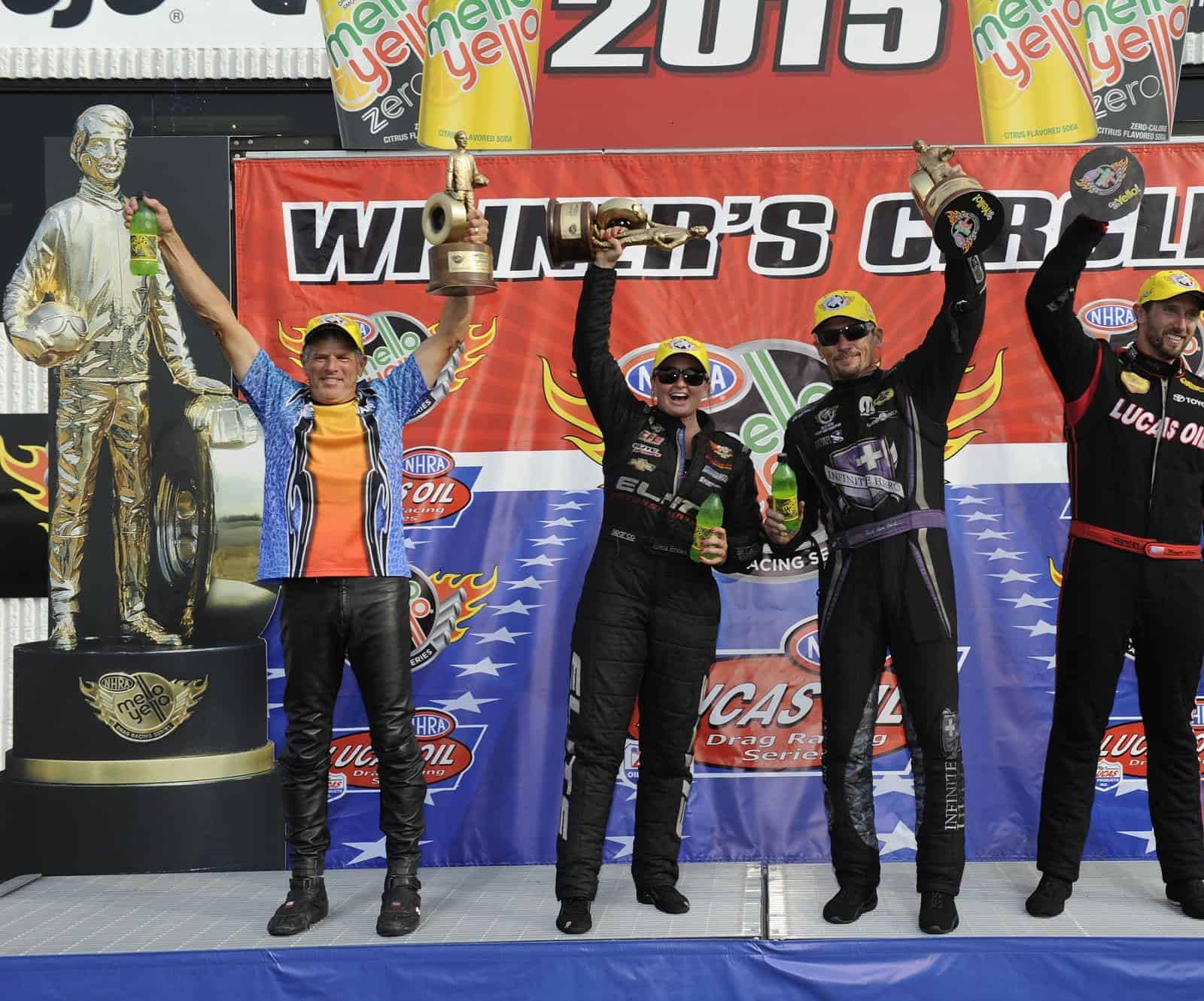 Racing action at the Chevrolet Performance U.S. Nationals, the biggest race of the NHRA season, wrapped up on Monday with elimination rounds. At the end of the long weekend, Morgan Lucas, Jack Beckman, Erica Enders-Stevens and Jerry Savoie ended up on the podium hoisting the Wally.

Lucas is racing just a part-time schedule in Top Fuel but he’s making it count, racking up a win at the Big Go. Lucas ran a 3.864 second, 319.90 mph pass to defeat Dave Connolly‘s who had problems down the track in the finals. He also defeated Leah Pritchett, Richie Crampton and Brittany Force on the way to the matchup with Connolly.

“Winning this race is absolutely massive,” said Lucas. “It’s the biggest race win I’ve ever had. I want to live in this moment for a long time because you never know when it will happen again.”

In a familiar scenario, Funny Car once again came down to a battle between Fast Jack Beckman and Robert Hight. Give another one to Fast Jack, who’s 4.058 second, 310.77 mph pass beat out Hight’s faster but losing 4.045 seconds, 309.77 mph run thanks to a reaction time advantage. One year ago in Indianapolis, Beckman went out in round one and missed making the Countdown to the Championship. What a difference one year can make.

“It’s hard to enjoy what just happened because you are worn out,” said Beckman, who also won the Traxxas Nitro Shootout on Sunday. “Yesterday after the Traxxas Shootout I was thrashed. It was a hot day that ended up wonderful. Getting through today was the key. I think surviving this is an effort unto itself. I’ve got to let that trophy sit on the office shelf and stare at it for a while to realize that we actually did it.”

Enders-Stevens continues to have her way in Pro Stock, defeating her Elite Motorsports teammate Drew Skillman to score the win, her first at the U.S. Nationals and sixth of the season. Enders’ 6.611 seconds, 209.75 mph was good enough to beat Skillman’s 6.606 seconds, 209.98 mph thanks to her quicker reaction time. She also defeated V Gaines, Larry Morgan and championship rival Greg Anderson en route to her meeting with Skillman.

This win ties Enders-Stevens with Shirley Muldowney for second on the all-time wins list for female drivers with 18.

Chip Ellis was fast qualifier on the weekend in Pro Stock Motorcycle and made it all the way to the finals, but fell to a redlight, paving the way for Jerry Savoie to score the victory. Savoie made a winning pass of 7.011 seconds, 193.02 mph. He also got by Chaz Kennedy, Steve Johnson and Hector Arana, Jr. to get to the finals.

The Chevrolet Performance U.S. Nationals also marked the end of the regular season, locking in the top ten drivers for the start of the six-race Countdown to the Championship which kicks off at the next event, the Carolina Nationals in two weeks.

With the release of Spencer Massey, combined with a run to the finals, Connolly made his way into the 10-driver Top Fuel field, locking up the 10th and final spot. Funny Car came down to a battle of the ladies, as Alexis DeJoria and Courtney Force battled for the final spot. Ironically the two faced off in the first round, with Force taking the win over DeJoria, setting up the steal, but a loss by Force in round two (she needed to make it to the finals to pass DeJoria) gave DeJoria the spot.

Although Pro Stock rookie Skillman came up short to his teammate in the finals, he will still make the Countdown field in his first season. With spots up for grabs in Pro Stock Motorcycle, fast qualifier of the weekend Ellis made it all the way to the finals and made his way into the Countdown. Scotty Pollacheck grabbed the final spot when Angelle Sampey lost in the semifinals. Sampey left the line with a big advantage but had mechanical troubles down the track.