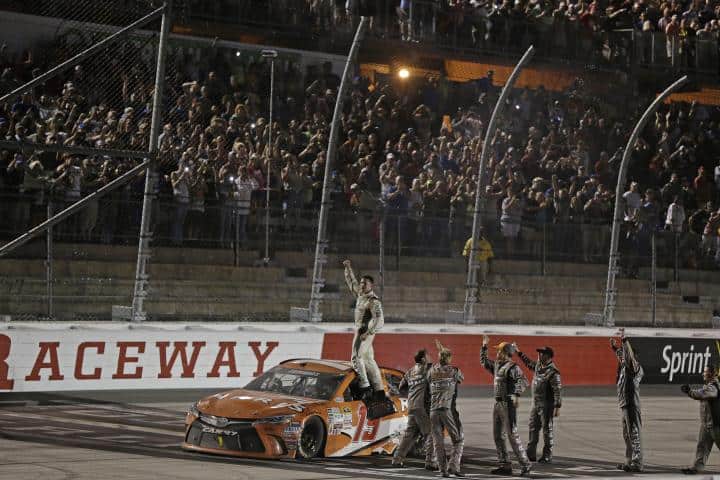 Cup Series: Darlington Lives Up to the Hype – All of the hype leading up to Sunday night’s Southern 500 put NASCAR in a win or lose situation. With so much excitement brewing for the throwback weekend theme, the action on the track, desperately needed to entertain, and entertain it did. Leading up to the race – and all throughout – social media was abuzz, and you could even feel the energy through the television. Slipping and sliding, beating and banging and the ability to actually drive up behind another competitor and make the pass stick. It was the kind of racing that picked me up and dragged me into the sport 21 years ago, and it pulled me right back in once again.

“I look at it as, ‘Were the fans entertained?’ When I looked down at lap 10 and toward the end of the race they were on their feet,” NASCAR executive vice president and chief racing development officer Steve O’Donnell said after the race. “I think if you were to ask most race fans here tonight if they enjoyed four-and-a-half hours of racing action, I think they’d say yes. For us, it’s always about the entertaining racing on the track. I think the drivers delivered that tonight.”

The key here is how NASCAR moves forward, though. While we already know the sanctioning body is sticking with the normal 2015 rules package for the Chase (YAWN!), moving forward to 2016, NASCAR has a critical decision to make. This lower downforce package that created so much great racing at Kentucky earlier this year and again in the Southern 500 has the ingredients to bring the sport closer to its heyday from the mid to late ’90s. Either the sanctioning body can play it conservative and only minimally change the package for next season, or it can go bold and put this package, along with a tire that wears out before the end of a fuel run, in place.

“I really think we’re at a bigger crossroads than most people realize. I think this is an opportunity for the sport to go in one of two directions,” race winner Carl Edwards said. “They can go the direction of making the sport competitive because the cars are easy to drive and everyone’s car is about the same and we can basically have Talladega every week, or they can go the direction of making the cars extremely hard to drive and showing the massive talent of the drivers, the crew chiefs and the pit crews, and I hope that they take the latter. I hope they really keep going this direction.”

In the end, we’ll have to wait to see what NASCAR announces in the coming weeks, but I have high hopes if the series returns to a package that mirrors the one run at Kentucky and Darlington that puts more of the racing into the drivers’ hands and less into the teams’ engineering programs. – Beth Lunkenheimer

Xfinity Series: Another Dominating Day for Denny Hamlin – For a moment, it appeared as if Daniel Suarez could hold off Denny Hamlin to win his first Xfinity Series race. But with fresh tires, nothing could stop the No. 20 car from entering Victory Lane on Saturday afternoon. Hamlin dominated at Darlington, leading 117 of 147 laps.

Leading over 100 laps for the fourth time in his 10th start of the year, Hamlin gave Joe Gibbs Racing its eighth win of the year in the NXS. In a 1-2-3 JGR finish, the organization dominated the day. Kyle Busch started 36th, but ultimately flew by traffic, as expected. But the big story is Suarez, who surprised many by being able to conserve enough fuel until the end of the race, taking home the Dash for Cash bonus.

There were a few surprises at Darlington, including the JD Motorsports duo of Landon Cassill and Ross Chastain. The two finished inside the top 10 after saving enough fuel to make it to the finish. Parker Kligerman stepped in a racecar for the first time since Darlington in 2014. He finished 21st for Obaika Racing, which gave the new team its best finish at a non-plate track.

Chris Buescher had another impressive run on Saturday. Outrunning his championship rivals, the No. 60 car was the highest running NXS regular until Suarez entered the top five in the final 15 laps since he didn’t pit. Buescher’s title lead is back up to 29 points ahead of Ty Dillon, who finished 15th on the day. Chase Elliott ran just outside of the top 10 for the majority of the race, but finished 24th after experiencing engine issues late in the going. – Joseph Wolkin

Formula 1: Hamilton Masters Monza – Lewis Hamilton completed a weekend sweep at the Italian Grand Prix, leading all three practice sessions, earning the pole position for the race and then leading from start to finish to claim his 40th career win. Sebastian Vettel, to the delight of the partisan Ferrari crowd, took second with Felipe Massa, himself a former stalwart at Ferrari, rounding out the podium.

A couple moments of late race drama unfolded for both of the Mercedes drivers. With five laps remaining, Hamilton, who already held a 20-second lead, was told by his engineer to push but with no explanation given. The only words offered were that things would be discussed after the race. It turns out that the team realized that the tire pressures on their cars were under scrutiny, a matter later concerned after the race.

Nico Rosberg, who had already been forced to run an older engine with six grand prix races of wear and tear, also faced the under-inflated tire concern, but it mattered little for the championship contender. Already watching the title slip away, Rosberg’s engine blew up with just three laps remaining as he looked to finish in the third position. The setback now puts his 53 points behind Hamilton, after they both escaped any penalties. – Huston Ladner

NHRA: Big Go Qualifying, Traxxas Shootout Victors, and 2016 Schedule Highlight Busy Weekend – Eliminations for the Chevrolet Performance U.S. Nationals are not until Monday, but qualifying was complete as of Sunday. Action was rained out on Friday, but after two Saturday and two Sunday rounds Larry Dixon in Top Fuel, Jack Beckman in Funny Car, Greg Anderson in Pro Stock and Chip Ellis in Pro Stock Motorcycle will start on Monday as the No. 1 qualifiers.

In addition to qualifying, the Traxxas Nitro Shootout was also contested over the weekend, with Antron Brown taking the win for Top Fuel on Saturday. Brown raced his way past JR Todd and Richie Crampton in earlier rounds before going up against Doug Kalitta in the final round. It was Brown’s first Traxxas Nitro Shootout win and gives him bragging rights in addition to a $100,000 payday.

“The main thing is we were able to sneak away with that win,” said Brown. “When you race a Kalitta car in the final for $100,000, they’ll throw a big run on you. We both didn’t make it down cause we were pressing hard and we knew what was at stake.”

Giving Don Schumacher Racing a double-up in the all-star event, Beckman took home the $100,00 and the honors in the Funny Car round of the Shootout on Sunday. Beckman defeated Courtney Force and Ron Capps in earlier rounds before facing off against Robert Hight in the final round.

“I think we have shown everyone how good we are when conditions are favorable,” said Beckman. “We’ve been spectacular in hot conditions too but we haven’t had as many runs in it over the last month and a half. I think we just reinforced that this Infinite Hero team has it no matter how hot the track is.”

The NHRA also released the 2016 schedule over the weekend. As usual, the season will open and close at Pomona and the U.S. Nationals will take their traditional Labor Day weekend. The schedule currently consists of 23 events, mostly in the same order as 2015. Charlotte 1 and Las Vegas 1 swap, with Las Vegas taking the opening weekend of April and Charlotte moving to a date later in the month, and Epping and Englishtown swap order from 2015. For the moment, Heartland Park Topeka is not on the schedule, but NHRA officials are talking with the new ownership group for the track and could add an additional race to the schedule at a later time pending the outcome of those discussions.

Frontstretch will still feature a full recap of all the Monday eliminations action on our NHRA news page. – Toni Montgomery

Short Tracks: 59th Budweiser International Classic – In the preliminary events leading up to Sunday’s 59th Budweiser International Classic 200 at Oswego Speedway (N.Y.), the trend was to expect the unpredictable in the closing laps. It turned out that the main event for the non-winged super modifieds would be no different. David Danzer and defending race winner Otto Sitterly each spun out on their own while taking their turn out in the lead during the second half of the race. Tire and equipment conservation was key in the end, as Bob Bond made a pass for the win on a green-white-checkered finish to take his third victory in the prestigious race. Pole winner and leader during much of the race, Michael Barnes, lost the top spot and finished second. – Aaron Creed