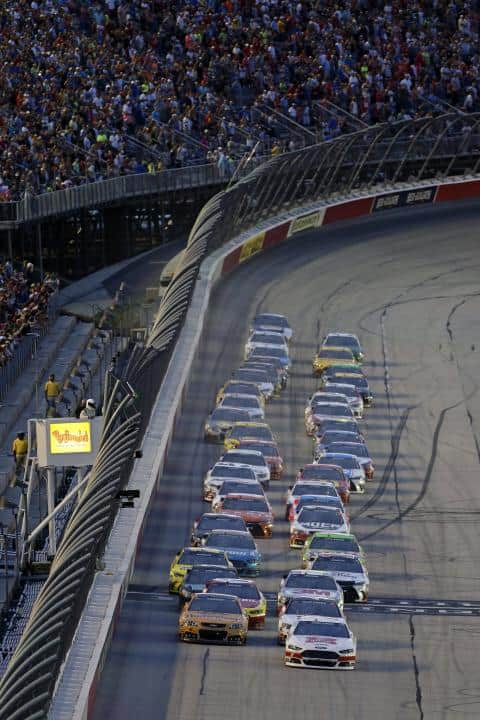 Perhaps it was fitting that Carl Edwards won the Bojangles’ Southern 500 after being such a huge supporter of NASCAR’s decision to try a low-downforce package, especially since the high-drag, higher downforce package appeared to be a failure in both of its outings.

Edwards was the first to address the new package when the cars unloaded at Kentucky earlier this year, and said he was happy that NASCAR listened to the drivers. He also predicted the racing would be even better had there been time to match the tires to the low-downforce package.

Apparently, he was right because he mastered the combination Sunday night at Darlington Raceway.

More importantly, putting Edwards’s win aside, there was action throughout the field – and I don’t mean Danica Patrick and Ricky Stenhouse Jr. crashing within few laps of each other. There was passing, there was bumping/banging (for those who like that sort of thing) and there was hard-driving with cars being pushed to the edge. Hell, we even saw Tony Stewart lead a few laps for a change.

It was almost like a throwback race to the 1970s, sans the leaders lapping the field 13 times and people dying in horrific crashes – you know when everything was so incredible, “back in the day.”

The takeaway from Sunday night should be that the race package provided the most-exciting action on the track in a while. Again, I have never thought of any NASCAR race as being “boring,” but just about anyone could see an improvement. Going forward, NASCAR needs to take what it has learned from Kentucky and Darlington and implement it at other tracks. That being said, kudos to everyone involved for taking chances and trying to see what would and wouldn’t work on the track.

Sometimes you have to fail in order to figure how to succeed, and no, I didn’t come up with that on my own, I stole it from someone in the sport whom I have come to have a great deal of respect for.

Will the low-downforce package work everywhere? The answer to that question, most likely, can’t be found in a simulator, as we have already seen. It has to be tested. The drivers believe the package puts control back into their hands. They would know best, since they are the ones going 200 mph on the track and trying to keep from running into each other or slamming into a wall.

There has been a lot of debate about whether NASCAR should take the low-downforce package and implement it in final 10-race shootout. NASCAR officials said they weren’t going to do that. So be it. At least, next year the naysayers, who criticize the sanctioning body for every little decision it makes, will have one less thing to complain about in 2016.

I’m sorry to say I read your article while passing time, while awaiting my food order. I see you have somewhat changed your attitude toward what can make an improvement in the racing, but you just can’t stop yourself from taking a shot at racing history or those who remember it fondly. I am sure those who post comments here, did not relish the severe accidents and death that may have occurred during that time in racing history, but enjoyed the weekly spectacle and pageantry when it came to a track near you. It is amazing that you continue to be published by Frontstretch, since until today I had refrained from reading or posting on your NASCAR Company line tripe, and from what I can see, I am not alone. On the bright side, if the Frontstretch gig dries up, you can always audition for the Public Relations Manager for MWR, and keep us posted on all the good things happening in the shop.

Talk about cheap shots! And you wonder why those that have been fans of Nascar BEFORE it was ‘the latest thing’ feel as if they are now ignored and expendable? Seems to me that many of those ‘old timers’ are responsible for bringing their kids and grandkids to races, thus creating the next generation of fans. If you alienate them, there goes a good part of your future.

Gentleman, Jerry is a totally owned subsidiary of NASCAR. You won’t see anything in his columns that is not the stuff of political campaign door hangers. Might I suggest that you join the rest of the ever dwindling fan base and not waste your time with his drivel.