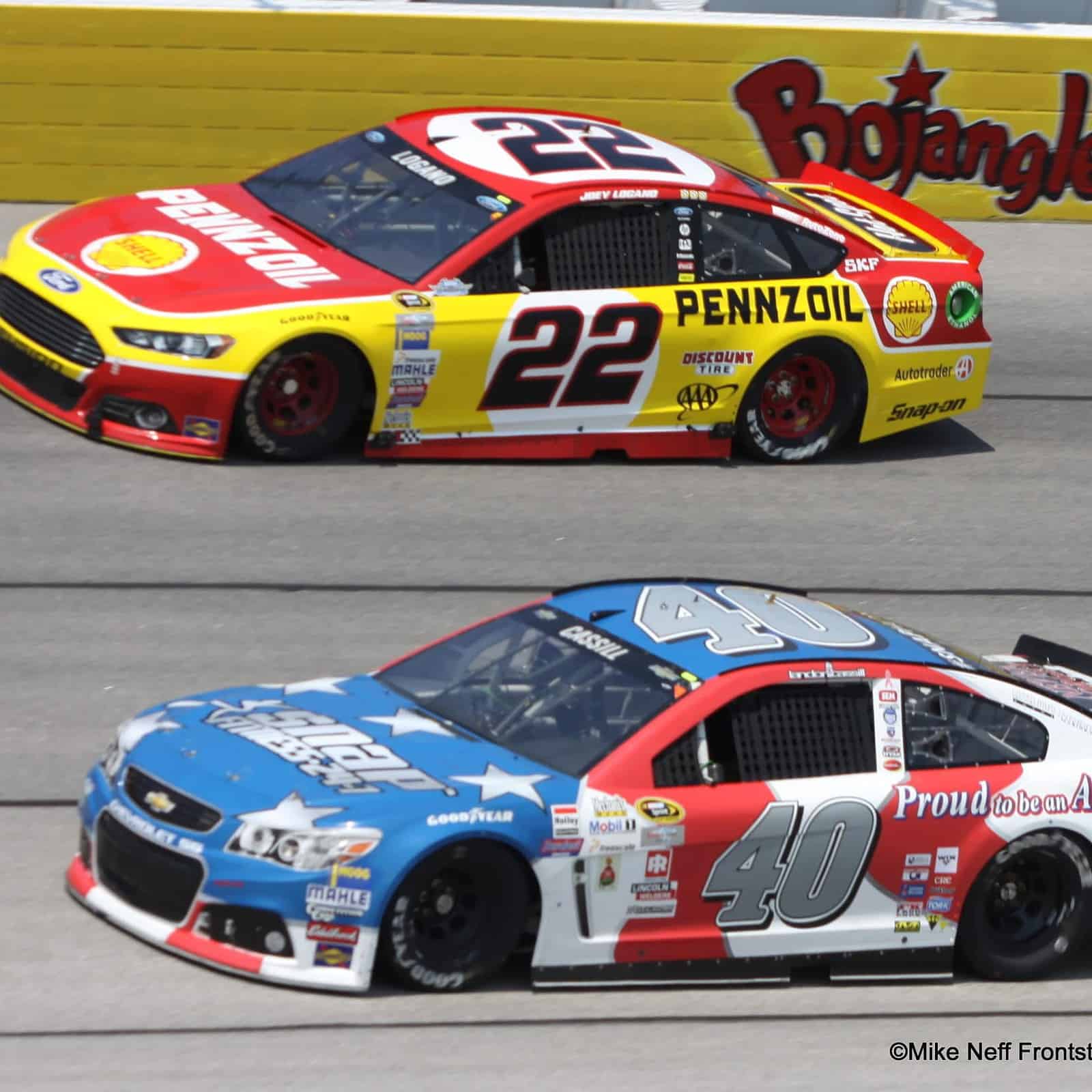 For all that was said about the throwback weekend at Darlington Raceway, the nostalgia did little to change the fact that The Lady in Black is still Too Tough to Tame.

Oh yes, I did just work both nicknames into one sentence, and that’s because on a night filled with nostalgia, the track earned every single distinction that has ever been bestowed upon it. Darlington stripes became Darlington dents. Drivers weren’t driving through the corners, they were drifting. Tires were so valuable that they practically developed their own black market by the end of the night.

In other words, it was the Darlington of old, the kind of event that the track is famous for but we hadn’t really seen in recent years.

The weekend was enjoyable even before the first green flag dropped. When NASCAR returned Darlington to Labor Day weekend, following almost a decade of scheduling it elsewhere, the move sparked a mass of “throwbacks” that ranged from old paint schemes, to old sponsor logos, and even a throwback racing booth for a period of time during the race. It truly was a spectacle.

However, the race would have been exciting even without all the added flair, something that has become a bit of a rarity. With Darlington serving as the second race with the low downforce package, in a season when NASCAR continues to throw aero changes, many were wondering if Darlington would put on the same barn burner of a show that Kentucky did earlier this season with a similar package.

It did, and the response was the same: a nearly unanimous cry of “more, please!” from virtually everyone with a say-so. That would be fans, drivers, crew chiefs, the media.

And it really didn’t matter how their respective teams did. Of course race winner Carl Edwards was a fan, but everyone from drivers who crashed out to the second-place finisher were stoked about a return to a racing package that puts racing back in the hands of the

drivers (even when that doesn’t always work out so well in their favor).

“It was difficult but a lot of fun,” said Ricky Stenhouse Jr., who wrecked on lap 199 and finished 38th. “We enjoyed it. It is a lot of fun out there sliding around and tires wearing out and I think this is what we all wanted. It just bit a few of us.”

By all accounts, this should not have been a “fun” day for Stenhouse. He was involved in a wreck that was, at least partially, his fault. In his words, the car “just snapped around” as he drove underneath the No. 55 of David Ragan, a move rather common throughout the field. If Stenhouse could find something positive to say about this package, I’m sure anyone could.

Polesitter Brad Keselowski finished second to Edwards, but by all accounts had the best car of the night. He led 196 of the 367 laps — more than any other driver — and had the race lead right up until about 10 to go. Though he was disappointed and a bit frustrated with having lost the race after such a dominant night, he was still pleased with the package.

“I loved it,” he said. “It separates the racecar drivers from the pretenders, and that’s the way it should be.”

Eighth-place finisher Dale Earnhardt Jr. also had good things to say about the package, despite having not nearly enough speed to win the race. In fact, Hendrick Motorsports as a whole was rather a non-factor up front.

Again, exactly the same sentiments despite a completely different day.

Fourth-place finisher Joey Logano, 18th-place Greg Biffle, third-place Denny Hamlin and practically anyone who was asked all essentially parroted one another in advocating for this package to be run in the future and testifying to how fun it was to drive despite crummy days in some cases.

“It’s the package we need to run from now on,” said Hamlin. “It’s unbelievable how much tire fall off there is. You’re sliding around, there’s more wrecks, which is unusual, but it’s a good thing because guys are messing up. That happens every now and then in racing. It’s a lot of fun from our perspective and it’s something that we can look forward to.”

Ironically enough, though, it has been Edwards that has been the biggest proponent of moving to a lower downforce package similar to the one in Kentucky and of course winning the race didn’t hurt that standpoint. Based on the reaction from other drivers’, though, it’s doubtful it would have made a difference.

“I don’t think I can get in trouble for how much I liked it, but I loved it – this is as good as it gets,” Edwards said in Victory Lane. “All the Sport Clips folks were there too off of turn 2. This is what it’s about. We’re sliding cars, tires are falling off – this is the style of racing – if there’s any chance we can run this in the Chase, I hope we can do it. It was an awesome day. Thank you Joe Gibbs (team owner), thank you very much.”

JORDAN: Past Failures Lead to Success in Low-Downforce Package

NASCAR has stood firm in that they are not implementing a new package for the Chase, not wanting to give an advantage or disadvantage to a team that has already prepared for the Chase with the current setup or forcing them to change tactics in the middle of the sport’s version of the playoffs. The logic behind it is understandable, but it’s hard to watch a race like Darlington and know that future races are returning to the follow-the-leader and clean-air-is-king style of racing that has become so commonplace.

NASCAR has — unsurprisingly — not announced what package they will be running in the sport next year, but you have to think they would be crazy not to go with the lower downforce package. There is so much that fans, NASCAR, the drivers, the media disagree on, however, for this package to have so little disagreement and so many voices asking for the same thing, is rare. The reaction is positive, the racing has been stellar (or at least has the opportunity to be), and the headlines are promising. I’m sure when the package is run 36 weeks of the year that not every race will be as exciting as Kentucky and Darlington were, but the point is that it presents the opportunity. The current package only allows for excitement on restrictor-plate tracks, pit stops, and restarts.

Honestly, I think Edwards put it best in the winner’s press conference after the race:

“I really think we’re at a bigger crossroads than most people realize. I think this is an opportunity for the sport to go in one of two directions. They can go the direction of making the sport competitive because the cars are easy to drive and everyone’s car is about the same and we can basically have Talladega every week, or they can go the direction of making the cars extremely hard to drive and showing the massive talent of the drivers, the crew chiefs and the pit crews, and I hope that they take the latter. I hope they really keep going this direction.”

He’s absolutely right and NASCAR has, even this season, opted to go with the higher downforce package. At best, those events have been received neutrally. At worst, the races have been disregarded as boring and uneventful. How NASCAR is still even thinking about going in that direction is beyond me.

At the same time, I’m beginning to doubt that they are. They can’t have almost everyone in the garage area saying the exact same thing with gusto and bravado and expect to shut it down next season in the interest of control. Business or not, the very basic part of this sport is the on-track product, and NASCAR has been rather sensitive to that especially this season. The fact that they are even allowing for select races to run a downforce package as a glorified test session is a step in the right direction, despite how that might be initially perceived. It means they’re still considering the change. Which is incredible considering how reluctant the sanctioning body has been in making a decision that would be considered reversing course.

I just hope they make the right decision. If 2016 rolls around and they decide to go with a higher downforce package, it’s going to be a huge punch in the gut to everyone who had such high praise for these races. Everyone else has done their part. The drivers sing the praises of the package and race their butts off in the event. Fans show up to the track and watch both at home and in the seats. Various media members walk and talk about how great the racing was (and mean it). The vote in which direction to go is a landslide.

NASCAR, it’s your turn. The decision is rather clear. Make the right one and the possibilities are endless.

While the low-downforce package is better, and certainly better than that disastrous high-drag package that destroyed the racing at Michigan and Indy, clean air is still king. Once a car was able to get out front, it was “See ya!”. If the Engineers can come up with a way to overcome that, NASCAR will have something.

Ken, I think part of that also would be allowing the teams to run different gears, shocks, and suspension verses running a spec car that they are allowed to do little with. I agree that clean air is still a problem but overall what I saw last night was a step in the right direction.

I totally agree. Take away the IROC rule package and give the teams some latitude to set the cars up however they want.

” “I loved it,” he said. “It separates the race car drivers from the pretenders, and that’s the way it should be.” ”

I guess Johnson is a pretender. It explains the rules for the chase.

Seeing “Lucky Dog 10 Danica Patrick” is getting old (48 spin when she needs one). Appropriate.

I was surprised nothing stupid happened to Edwards at the end. He didn’t drift back at the end.

Once again a car that shouldn’t have been in the race caused the last caution.

Your 1st paragraph said it all.

At first glance at these Darlington race articles it seemed like I missed a real good race. Reading further reinforced why I stopped watching NASCAR mid-season. In short, the winner of a 500 mile race was determined by a 8 lap dash and won by a driver who at some point was gifted his lap back. A much bigger decision than down force is at hand involving integrity of what used to be a sport.

Everyone knows that Wrestling is fixed, and even the tame racing press occasionally admits that NASCAR is “manipulated” to enhance entertainment value. How else can one explain the winner of this race even being on the lead lap let alone in a position to win. But is fixed/manipulated just a distinction without a difference? I hate to be so cynical but I think NASCAR craves the Toyota money so much that the time has come for a Toyota champion. I would suspect that they will do all that is possible short of an outright fix to see that it happens. If I mute my TV and keep very quiet I can hear my brain cells dyeing everytime I watch a NASCAR event.