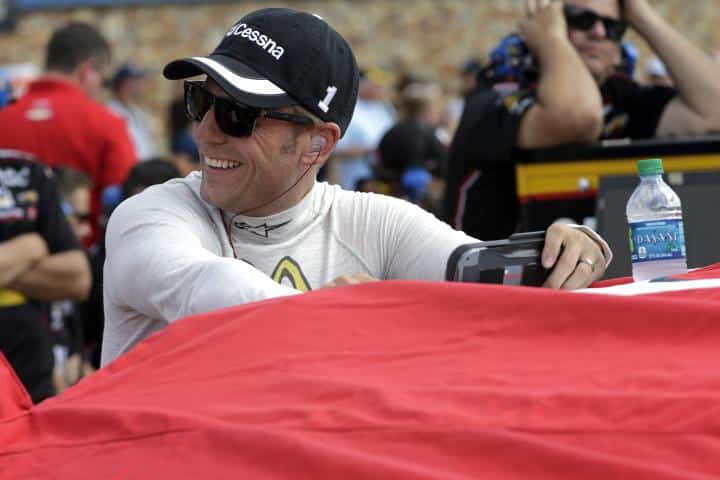 Jamie McMurray just has to take the green flag at Richmond International Raceway next Saturday night to lock himself into the Chase via points. The amiable 14-year veteran of some 463 races has won some of the biggest races in the sport – the Daytona 500 and the Brickyard 400 – yet has never once made the playoffs in his long career. But provided he shows up at the iconic 3/4-mile venue, qualifies and starts the race, McMurray will finally break that duck and get his shot at running for a championship.

“Honestly for the last 10 weeks we have been racing,” said McMurray in a post-race interview with NBC Sports. “Literally if you don’t have a car that can win you are just trying to get the most points you can.”

And the magic number for points for McMurray now stands at one; a point he’ll knock off once he motors past the start-finish line this coming Saturday night at Richmond. So with a playoff berth, freak incidents aside, now locked up how far can McMurray go? Could he be this year’s Ryan Newman and go deep into the playoffs – even all the way to Homestead-Miami with a shot for the title? On the surface it seems unlikely, but you would have said the same thing about Newman last year. Perhaps this year is when McMurray makes up for lost time and missed playoff berths and really challenges. Stranger things have happened, folks.

The Best Is Yet To Come For Kyle Larson

Rewind back to the start of the season and many of the savvy prognosticators predicted that the next driver to get a maiden victory would be Kyle Larson. 25 races in and that crucial first win still eludes the Elk Grove, Ca. native, and outside of leading 90 laps late on the Spring race at Bristol Motor Speedway, he hasn’t looked like a true contender for Victory Lane in 2015. Of course that could change this weekend at Richmond if he was to finally garner that elusive win, but the likelihood is he will end up zero for 65 Cup attempts by the end of Saturday evening.

All that being said, I’m still very much of the belief that the best is yet to come for the 22-year old, and without the pressure of having to race his way into the playoffs, I’m expecting Larson to close out the season strongly and perhaps finally pick up that long awaited victory. Sure, he could race his way in at Richmond, but if he did, that would be a huge bonus given the way he’s run most of the year – a 19.8 average finish. It was, too, great to see how much he embraced the throwback weekend at Darlington Raceway this past Sunday. He really got into the part, growing a moustache, donning a curly wig and embracing the role as the driver of the No. 42 Mello Yello machine. Side note: kudos to long-time NASCAR sponsor Target for even considering this move and for embracing it with such alacrity.

So whilst this hasn’t been the season he would have drawn up back in February, the best is yet to come for Larson and I wouldn’t be surprised to see that start to come to fruition over the final 11 races of the year.

And speaking of the best is yet to come, with the way things are looking, Kevin Harvick is the driver to beat headed into the final 10 races. Sure, he hasn’t won since he went back-to-back at Phoenix International Raceway and Las Vegas Motor Speedway in races number three and four of the year, but he has shown a remarkable level of consistency we’ve not seen since Jeff Gordon finished the 2007 season with six wins, 21 top fives and 30 top 10s. As things stand, Harvick has that pair of wins, 18 top fives and 22 top 10s – not to mention 1,450 laps led, a whopping 613 more than Joey Logano, who has the second most laps led with 837. In total, Harvick has a ridiculous 10 second-place finishes in 2015, and if he carries that same level of reliability into the Chase and stays out of trouble, it seems unfathomable that he won’t be one of the final quartet running for the big prize at Homestead-Miami Speedway.

Long story short, then, Harvick is the driver to beat headed into the 2015 playoffs. I’m expecting him to be in contention all the way through to the waning laps at Homestead in late November. Anything less, given how strongly he has run, would be a failure.

The Lady in Black

I’ll add my voice to the many before me and simply say: wow what a Southern 500 that was this past weekend. Every detail was accounted for, and the marketing folks at Darlington Raceway who made it happen should be mighty proud of a promotion that everyone from broadcasters to teams to drivers to fans embraced wholeheartedly. The only tiny blemish is that a throwback scheme didn’t end up in Victory Lane, but as with life, I suppose, you can’t have it all. Having not been a fan of the sport back in the Ken Squier and Ned Jarrett era the highlight for me was listening to them broadcast a portion of the race. I’m sure you all have your own personal favorite moments so let me know in the comments section below. Certainly, though, this is a template for what can be done when the NASCAR community comes together and I’ll be interested to see what the encore effort is next year.

And from one iconic venue to another this Saturday night, under the lights, as we head to Richmond International Raceway for the final race of the regular season. This will be Cup race number 119 at the 3/4-mile D-shaped oval – a record that stretches all the way back to 1953 with the first race won by none other than the great Lee Petty. Back in the spring, the first of two races at Richmond was won by Kurt Busch, who led 291 of the 400 laps in one of two victories he’s picked up on the year so far. The real question this weekend is can someone not currently locked into the Chase race their way in. The odds would suggest not, but as I said above with McMurray, stranger things have indeed happened. Should be a fun one to watch this weekend.

No way can McMurry be the next Newman… he has a neck and personality.