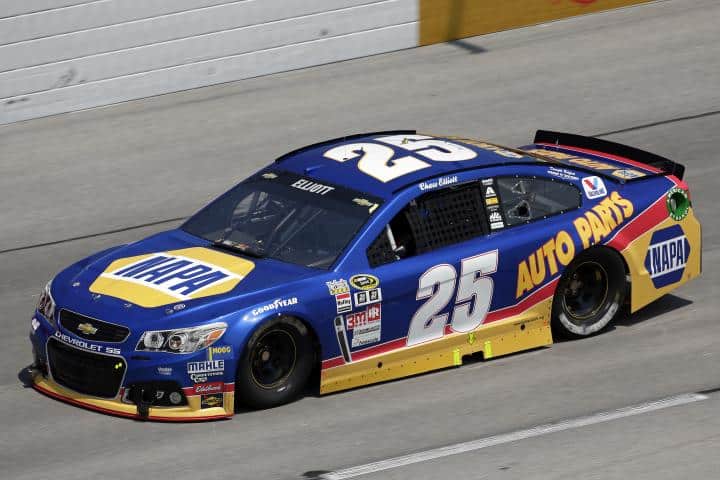 It’s nice when it works out to see a NASCAR event live. That was the case for me this weekend. It was my first trip to Darlington and my first night race. It was a great experience and worth every penny to make the effort to go there. So this week’s hot and not, will come from a little different perspective than normal.

Maybe this should be called the backflip section, as Carl Edwards won his second race of the season on Sunday night. There were a lot of factors that led to Edwards’ win. One, is that he had fresh tires to use late the race, something that not all teams had the luxury of due to the race-record 18 cautions. Also, what looked like a move that belongs on the cold part of this list, turned out to be a genius one later. When Edwards stayed out instead of pitting early in the race, he was the expected sitting duck on the old tires and went from first to 20 something in a matter of a few laps. He eventually ended up two laps down and looked like he was done for the evening as far as having a chance to win. But not using those fresh tires early, allowed Edwards to have them later in the race. So, sure, maybe the Brad Keselowski crew can cry a little bit as the final yellow appeared to cost him a victory, but give Edwards and his crew chief Darian Grubb a little credit for getting the end game right, which isn’t always easy to do.

The trend for the last 15 or so years has been for NASCAR to shorten its races and it’s easy to understand why. There is always a fear that if the event lasts too long and it’s not guaranteed to be exciting at the end, the audience will tune out. However, it was nice to see a 500-mile event Sunday, even with as long as it lasted, that allowed drivers or crews a chance to comeback if they made a mistake early. Edwards’ winning would be Exhibit A for this. So, it’s good to know going into a race that your driver and his or her crew don’t have to be perfect to win, which is actually a reason to stay tuned in to a race after your driver has an early mistake. That’s because you know there is still a chance for a good finish, or even a win.

And finally, here, a bit about the new rules in place for Sunday night. Personally, I think it’s great that drivers have to manage tires on the track and that crew chiefs have to manage their strategy around how many tires they use. It’s just one more small way to measure just which team is the most complete. It’s not just an automatic for decision for the drivers or the crew chiefs. It puts the human element more back into the equation and in an era where that is more and more being removed from sports, it’s good to see the opposite happening in NASCAR.

Part of the fan experience in going to these races is getting to see how drivers interact with fans during the manufacturers’ question and answer sessions. This is also one of the few times that regular paying fans get a chance for autographs. I did get to a couple of these sessions Sunday afternoon. Tony Stewart was entertaining as always with his answers, mainly admitting his infatuation with getting a flamethrower maybe was not his most well thought out plan. When Stewart left the stage, he didn’t appear to sign any autographs, a bummer. Next up was Kurt Busch, who answered questions with enthusiasm and came off well during his few minutes on stage. He did take a minute to sign a few autographs, but as he hopped in his cart to leave he didn’t sign for a couple of small children (we’re talking ages 5 or 6 here). It’s true that a driver simply can’t sign for everyone, but here’s hoping Busch would like about a 30-second re-do of that moment (for the record, they were not my children or anyone I know). Lastly, there was Ryan Blaney and while I didn’t get to hear but the very end of his time on stage, the young driver stopped and signed for all of the about 20 people in line as he exited the stage for his car. Now, that’s how you win fans for life.

In the Cooler (Cold)

Sunday was my first experience with the new souvenir setup by NASCAR. I won’t deny that in some ways it seemed more efficient. It was easier to find the stuff I was interested in for a particular driver. And the checkout line moved quickly. It was also interesting to note that there were separate trailers for Keselowski and Joey Logano, so maybe team owner Roger Penske is being a bit of a rebel here, or probably figures he can make more money doing it his way. (Editor’s note: Team Penske is under a contractual obligation with their retailer.) Whatever. In spite of all of the logical arguments about how the new system is better, I miss the seeing all the souvenir trailers in their rows. It was more personal experience that way and if that’s missing, then to me, that’s a step backwards.

You know Darlington can be a tough teacher, and Chase Elliott found that out the usual way on Sunday night, by banging the wall on more than one occasion. Eventually, he hit it hard enough to knock him out of the race Sunday, and he finished 41st. This is not to say that Elliott doesn’t have a bright future, because he does. But it is to say that when he takes over the No. 24 next year for Jeff Gordon, give Elliott some time to learn, too.