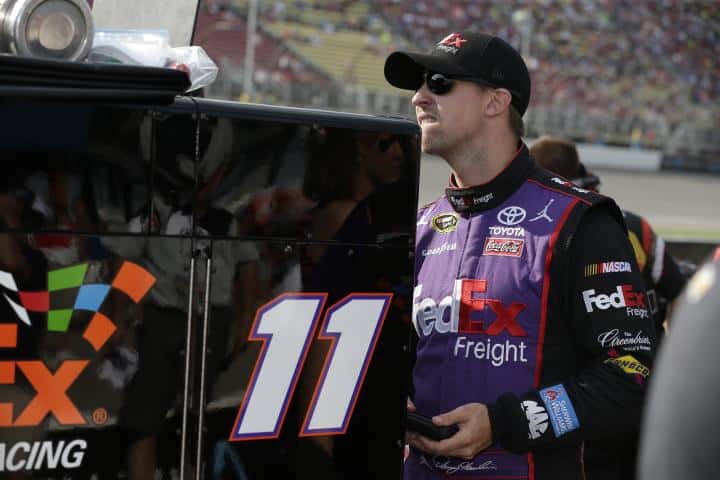 Despite the issue, Hamlin has been cleared to race for the remainder of the season according to a release issued by Joe Gibbs Racing Wednesday afternoon. He is currently 11th on the Chase Grid, assured of a spot with one race remaining before the playoffs begin.

This injury is the second such one for Hamlin while playing basketball this decade. In 2010, he tore his left ACL before the season began and had surgery following a victory in the spring Martinsville race. Hamlin would return to the car without missing any races, winning seven more times and finishing second in the championship standings to Jimmie Johnson.

It’s also the fifth major health issue Hamlin’s fought since 2010. In addition to the ACL tears, the driver missed four races in 2013 following a crash at Auto Club Speedway that resulted in a compound fracture in his lower back. In 2014, Hamlin missed the race at Auto Club due to a piece of metal in his eye.

During a rain delay at Bristol this April, Hamlin had a neck spasm that kept him from returning to the car following the delay. Erik Jones replaced Hamlin, his first foray in Cup Racing. He would finish 26th, although the result was credited to Hamlin because he started the race.

Hamlin will require surgery for his injury following the season.

This is what happens when you get old. Pretty soon Gibbs is going to prohibit him from playing any sports during the racing season.

Good grief, he is worse than a old person that needs looking after.

he better hope he doesn’t get involved in a wreck where he needs to get out of the car quickly. i wouldn’t want to be having to mash the gas pedal with torn acl. guess this will be excuse for poor chase performance.

I remember DH from his LMSC days and have several unfond memories of him, his attitude, and spoiled whiney brat approach to everything. I’m just hoping karma kicks in and he’s the next Brian Vickers and ‘coach’ pulls an RG3 on him… second tier or sub.