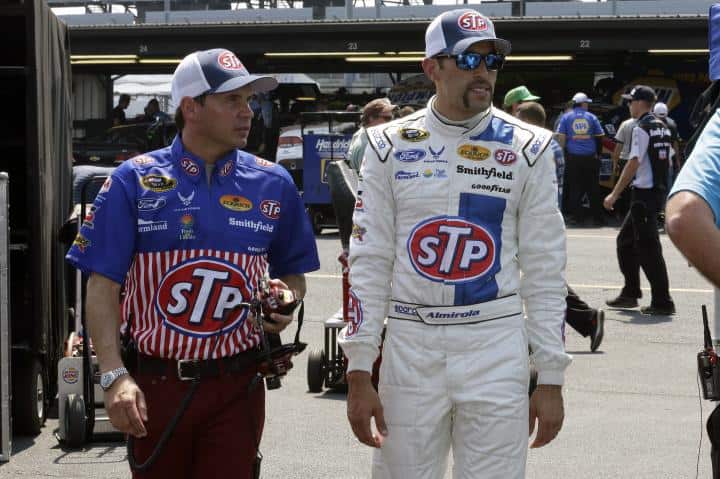 Did You Notice? NASCAR enters Richmond without a compelling “make the Chase” story for a second straight season? Two years removed from the “Spingate” scandal we have yet to produce a sense of urgency that makes the regular season finale the “must see” event it used to be in the early years of NASCAR’s playoff format.

Last season, Greg Biffle entered Richmond on the bubble but sitting with a comfy 23-point lead over nearest competitor Clint Bowyer. This year, it’s Bowyer on the bubble but his lead is even stronger: 28 points over mediocre competition. No offense to Aric Almirola, but I don’t think he’s in position to pull off a miracle with season numbers that include one top-10 finish and only three laps led. Compare that to part-timer Josh Wise, who’s run just 19 races with a handful of underfunded teams yet has the exact same resume. Talk about a watered-down playoff system…

But I digress. Technically, Almirola joins Kasey Kahne and over a dozen other drivers who can enter the Chase field by winning Richmond. Sure, Kahne has won there in the past; others, like Tony Stewart and Kyle Larson have been running better overall as of late. However, a quick look at Richmond’s recent races shows the chances of someone breaking through are miniscule. Since 2007, this short track has run 17 races, and 13 of them have been won by just five men: Jimmie Johnson, Clint Bowyer, Kyle Busch, Denny Hamlin and Kevin Harvick. All of them are safely locked into the playoff field this season and are in position to run up front Saturday night once again. If they fail, Kurt Busch (who dominated the spring race) and the Team Penske cars of Joey Logano and Brad Keselowski (defending race champion) enter this weekend on top of their game.

For those seeking an upset, the only winless driver this season who led laps at Richmond in the spring was Jamie McMurray. But even McMurray, after years of missing the Chase is set to end his record 0-for-11 streak of missing the playoffs by simply starting the Richmond race this weekend. Others who will make the Chase on points, like Jeff Gordon have run strong in the recent past there as well.

What does that mean for guys on the outside looking in? Like Kahne, Larson, Biffle? They’re the longest of longshots, making it more likely this race will be about preserving momentum for the playoffs instead of trying to establish it, a limited number of major moves by teams focused on the week ahead instead of what was once one of NASCAR’s “can’t miss” tracks. There’s a reason big NBC chose to televise the Darlington race and not this Saturday night finale….

Did You Notice? How the Darlington race had a ratings increase over 2014? The 3.4 overnight Nielsen number is one of only a handful of events NASCAR can point to this season as a major success. The track itself was over 90% capacity, filled with fans cheering their new low-downforce package that has produced quality competition every time out.

Fans will point to the new package and the return of Darlington’s race to Labor Day Weekend as the reason for the increase. I think those elements have already been well documented both here and by others; if NASCAR ignores the positive response here when considering the 2016 rules package they’d be foolish. But there’s another, simpler reason NASCAR should note as it sets the schedule for 2016 and beyond: the race occurred on a Sunday night. Rather than stick with the “Saturday night special,” stubbornly adhering to the one night where the 18-34 crowd is away from the television more than ever these days the sport put a race on a Sunday night where people are likely to be home, either working the next day or preparing for a Labor Day BBQ. Sometimes, it’s not about what the entertainment is but serving it at a time and place people are capable of watching.

It’s a lesson NASCAR needs to learn in the face of shocking numbers like the 1.9 Nielsen overnight filed after Bristol’s iconic Saturday night race. That should have been one of the sport’s most popular events and instead? It’s made to look like Bristol is dying on the vine. I know a Sunday night event might be more difficult for people to attend but if the sport wants to keep some of these night races going for television that’s when they’ve got to be. Just like you’re not going to compete against the NFL, stock car racing will always play second fiddle to the long list of entertainment options for today’s generation during a typical Saturday.

Did You Notice? How the Sprint Cup field is currently set to lose two teams for 2016? Michael Waltrip Racing’s official filing to cease operations reveals a sobering reality their two-car team isn’t going to be bought; instead, it’ll be dissolved into pieces with no investor riding in on a Superman coat ready to start anew. It means that if recently released Bowyer can take his sponsors and merge with another team instead of starting over (HScott, despite repeated denials and Richard Petty Motorports are the hot rumors in my world) we’re going to be stuck at 42 full-time teams entering the 2016 season unless someone like Ryan Blaney can step up to run all 36.

The alarming cutbacks have NASCAR considering options from franchising to simply cutting the field from 43 to 40 cars. I think both need to be considered carefully. Sure, in the wake of MWR’s demise there’s a natural desire to start protecting the race teams you have left. But at the same time, doing so while making it difficult for new owners, cars, and manufacturers to enter the sport dooms stock car racing over the long-term. What’s going to happen when Penske, Jack Roush and Rick Hendrick aren’t around anymore? Father Time is the one race we never win. NASCAR needs to find a way to entice more Rob Kauffmans to come in at a bargain price instead of balancing too far the other way. Yes, Hendrick, Penske et al deserve to keep their fortunes but not at the price of seeing the sport die off as soon as they retire from racing.

Good that the final pre-chase race is a dud,. Anytime NASCAR doesn’t get the game 7 moment that they try so hard to manufacture by manipulating the rules is a win for those of us that despise Brian and his stupid chase.

I hope 3 of the 4 drivers still in the hunt at Homestead blow their engines on the first lap.

Paul L
Reply to  Bill B

3 of 4? Last year, I was hoping all 4 would be involved in wrecks and the champion would be the driver who was able to limp around to a 25th place finish. Then maybe they would ditch this elimination and possibly the whole chase crap. Probably not but it’s a nice dream.

I was at the race, so I didn’t see it on TV. It was nice to see a good crowd at the track. I thought this trial package has done pretty well as far as putting on far better races than the garbage that was run at the beginning of 2015, but of course, NASCAR in its infinite stupidity, would rather run the garbage than just have the teams run this package for the chase. I’m no fan of the Chase in any of its iterations and if they are going back to boring endless parades on 1.5 mile tracks (also known as business as usual) for NASCAR, well, I won’t be interested in this crapshoot either. Unless Gordon and his team somehow manages to pull their heads out of their you know where and suddenly become competitive, in which case, I might be somewhat interested. Surprised as heck, but at least interested. However, based on their performance this season and the fact that the pit crew gave away a decent finish at Darlington, I think the chances are extremely low.

And Tom, if you are expecting NASCAR to change its mind on anything much, well, I hope you aren’t too disappointed when it doesn’t happen. Let’s face it, it took them 12 years to finally and I’m sure begrudgingly to put Darlington’s race back where it belonged and should never have been moved from in the first place. These days I expect very little from them and so when they do something that I consider “right”, well, that’s a nice surprise and a novelty.

Kasey K. has been in a “slump” for some time. I was shocked that HMS resigned him for another 3 years. I don’t get that one at all. I think his young female fans that brought T-shirts have matured by now and have moved on.

And now the season of the horrible “Chase” is upon us. Ugh.

DID YOU NOTICE: The fans really are not at all interested in the Chase despite the constant hype. Where do I get my Tarp nation shirt?

Since its the political season: depends on what the definition of fan is. The people who, like myself have been around since the 60’s when it was largely a regional sport? Those who came in during the boom years, and consider themselves long time fans? Or those from the Chase era who are seeing it return to a regional sport?
I daresay that each looks at the sport/business somewhat differently. Different expectations and thoughts as to how it could be improved. Ultimately the Chase era will dominate that that’s the way things are headed, so be it.
Tarp nation tee-shirt? How about a lovely souvenir seat removed from a track near you (wherever that is)?

What would be fitting this weekend is someone like Almirola or Kahne winning the race and knocking Bowyer and MWR out of the Chase. That would be the ultimate karma.

Correct me if I’m wrong but isn’t every Labor Day weekend race held on Sunday night? The author sounded like this was something new.

Since we are back to the old package for the Chase, ole 6 time will magically come back to life and threaten for #7 and I will lose interest quickly. Guess Mr Hendrick didn’t like the new package.