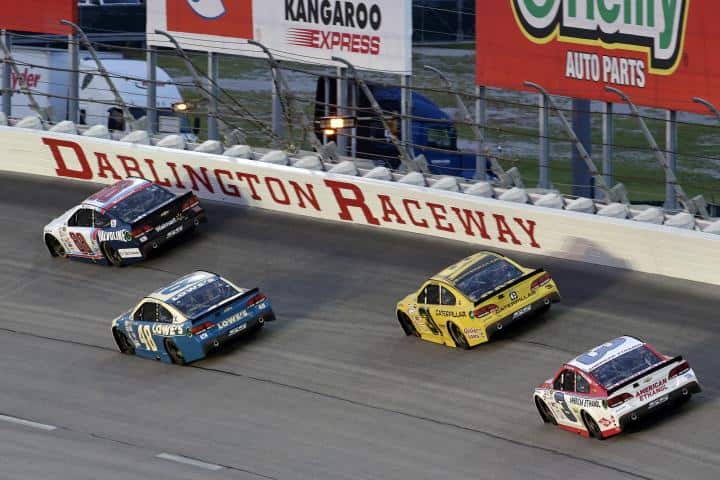 What a weekend we had at Darlington, huh? The racing was a drastic improvement from what we’ve seen in 2015 and the throwback weekend was a lot of fun.

My highlight of the weekend was watching Ken Squier, my idol as a child, calling a race again with Ned and Dale Jarrett. Squier just has a way with words as he describes the action that immediately draws you to the TV screen. You could clearly see he and Ned Jarrett had a blast working together again and it was great to see. That, added in with the paint schemes and all the other fun things that happened this weekend made for a great feel of the older days. I hope we see it again next year when we return to Darlington.

Q: Hi Greg, Can you tell me which truck teams use the Cup Series pit crews? – Steve

A: Hi Steve, thanks for reaching out. This is a great question and one that may not have a complete answer. Usually a lot of the Cup Series pit crews are used by NASCAR Camping World Truck Series teams during companion weekends. The Truck Series runs several companion events during the season and during those races there are several teams that may use Sprint Cup Series pit crews.

During non-companion weekends, it’s virtually impossible for any Truck Series teams to use a Cup pit crew. Sometimes it may happen but it’s highly unlikely and unusual.

To answer your question, you really need to look at the teams and who they are affiliated with as to who uses Cup Series pit crews. For example, when Cole Custer runs his No. 00 truck for JR Motorsports, that team usually uses the No. 41 pit crew from Kurt Busch‘s Cup car. Busch drives for Stewart-Haas Racing and Joe Custer, who is Cole Custer’s father, is an executive at the organization.

Also, there are several teams who get engines or information from Sprint Cup Series teams. Erik Jones is a development driver for Joe Gibbs Racing, although he runs for Kyle Busch Motorsports in trucks. Jones’s team and the other KBM trucks may use JGR pit crews whenever possible just to get that slight advantage off pit road. Same deal with Brad Keselowski‘s Truck Series teams. Whenever possible, you may see a Sprint Cup Series pit crew on both trucks from time to time. Also the GMS Racing teams may use Richard Childress Racing’s pit crews especially when the Dillon brothers drive the No. 33 truck.

Hope that answers your question.

Q: This weekend’s race at Darlington was one of the best of the season. The new rule package NASCAR put into effect seemed to work, so why is NASCAR going with the old rule package for the Chase when it’s not nearly as exciting as the package we saw at Darlington? – Dave, Harrisburg, Pa.

A: Hi Dave, thanks for the question and it’s a good one. This topic was highly debated during the season. NASCAR has decided to stick with the 2015 rules package mainly to keep the championship race as competitive and fair as possible. NASCAR met with the teams and drivers during the season about this issue and the feedback they received all led to the decision to keep the rule package they have had for the majority of 2015. I think teams and drivers wouldn’t feel right about a driver hitting on a new rule package in the Chase and winning the championship based on that fact alone. The long and the short of it is, NASCAR and the people in it believe the 2015 champion should be based on the 2015 season and 2015 rule package, although the rule package we saw at Darlington would certainly provide more excitement.

Q: Kasey Kahne is my favorite driver, but I am nervous about him missing the Chase. What do you think his chances of making the Chase are this weekend at Richmond? – Justin – Grand Rapids, Mich.

A: Hi Justin, thanks for the question. Kahne’s 2015 season has been a unpleasant surprise to the NASCAR world as the team has been an utter disappointment. When this season started, it looked very promising after Kahne reunited with former car chief Keith Rodden. Rodden had great success as the crew chief of Jamie McMurray‘s No. 1 car in 2014 and everyone thought Kahne would rebound and have a strong 2015 season.

That hasn’t happened, obviously, and now the team has put itself in the position where it’s all or nothing at Richmond. He won his first race here back in 2005 but only has six top-10 finishes at Richmond since then. He hasn’t led a significant amount of laps there since 2011 and has only done that twice.

Whether some people like to admit it or not, Hendrick Motorsports is having its worst season in a long time and the 5/24 shop has not won a race all year long. JGR and the Toyota horsepower seem to be a lot stronger than the Hendrick cars and in recent weeks Team Penske has hit on something as well.

I also think Kahne needs an attitude adjustment. I understand he may be frustrated but a couple of times this season I’ve heard Kahne saying “I don’t care,” when referring to his Chase chances. That’s not good, especially with a team with sponsors that pay them a lot of money to make the Chase. I find it hard to believe that Kahne actually doesn’t care but that kind of language can be damaging to a team’s confidence. I think there is a very slim chance Kahne pulls off a win this weekend.