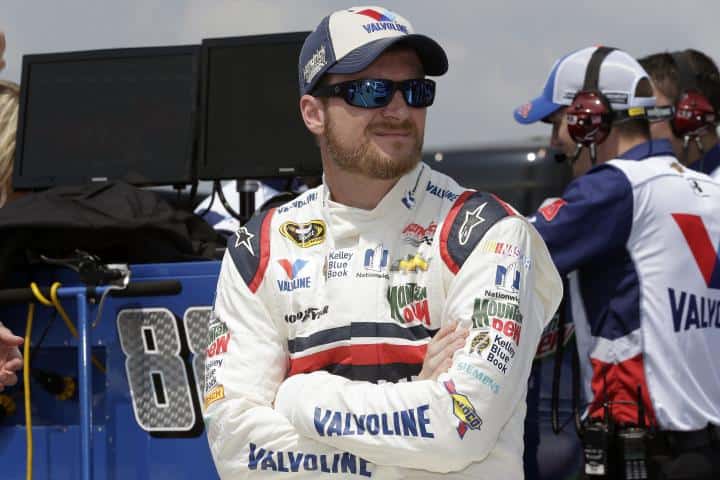 Out for my first ride in the turbo XP1000 Razor fun stuff little hot 113 degrees !!!!! pic.twitter.com/TsfrJeUzP5

Greg Biffle had some fun in the desert last week on some off-road vehicles during some down time. Biffle, a Sprint Cup Series driver for Roush Fenway Racing, has shared his love for these types of vehicles in the past. Despite the 113-degree weather, this looks like a lot of fun!

NASCAR drivers and working out go well together. Sometimes during those workouts we learn some lessons about ourselves. Blake Koch, a NASCAR Xfinity Series driver, went a little above and beyond during his workout and ended up with blisters on his hand. Safe to say, Koch has some battle scars to share with everyone!

Kevin Harvick did his own version of a scavenger hunt for one lucky fan last weekend in the state of South Carolina. Harvick left a goody bag at one of the many Jimmy John’s locations for one of his followers to find. We’re betting that Harvick made one lucky fan very happy!

Here at this amazing race track in Paradise.. All the big boys are here racing.. #go karts pic.twitter.com/pTvhV5HciD

Elliott Sadler found something fun to do in the Darlington area on Saturday following the NXS race. Sadler attended a local dirt track that was holding go-kart races. Wheeling a go-kart around a dirt track would certainly be a thrilling thing to do!

Clint Bowyer posted this tweet at the conclusion of the race on Sunday at the Darlington Raceway. The race consisted of 18 cautions that broke the previous track record of 17. We also hope that nobody picked “caution” as their drinking word either.

Damn that was some fun!! I loved the new low downforce package @TooToughToTame. The guys got the car dialed in there at the end.

Dale Earnhardt Jr. shared his love for the rules package used this past weekend at the Darlington Raceway after the race. Earnhardt sent out this tweet, saying he had a lot of fun with the package. Safe to say, a lot of fans and media members agreed with this tweet.

Carl Edwards and the No. 19 Joe Gibbs Racing crew members had some fun after their win on Sunday. One crew member, unsure of where the idea originated from, taped part of the “D” in Darlington to make it appear as a “C”. The end result? Carlington! This is one of the most interesting post-race celebration highlights of the year!

To tired today to deal with you. 4year old with a wake up call a few hours after I got home last night. https://t.co/c8WvutkkSO

Jamie McMurray and NASCARCasm sure have been having a lot of fun lately on Twitter. NASCARCasm joked on his Twitter page that he has one week to make sure McMurray cannot start in next Saturday’s race. For those who might not get the joke yet – McMurray just has to take the green flag to lock into the 2015 Chase for the Sprint Cup on Saturday at Richmond.

Aric Almirola and his block ran into a little issue on Monday as they lost power. Almirola posted that he felt sorry for everyone else without a generator to power numerous things around the house until it’s restored. Let’s just hope they weren’t without electricity for a long period of time.

Keelan took another big step of his life on Tuesday morning. DeLana Harvick, the wife of Sprint Cup Series driver Kevin Harvick, posted this photo of their son Keelan right before his first day of preschool. Safe to say, Keelan is growing like a weed!