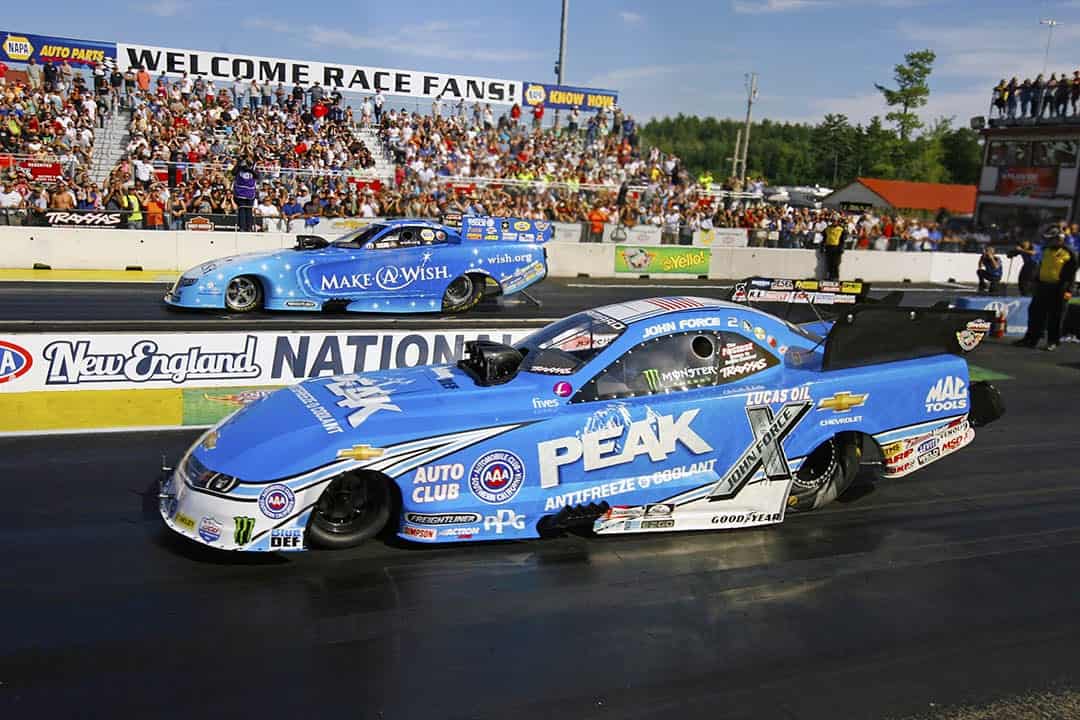 Award-winning actor John Schneider is a perennial favorite among NASCAR fans thanks in large part to his iconic role as ex-stock car driver Bo Duke in the classic ‘80s television series The Dukes of Hazzard. A multi-talented entertainer, Schneider’s career has spanned more than 35 years as an actor, singer, director, producer and writer; he remains active both in front of the camera and behind the scenes.

Schneider should be back on racing fans’ radars this year with his new movie, Adrenaline, just released on DVD and VOD. In the film, Joseph Jenkins (Michael Rosander) is a drag racer whose life is turned upside down after a near-fatal car crash leaves him a paraplegic.

Feeling discouraged and questioning God’s purpose for such an accident, Joseph believes his life is over. But his hospital roommate, Elijah Salisbury (Gregory Alan Williams) offers Joseph compassion and prayer, encouraging him to get back to living.

When Joseph returns home, an old friend of his deceased father, Paul Sharpe (Schneider) steps in and helps him back into a racecar, using hand controls and learning to race all over again. When his father appears in several of his dreams with a message, Joseph discovers there is a greater meaning to life than glory and fame.

Frontstretch spoke with the 55-year-old actor about Adrenaline, its potential allure to NASCAR fans despite not being a NASCAR-based movie, his studio and much more.

Becca Gladden: I want to start with the end of the movie. The very last line says, “It’s not what you drive – it’s what drives you.” Do you think that’s the overall message of the film?

John Schneider: What a great question. I think it is, but let me elaborate on that. I think we are all designed to do something very specific – designed by God to be a hammer or a nail, or a piece of wood, or whatever it is we’re supposed to be and supposed to do. Working within your design, or searching for your design, is what drives people. It’s what drives me – working within my design.

Many times, I hear people who can’t wait for Friday because they endure a job that they can’t stand. I feel so sorry for those people. How can you be any good at something that you don’t like? I love what I do, and I have since I started at 8 years old – every minute of it. It’s hard work – it’s not nearly as glamorous as people think. But, even if it was, it is still hard work. I can’t remember who said it, but, “love your work and you’ll never work a day in your life.” I believe that’s what should be driving people.

My dad passed away a year ago in November at 84 years old. He loved what he did. He did automobile upholstery and airplane upholstery. He worked for himself and he did that for my whole life. My mother couldn’t wait for Friday. So, I’ve seen both sides of it and it’s sad to me.

The film is about doing what you’re made to do and, in Adrenaline, it’s about doing it for the right reasons. It’s not about the fame and the glory. There are a lot of other reasons to do it. The wonderful scene at the end with the young man working with other drivers in wheelchairs is fantastic – so motivating, so inspirational. Yet it’s still a movie about racing, which I love.

This is not a preachy movie. It’s a movie about racing cars – going as fast as you can, getting off the line in the right amount of milliseconds. It will excite you. But there’s also an element in there that is very important, which is being in touch with your design. And, in my character’s regard, the need to apologize is very important. I love that my guy seems to have been carrying around a weight. A lot of people talk about forgiveness, but you can’t walk up to somebody who hasn’t apologized and say, “I forgive you.” They’ll look at you like, “What are you talking about?”

Gladden: Even though Adrenaline is not specifically about NASCAR, do you think it will appeal to NASCAR fans and motorsports fans in general?

Schneider: Oh, yes. There is an adrenaline rush related to all motorsports. There’s the horsepower, the feel of the engines, the sound of the engines. At NASCAR, when they say, “Start your engines,” there is a feeling out there in the crowd – the crowd just goes wild. It’s the same in drag racing. These drivers are going so fast. It’s unbelievable that cars can go that fast in that short an amount of time and how they keep these things on the track is just unbelievable.

People love NASCAR because they love their drivers and want to see their drivers win, but there is also a certain element – we buy into the danger of NASCAR. There is that element in drag racing, but it’s times 100 because they are going so fast, so quickly and so close together. If you aren’t into drag racing yet, I urge you to watch this movie because it will help you get hooked on it. Racing is an adrenaline rush like nothing else.

Gladden: Music is very important to you and has been throughout your career. I really enjoyed the soundtrack in Adrenaline. The music adds a lot to the film.

Schneider: They crafted a very nice film and that’s hard to do. That’s a lot of things to have in your recipe: speed, horsepower, music, redemption, forgiveness. They’ve got it all in there. It’s really a fantastic film.

Gladden: You talked about what drives you and working within your design. Tell me about John Schneider Studios. It sounds like an amazing place.

Schneider: It’s a great place just outside Baton Rouge, Louisiana. I’ve got 58 acres here with several wonderful old homes, a river, a lake, a swamp, a couple of alligators – it is Louisiana, after all – a swimming pool, a barn, two sound stages. We have editing facilities. It’s a place where people can come and make their movies on a budget. It doesn’t look like a studio. To me, it looks like a wonderful back lot where you can come and film at any number of different locations and never have to move the coffee pot far from the kitchen. Usually movies are very nomadic – we film here, we film there, we put all the equipment in trucks and go 50 miles and film somewhere else. Here at the studio, you show up, you park your car, and there’s no limit to the number of locations where you can film except whatever your imagination limits you to.

There were six movies filmed here last year, we’ve done three this year, and we start another one next Monday. It’s a very creative and wonderful place. My house was built in 1910, so it’s kind of delightfully rustic with tall ceilings and wonderful moulding. I’m a big fan of this kind of film making. We do have two sound stages and we film in there occasionally but this is a place where, if you need complete control over a swamp, a lake, a river, a beautiful barn or a dirt road out in the middle of the country somewhere, this is where you come. This is where people need to film.

Gladden: What is the takeaway that you want people to get from watching Adrenaline?

Schneider: For my character, I talk about this need to apologize. I want people to search their history and see if they need to apologize to somebody for something – see if they’re carrying some weight around that they don’t need to carry. You have to ask yourself if that’s in there, because it’s not as obvious sometimes as you may think.

I talked to my son about a year ago – there were some things back when Chasen (Schneider’s son, 23 years old) was little – it may sound silly, but it could be as little as, “Remember that time we were at summer camp and you reached for the hamburger and I said whatever I said? Well, I’m sorry I did that.” It could be something that happened 15 or 20 years ago. We used to say that you need to get something off your chest. People don’t say that any more, but I think there’s something there.

After you see Adrenaline, ask yourself if there is a need for you to apologize. Honestly, I think the need to apologize is more important – at least for me, at this stage in my life – than the need to forgive. Forgiveness requires that someone apologize to you, but apologizing is something you have to do solo, all on your own.

So, take a look back, pray about it, and say, “Hey, have I wronged somebody somewhere and buried that in my ego?” Do I need to apologize to somebody? Then, see what happens. I think you’ll be surprised.

always liked John Schneider from Bo Duke on the Dukes of Hazzard, to Jonathan Kent on Smallville to his evil role on The Haves and Have Nots. great actor and a race fan. look forward to checking this film out.

When I recently saw “Adrenaline” again and STILL shed a few tears, that had to be a tribute to the entire “Adrenaline” team! Go see it!!!