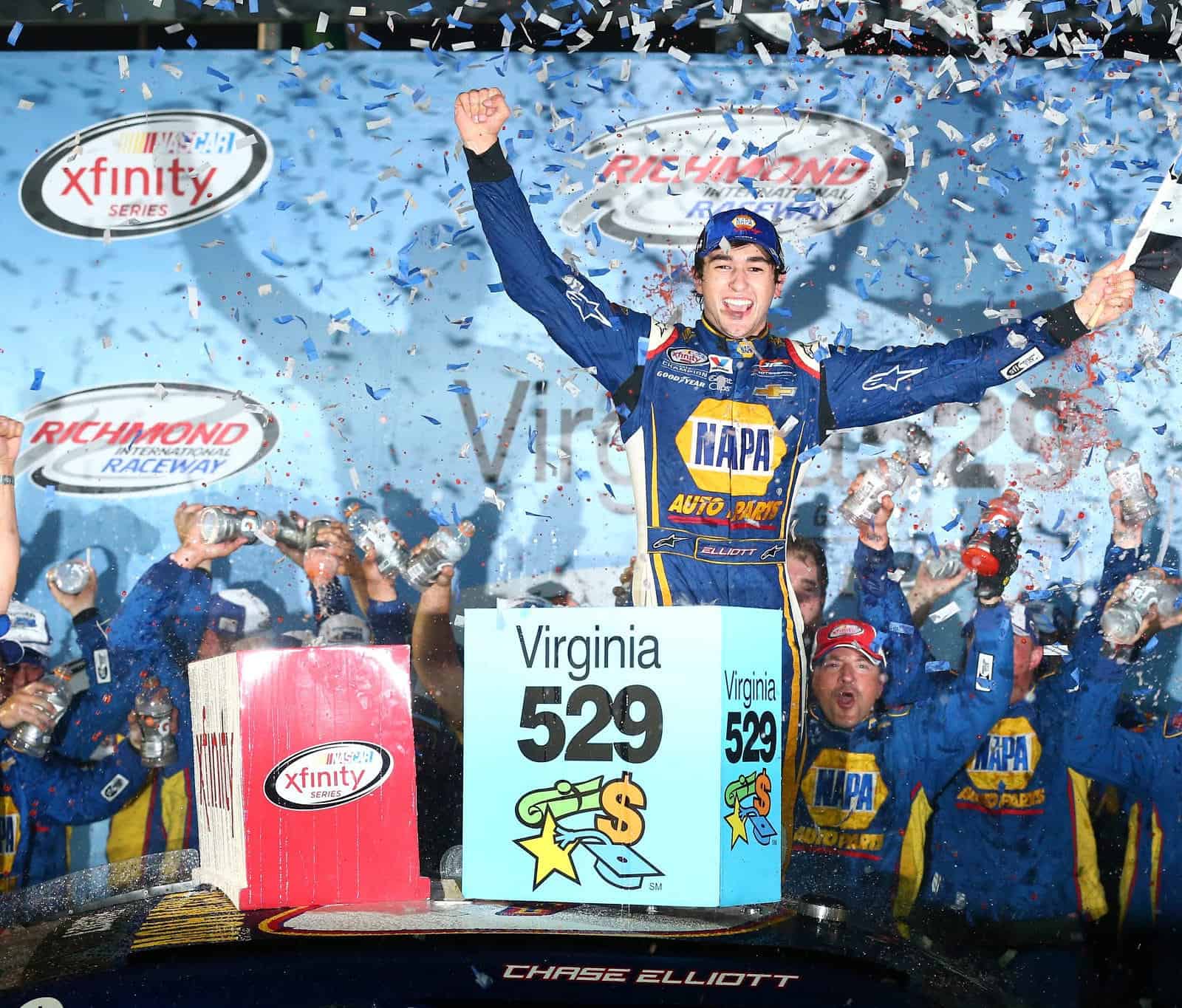 Sprint Cup Series regulars had won the last 20-plus races in the Xfinity Series at Richmond International Raceway… until Friday night that is. Chase Elliott, the defending NXS champion, broke a 39-race winless streak and pulled away for the victory in the Virginia 529 College Savings 250 following a quick stop from his pit crew in the final stop of the night

After a rough go of it in recent weeks, Elliott was seemingly losing sight of the NXS points lead, but moved one spot up to second and now sits 21 points behind points leader Chris Buescher.

Though Elliott ultimately led the most laps, he faced some stiff competition from series regular Brian Scott and Sprint Cup Series regular Kyle Busch. Busch finished second after leading 78 laps while Scott led 64 laps and finished third. In a night where it was expected that Busch or Joey Logano — the two who led the field to the green — would run away with the race, NXS regulars turned out to be a pleasant surprise.

Logano ultimately finished fourth and didn’t lead a single lap while Erik Jones finished fifth. Regan Smith was right behind them in sixth while Josh Berry finished seventh in his first career NXS start in Richmond. Ty Dillon, Austin Dillon and Buescher rounded out the top 10.

There were a total of six cautions that spanned 48 laps in the 250-lap race.

When Elliott won the race, he leapfrogged Ty Dillon in the standings. Dillon is now third, 27 points behind Buescher. Smith (-49) and Elliott Sadler (-105) round out the top five with only eight races remaining.

Scott is one of the best drivers never to win a race in this season. He has led 199 laps this season and had a car good enough to win in a handful of races. Circumstances — sometimes luck, sometimes driver — have kept Scott out of Victory Lane when it seemed to be a foregone conclusion that he would eventually be there.

This is especially true at Richmond. Scott has led more career laps at Richmond in the NXS than he has at every other track combined. After the race, he made the comment that eventually he would win at Richmond. In fact, it was Scott who first ran Busch down in what appeared to be another Joe Gibbs Racing runaway and was one of Busch’s fiercest competitors until Elliott came into the picture.

Forget Richmond. Scott is going to win a race somewhere eventually. This team and driver are just too good not to.

Berry was an unexpected contender. Berry, a JR Motorsports development driver, only had two previous starts in the NXS and both were in 2014. Berry’s mission was to log laps and gain experience. Instead, he wound up posing a legitimate threat for the victory. Though he was never able to work his way all the way back up to the lead, Berry was in the top five for most of the night and had one of the fastest cars.

In fact, JRM as a whole was rather dominant—in a way that has come to be expected from the likes of JGR and Team Penske. JRM’s average finish was 4.6 on the night and led a total of 103 laps led between Smith and Elliott.

Sadler also had an awful night. Debris from his car brought out the third caution of the day after he hit the wall due to a cut tire. He finished 24th, four laps down. He now sits fifth in points, 105 points out of the lead. I think it’s safe to say his championship chances are all but shot. This season certainly has not been the year that Sadler and his team had hoped for. Sure, fifth in points isn’t too bad considering the competition, but only 22 laps led and four top-five finishes certainly wasn’t what the team was expecting after 25 races.

It could be worse, but if there was still any hope at all for Sadler to have a shot at the championship, it died in Richmond.

The first caution of the day was on the very first lap and involved five drivers: Benny Gordon, Joey Gase, Carl Long, John Wes Townley, David Starr and Jimmy Weller III. They all drive for smaller teams that really can’t afford to have large wrecks like they were swept up in Friday. It’s one thing to see large level teams with multi-million dollar sponsors wreck. It’s another when something like a major crash could effectively kill a team’s season and budget.

Sure, you never want to see that sort of thing in any team, but it doesn’t leave the same sick feeling in your stomach as it does when seeing a team that works on a shoestring budget see an entire car get totaled. That sort of thing can be devastating to the team and my heart ached for those five teams.

Not all of their days ended immediately after the wreck. Townley and Gase went on to finish the race so the damage must not have been as detrimental to those two, but no one ever wants to see a wreck like that.

This undoubtedly has to go to Berry. As mentioned previously, Berry’s main objective was to gain experience and come away with a good finish. Not only was he able to accomplish those two things, but his ability to consistently run in the top five with the likes of Busch, Logano, Scott and Elliott was highly unexpected. Had things gone a little better on the restarts and/or pitstops, perhaps Berry would have even been able to lead some laps and put up a fight for the victory with Elliott.

Team owner Dale Earnhardt Jr. said that he wants to run Berry full-time but they need a sponsor to make that happen. One has to wonder how long that will be considering JRM’s ability to acquire and maintain good partnerships with sponsors. Regardless, I feel like Berry is another one of those young names we will continue to hear about in the near future.

I thought the race was going to be terrible. With Logano and Busch on the front row, I thought for sure one of them would run away with it and the race would be for second. Instead, several NXS regulars were factors in the race and wrestled the lead away from Busch. Logano was less of a factor than Elliott and Scott were and there were several intense and exciting battles for the lead. I don’t know what was different or what changed in this race to make it so different from past Cup Series-saturated NXS races, but I hope to see more of it in the future. I don’t mind Cup Series drivers in the race, as long as there is some competition. Tonight there was and it was definitely enjoyable.

“We always want to come and give our best shot and try to win. [Crew chief] Ernie [Cope] brought a great car, and the pit stops were phenomenal. I’m just super excited to be back in Victory Lane.” – Chase Elliott, race winner

“It just wasn’t the same as what practice was. We had a really good car in practice, we just never ran I guess longer than 10 laps to see if it would really stay with us and not fall off. But, man, we’d fall off in the long runs pretty bad. Just didn’t quite have enough. The Monster Energy Camry wasn’t there on the long runs. We had good speed short run there. We were pressuring the [No.] 9 (Chase Elliott) trying to get by him seeing what we could do there but in the end just those guys were pretty good. He had a better car probably from the second run on. We were just trying to play catch up and there at the end we caught up but we were no better.” – Kyle Busch, finished second

What’s wrong with this picture? An Xfinity driver actually wins an Xfinity race and it is reported like the appearance of the world’s first talking dog. That says all you need to know about why this is a race nobody saw in a series nobody watches.