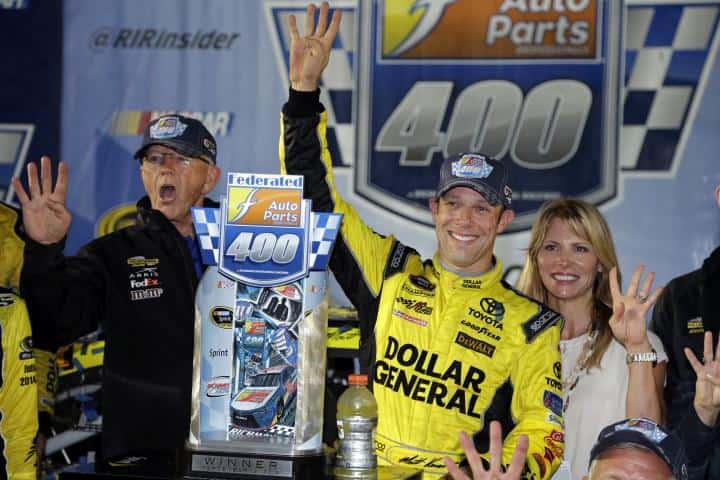 There was simply no catching the No. 20 Toyota of Matt Kenseth Saturday at Richmond International Raceway.

The outside-polesitter grabbed the top spot from Joey Logano on lap 15 and went on to hold the lead for 352 of 400 laps to win the Federated Auto Parts 400 – his fourth win of 2015 and 35th of his Sprint Cup career.

“Man, these guys gave me a great car,” Kenseth said in Victory Lane. “Thanks to Jason [Ratcliff, crew chief] and these guys staying behind me. They had the pit stops we needed, they held serve every time and kept us out front.”

Despite multiple hard-fought attempts by the likes of Logano, Kyle Busch and Denny Hamlin, Kenseth rose to the top each time.

“We were really superb on the long run,” Kenseth said. “[I] had to work for it a little on the short run. I was disappointed to see that last caution. I knew it was going to be tough but we were able to get the jump and get out front.”

The victory for Joe Gibbs Racing – a 1-2 sweep with Busch in second – is the eighth for the team in the last 10 races. At one point in the night, the team held and maintained the top-four positions.

“Our consistency has been really good these last few months and that’s something you have to have in the Chase,” said Hamlin, who finished sixth with a torn ACL suffered early in the week.

The No. 11 driver sat on pit wall following the grueling race with ice bags taped to his injured right knee.

“I wasn’t limited in the car,” he said. “You really don’t notice anything until you stop. As soon as I stopped, it’s just feeling the throbbing and feeling your heart beating in your knee.”

The final caution flew with 24 laps remaining, erasing Kenseth’s gap on Logano and giving Aric Almirola one last shot to get in the Chase. Almirola had to win the race based on Paul Menard’s running position, but Kenseth retook the lead on a controversial restart.

“Well, I knew for sure I wasn’t going to go late,” Kenseth said of the final restart, on which he appeared to jump the restart zone. “That really had nothing to do with Aric, really. I knew it was going to be important to make sure we were clear when we got to turn 1.”

Almirola says he would have put the bumper to Kenseth in turn 1, had the restart gone to plan.

“I got a bad restart, the [No.] 20 got a really good jump and caught me by surprise,” Almirola said who finished fourth, missing the Chase by 17 points. “I hate it that that happened because I was certainly going to put the bumper to him in turn 1.

“I didn’t have anything to lose, I was going for the win. I was willing to do what ever it took. I wasn’t close enough.”

The driver closest to Kenseth in the end was Busch. The 30-year-old made a three-wide move to grab the lead on the lap 218 restart – later falling victim to Kenseth’s dominance and finishing second.

Busch also makes the Chase for the eighth time despite missing the opening 11 races of 2015 due to injuries sustained at Daytona in February.

“Maybe the first month was a little rough,” Busch said of his return. “But after that once we got through Sonoma, it was on. It’s just now to focus and put your head down in the dirt and make sure you get all you can get when you go through these next ten.”

Two drivers making their Chase debuts in 2015 are Menard and Jamie McMurray.

McMurray had to only take the green flag to confirm his Chase berth , and he was able to do so easily, finishing 13th.

“I’m super relieved,” he said afterward. “I’ve been the guy on the outside trying to fight my way in and I’ve also been in this a couple times and been knocked out at Richmond. It’s a much different night.”

One other driver more than relieved is Clint Bowyer. The driver who came into Richmond closest from the cut line battled from a 26th-place qualifying effort to finish 10th, good enough to punch his way into his sixth career Chase.

“Obviously, everybody knows the news and all the stories and all the stuff,” Bowyer said. “But to be able to battle through that – all the people in the organization – just a great deal of thanks to keep your head down, keep digging. And it got ourselves in the Chase.

“A big, monumental thing for an organization to go through what we’re going through and to push through and get into the Chase.”

Rounding out the top 10 in the were Logano in third, Dale Earnhardt Jr. in fifth, followed by Jeff Gordon in seventh in his final Richmond start, Brad Keselowski and Jimmie Johnson.

The most bizarre moment of the night occurred during a late caution when Michael McDowell tail-slapped the rear of the safety truck which was picking up debris into turn 3.

Let the farce, I mean, the chase, begin!

At least there were football games on last night so there was something interesting on.

The last caution was expected but it came earlier than usual. Gotta give the Hendrick cars one last shot at the win.

The reports of the races in the chase should be in the Entertainment section under Movie Reviews.

I noticed that instead of the guys in the booth saying (or yelling) “Chase” over and over the new phrase is “Playoff”. I guess a memo came down from the NASCAR marketing guys.

I have to say I wasn’t shocked at when the debris cautions came out. The booth was saying that the drivers were getting to the end of their run on tires/fuel so sure enough the caution came out soon after. It’s NASCAR and this is just what they do.

I wish Aric Almirola had run his season as good as he ran last night. Was a little bummed, (not shocked though) that NASCAR had no issues with Matt’s restart or Kyle diving into lower lie before the restart.

I am not surprised, Toyota seems to be sending threatening memo’s to Brian. It was stated in the pre-race show that NASCAR told teams, “no funny business”. Of course the teams can’t do it and NASCAR can. How can one explain the Kyle restart bone head move or Matt jumping the restart without a word from NASCAR. Those Toy drivers are some lucky fellas.

Check the Sunday morning “articles/blogs” on Jayski, and try to tell me NASCAR doesn’t control the media……too bad Jerry J has to wait till Monday to spout the company line.

It will be very interesting to read how the NASCAR controlled mainstream media will handle things when the “final-four” going into Homestead are Kenseth, Edwards, and the two Gibbs divas Busch and Hamlin. Come to think of it, I wonder what Rick will say to Brian when that happens.

ha, I like that one, Tim. It didn’t used to be like that. Once upon a time before the COT, before the Chase, I saw some really good races there.

Single file for hundreds of miles interrupted occasionally for manipulative cautions while three idiots play “I can say Chase more times than you” in the booth. I DVR’d it and after the first 150 laps I fast forwarded it ten minutes, watched a lap, then repeated the process. And it was still Boring! Could have been worse though, I could have been there.

Don in Connecticut
Reply to  JohnQ

You watched 140 laps more than I did. First ten, then last ten. Just gets more and more meaningless. Too bad.