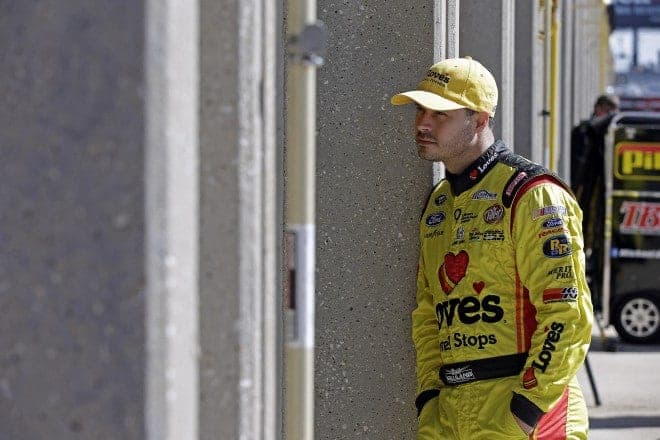 Sprint Cup Series driver David Gilliland will have a special guest beside him on Sunday at the Chicagoland Speedway. Gilliland will be joined by 7-year-old Jack Benjamin, who recently overcame a rare and fatal liver disease.

Benjamin will wear a replica firesuit as he follows Gilliland just before the race on Sunday. The hood of the No. 38 Love’s Travel Stops Ford, as well as the helmet Gilliland will wear inside the car, will also feature a special design by Benjamin.

“This week is the highlight of our year with Love’s Travel Stops, I think,” said Gilliland, a father of two in a team release. “I have so much respect and admiration for what everybody at the Children’s Miracle Network Hospitals do for these kids, and it’s great that Love’s spends a whole month raising money for them. And I really love that we get to host a miracle child and give him such special treatment at the racetrack.”

Benjamin was diagnosed with biliary atresia, a rare liver disease that has no cure. Three months after his surgery, Benjamin had a liver transplant that would change his entire life forever. The young boy is now living a normal life thanks to the transplant. His favorite activities involves dancing, riding his bike and swimming whenever he can.

“With the help of our generous customers, our Love’s store team members have raised more than $13 million for CMN Hospitals across the country,” said Jenny Love Meyer, VP of communications for Love’s. “Our employees are passionate about raising money for their local CMN Hospitals, and it’s great to see David Gilliland also give so much personal support to this mission of helping sick and injured kids.”

The promotion will cap just one of the unique ways Love’s Travel Stops gives back to the Children’s Miracle Network. The organization is non-profit that raises money for 170 hospitals located in numerous locations all around North America. Gilliland will take a tour of Lurie Children’s Hospital on September 17 to meet with patients and get an inside look of the facility.