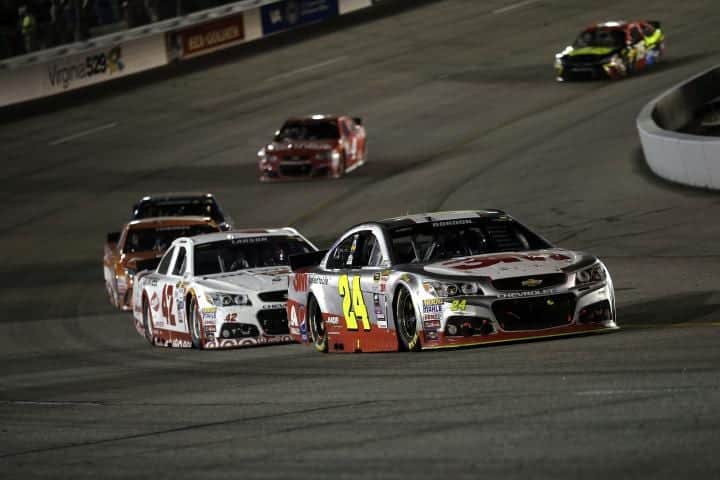 The Chase: Are you in or are you out?

So here we go again. It’s the 12th year of the playoffs. Are you in or out? The reason I ask that so specifically is that the majority of commenters on this column this year – and in years past- state their huge dislike for the format. And as much as NASCAR as tried to inculcate the (various) new formats for the playoffs more widely among the fanbase, the fact remains that many fans find the playoff method of crowning a champion to be at best odious and at worst a travesty. I’ve always had a slightly different perspective since I came into the sport (via work) for the second full year of the playoffs so I’ve never seen a “traditional” season. My only comparison would be soccer, a sport I’ve loved since my Dad sat me in front of a game featuring my beloved Arsenal Football Club at the age of three and simply said: son this is the Arsenal, this is your team. Without boring you too much, the championship is decided based on 38 games (you play each of the other 19 teams in the top division at home and away). I’ve often wondered how a season might look if there was some element of a playoff and I’ve always found it abhorrent. That, I guess, is my way of saying I feel your pain. So with all that being said, are you in or are you out for the Chase?

For the second year in a row, it’s time to fill out your bracket for the playoffs. That sounds downright strange still, to be honest. As you’ll remember last year’s final four consisted of two expected participants in Joey Logano and Kevin Harvick and two less expected drivers in Ryan Newman and Denny Hamlin. So as you fill out your bracket for this year you have a veritable cornucopia of choices as to who might make it all the way. I’m happy to nail my colors to the mast here in this point to ponder so I’m saying Matt Kenseth, Logano, Harvick and Hamlin (more on him below) make it all the way to the final four with the Robot himself taking the big prize at Homestead-Miami, 12 years since his only championship was one of the factors in the switch to the Chase format. We do at least have a year’s worth of data this time round – last year we were essentially blind headed into the four-stage final-10-race format; so it will be interesting to see how history does and doesn’t repeat itself. At this stage, though, given the way the teams have been running it’s hard to see past one of the Joe Gibbs quartet, the Penske pair and Harvick getting it done when it counts in mid-November in Florida. Who do you all think wins the big prize? Let me know below.

When news broke early last week of Hamlin’s ACL tear, there were a bunch of stories about how injury prone the Chesterfield, Va. native has been during his Sprint Cup career. This is the second ACL tear Hamlin has endured, and when you add it to the broken back (a racing incident) and the sliver of metal in his eye at Auto Club Speedway last season, which saw him become a late scratch from the field, it would seem on the surface to be a fair assessment. But when you look at these four injuries – one was from a lack of SAFER barrier (broken back), one was a freak injury (the eye issue) and the pair of ACL tears came as a result of playing basketball. No one is suggesting drivers wrap themselves in cotton wool and avoid any kind of external activities and amongst the phalanx of wheelmen in the Cup garage there are certainly those who engage in pretty significant extra-curricular activities (like Iron Man Landon Cassill). Don’t expect, though, that Hamlin’s form will slip. He’s proven more than once that he is a tough and determined competitor (winning a race 10 days after ACL surgery for example.) He can still win this Chase, make no mistake about it.

No Roush Cars in the Chase:

For the first time ever, no Roush Fenway Racing car makes the Chase. On the balance of form this season this is not a surprise but it is a sure sign that it has been another year to forget for a program that first raced at the highest echelon all the way back in 1988. The stats don’t make pretty reading, with RFR having secured only five wins (four for Carl Edwards, one for Greg Biffle) in the last three seasons (324 attempts). And in 2015, the three RFR wheelmen have picked up a combined three top-fives and six top-10s, with a paltry 11 laps led. Reflecting on the team’s struggles in an Autoweek article in mid August, team owner Jack Roush noted: “We have been Cup racing now for 28 years and had times when we had the hot hand and the combination that everyone else wished they understood or could have… And there have been times when we lacked that. We are on a cycle now that is on its way back up.” Whether they are on the way back up, it’s hard to say, but one thing’s for sure it can’t get much worse than it has been over the past couple years. Still, you would have to say that if anyone can figure it out Jack Roush would be that man.

Next up we head to Chicagoland Speedway, in Joliet, Illinois on Sunday afternoon for race number of the 2015 Chase for the Sprint Cup. This will be Cup race number 15 at the mile-and-a-half tri-oval and the fifth time the venue has been the opener for the playoffs. In 2011 and 2012 the race was won by the driver who would go on to win the whole thing – Tony Stewart and Brad Keselowski respectively – with Kenseth winning in 2013 and Keselowski taking the checkered flag this time last year. The first race in the Challenger round (as it is called) is not the be all and end all especially with this format but the fact also remains that drivers can put themselves in an almighty hole. This time last year, for example, Aric Almirola’s engine failure and subsequent 41st-place finish saw him leave the venue a whopping 52 points down on the first-place driver and some 23 points away from the cut off. Needless to say, Almirola’s Chase ended two races later. With a return to the hard-to-pass package we’ve endured for much of the season I’m not expecting a great race. Hopefully my prognostication will be proved wrong.

The other factors unique to motor sports should be obvious that a “playoff” “Chase” format has nothing to do with the overall in best and worst of a particular team. When you erase 26 races and turn it into ten now you are making that window even smaller to 1 race out of 4 drivers with 39 other drivers on the track. Please tell me how is that logical, fair, or factual? It suits Brian, HIS SPONSORS and the networks which in their sick twisted minds is all about “entertainment”. Which isn’t entertaining at all. I feel for these teams with the money, time and heartache that goes into it and for what….a stat in the history books that say Denise Hamlin and Newman were 2nd and 3rd best the whole year?????????? What a shameful lie of history.

The chase blows. The brackets make it worse. It’s a terrible way to determine a champion when 43 teams with 43 agendas are all on the field at the same time and relying on a mechanical contraption with thousands of moving parts that can break at any time and a real or contrived caution can be thrown at any time and wipe out any lead. In the end luck often matters more than performance.

Luck is a factor in all sports, but the chances of luck being factored out increases with the number of events. There is a higher probability that one bad luck moment won’t determine your chances of winning the championship if there are 36 events as opposed to ten. And with the bracket system you only need one bad luck moment in three events. Of course this is true in other sports’ playoffs as well but there aren’t 41 other teams (besides the two going head to head for the championship) out there to muck up the proceedings, nor are there mechanical parts to rely on.

Brackets belong in basketball, not NASCAR. The whole championship thing for NASCAR has become such a farce. It doesn’t work for me.

I’ll be watching to see how Gordon does, like I have for every race since I started being a fan of his, but as far as being involved in the bracket or Nation nonsense, count me out.

I do not understand how the feeble minded cannot grasp the concept as stated by Bill and Gina, myself and thousands of others that a “playoff” does not work….the biggest factor being the thousands of other variables on the race track with you besides two teams and just bodies giving it there best. No fair, never will be “fair”..and a one race Chump out of 36 races..yeah that’s really fair. Why didn’t any of the neutered people in that meeting with Brian have the nerve to say “that idea sucks”..go have another vodka and tonic? And why didn’t the Emperor make an appearance at Darlington? You can tell he loves the sport that was gifted to him. Sarcasm of course.

Think NASCAR and the racing press are just a bit out of touch with the fans? Psssssst……..the fans are beyond not interested in the Chase, they LOATHE it.

This entire ‘nations’ thing trying to promote one of the worst ideas ever just makes things worse. It is a pathetic attempt to make you believe that suddenly, every fan is behind just one of 16 drivers. Never was, never will be.

If Matt can change his name to Amy, I’ll change mine to Jordan for this chase opinion. I LOVE the chase and have fully embraced the hype ever since pot was prescribed for my medical condition. I love the bright colors and loud fast cars. I smoke my dope then go to the fridge for a snack and when I get back there is always another game 7 moment. How is that possible dude? It’s great. I can never remember what just happened so when an entire race or even the season is reduced to a doublewidegreenwhitecheckered I absolutely love it. I hit the bowl and dream of having a toke with Magic Man BZF. All you hater dudes should just put a good buzz on, mellow out and enjoy the show…seriously. #game7junkie