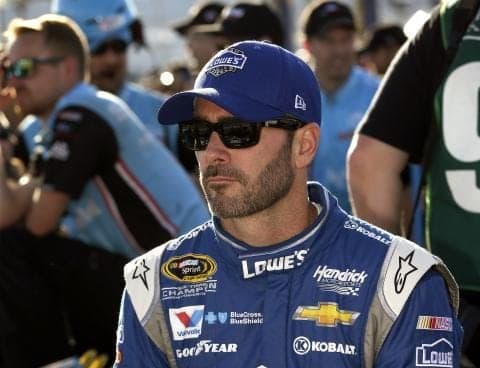 No one was surprised at Monday’s announcement Jimmie Johnson, Chad Knaus and sponsor Lowe’s Home Improvement had signed extensions with Hendrick Motorsports. Perhaps the only surprise was Lowe’s insistence to keep running the full schedule with the team; its biggest rivals in the home improvement industry, Home Depot, have exited the sport altogether and focused their branding elsewhere. With so many Fortune 500 companies focusing on a select number of races the contract here remains unique.

But so is the success of driver, crew chief, and sponsor together, a match that has accomplished more than anyone could have ever dreamed. The trio, winning six Sprint Cup championships together will now remain “married” through at least the conclusion of the 2017 season. By then, Johnson will be 42 years old, Knaus will be 46 and in theory be approaching the tail end of their prime.

The level of consistency achieved by this group is well documented; we haven’t seen anything like it in modern NASCAR history. Johnson remains the only driver to make all 12 Chases in NASCAR’s playoff era; so far, he’s won six of the previous 11. His 11th-place points finish last year is the only time he’s finished outside the top 10 in the standings throughout his career; it was just the second time he’s finished lower than fifth. Johnson has racked up 74 wins, eight seasons of five or more victories and has finished every one of his full-time years in Cup with at least two checkered flags to call his own. Why go anywhere else in free agency with that type of track record?

But perhaps the most impressive part of all is how Johnson, Knaus, and Lowe’s have done it all together as one. The length of this driver/crew chief/sponsor partnership, unbroken is virtually unprecedented in the modern era. Only in the case of Richard Petty, whose sponsorship with STP lasted 20 years, have we seen this type of marriage with one company survive… and thrive. Compare it to other successful teams of this era…

As you can see, even the sport’s best pairings can only remain stable for so long; even the great Inman/Petty connection got separated for a few years in the 1980s. Either financial backers change or mechanical personnel shifts around; the stress and spending of the business necessitate continual evolution. For Johnson, Knaus and Lowe’s to stick with it as long as they have, producing this level of success in an era where sponsors rarely fund all 36 races is a level of cohesion this sport may never see again.

With the pending retirement of Gordon, Johnson and Co. also become the longest-tenured group at HMS. It will also be the longest active partnership in the Cup Series between a driver and team; once again, no one else is even close in an era where free agency allows for people to bounce around.

Jeff Gordon/Hendrick – Since 1993 (ending this season)

These accomplishments put Johnson in rarified air, the exception to the rule no matter how many fans despise his winning ways or “vanilla” public persona. Who would have guessed a decade after the infamous “milk and cookies” meeting Hendrick arranged between Johnson and Knaus to keep the peace we’d wind up here? On the precipice of history? The two could win nine titles between them by the end of the ’17 season, a time where Knaus could potentially go his own way or Johnson could even retire early along the same lines as mentor Gordon. Even now, they’re first ballot Hall of Famers getting a sniff of potentially starting their own wing.

“My relationship with Lowe’s and Hendrick Motorsports means so much,” Johnson said Monday announcing the move. “To me, this just reinforces how committed Lowe’s is to our sport and to our partnership. It says a lot to have one sponsor and one team for this amount of time.”

It also says a lot about the people involved. For Johnson, Knaus and Lowe’s, they sniff the prize that lies ahead for them: a chance to grasp the mantra as one of the greatest racing combinations of all time.

As for the excitement most fans feel about the news that JJ, Knauss and Lowes will be around for at least two more years…. listen closely and you can hear the crickets chirping,,, or look closely an you will see the tumbleweeds rolling by.

Regardless, the 48 team has reached it’s peak. They will win more races, they may get another championship or two, but their best days are behind them.

Tom love all your articles as you really do a great job handling NASCAR. I have to chuckle at Bill B’s response saying the 48’s best days are behind them. You can tell he’s not a 48 fan.

Have to throw a bone your way Tom as you said no one is close to being with one owner as long as JJ has been with Hendrick (2002). Yet there sits Greg Biffle (2003) ONE year shorter. But your point is understood.

Bill B
Reply to  Steve Cos

No Steve, I am not a fan of Johnson. But being a fan of Gordon I realized at the end of the 90’s that his best days were behind him. There was no way he was going to keep that pace up for his entire career, and that is why I can say the same about Johnson. It’s not about liking or disliking a driver, it’s about common sense.

Bill B
Reply to  Steve Cos

Obviously that last sentence should read…
If you said worse then his best days are behind him, if you said better…. how much do you want to bet on that? I will even give you odds.

David Pearson wanted a championship ring for each of his sons. After he got his third title he stopped running for the championship. How many more he could have won doesn’t matter. But Petty might not have 7. But he did win a lot of races and poles after that.