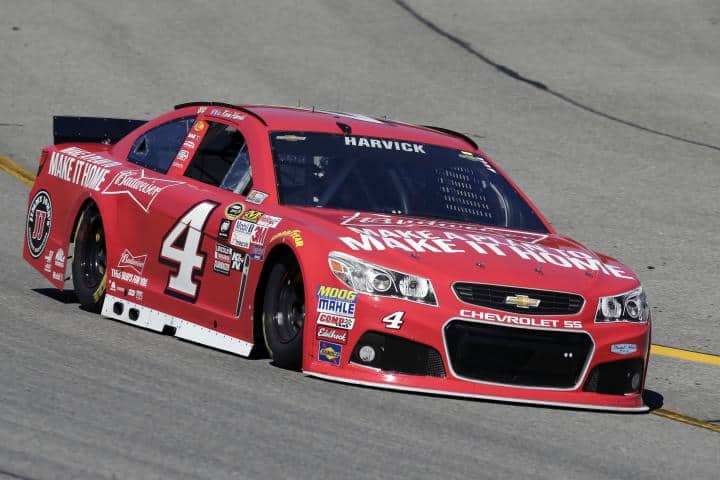 So here we are heading into the first race of the Chase at Chicagoland on Sunday and the good news is that going in, there is may be not one clear cut favorite. If this had been done by the old pre-Chase points system, Kevin Harvick would pretty much have things wrapped up with 10 races to go in the season. It’s just not that way anymore, whether you like it or not, so it will be interesting to see if the Chase format gives us another first-time champion like it did with Harvick last year.

If you do want to think about just who might be the favorite in the Chase picking any of the four Joe Gibbs Racing drivers would not be a bad move. The Gibbs train, and it’s a fast train coming, kept rolling Saturday night when Matt Kenseth dominated the final race in the Chase at Richmond. It was his race all night, and even a late caution to bunch the field back up in the final 20 laps didn’t mean anything to Kenseth, who led 352 of the 400 laps. Well, sure, he might have jumped that last restart a bit, but that kind of thing has been going for decades, and it’s not like he did that to steal a win he didn’t deserve. In all, the Gibbs cars have won eight of the last 11 races, so if they keep a similar kind of pace going that would be remarkable and really what would it be like, as unlikely as it is, if all four cars running for the title at Homestead were the Gibbs cars. With the way they have been going in the second half of the regular season, that thought might not be that much of a stretch.

So, if not the Gibbs cars, then who else just might be a title favorite? Well, the driver to win two of those last three races that the Gibbs cars did not was Joey Logano. The driver of the No. 22 Team Penske Ford has been consistent all season and he would be one of my picks to make that Chase finale in Homestead again. Logano has 20 top-10 finishes this season to go along with his three wins.

And speaking of Harvick, while he isn’t going into the Chase with a ton of momentum, that could all change very quickly at Chicagoland. Harvick did have the most top-10 finishes this season with 22, and he also had the most top-five finishes at 18. The other thing is that Harvick hasn’t won since the third race of the season, so you know, somebody who has been that consistently good for the whole season is bound to run into a win at some point in this Chase. And don’t forget, the defending champion in any sport usually doesn’t go down easily, so expect Harvick to be in the thick of the Chase picture throughout these last 10 races.

We all know that Jimmie Johnson hasn’t been great lately, but we shouldn’t forget that he has four wins this season. And mainly we shouldn’t forget that Johnson and crew chief Chad Knaus have made it no secret that they concentrate more energy on the Chase tracks than other tracks. And don’t forget, that if for some reason Johnson is needing a victory to get the second round of the Chase, the final track in the first round is Dover, where it’s usually a surprise if someone other than Johnson wins there.

Also, let’s give hat tips to Jeff Gordon, Clint Bowyer, Paul Menard, Ryan Newman and Jamie McMurray for making the Chase this year. Sure, they were by no means spectacular with no wins between them, but it’s also a reminder that the current points system does still reward consistency.

While a lot of fans don’t like the Chase (and they have good reasons), it’s probably not going away anytime soon. But one of my issues with the Chase is that some of the tracks in the final, and the most important, 10 races of the season, really don’t belong there. For example, Chicagoland isn’t one of those traditional tracks that sparks excitement when you talk about going to a NASCAR race. Kansas is another place that, while hey, nothing against the good people who live there, it’s not a track that gives a race fan a feeling that this is going to be a great race when you go there or sit down to watch it. Couldn’t there be a way to get Darlington, or Bristol and maybe Watkins Glen somewhere in the Chase? And, the final race being in Homestead, I mean, if there’s a NASCAR championship race in Florida, shouldn’t it be at Daytona? I get that we are messing with tradition here, but tradition took a back seat to the Chase more than a decade ago. So, if tradition isn’t the most important thing, give us the most important races on the best tracks.

And speaking of the Chase, what was supposed to be the highlight race of the regular season Saturday night was pretty much anti-climactic. The only sort of drama was Aric Almirola trying to make a late charge to the front, but the best he could do was third and he ended up fourth. Other than that, we all knew things were pretty much going to end the way they started in terms of who was getting in. The guys who needed to stay out of trouble and play it safe did and be sure to know that drivers who were not in contention for the Chase were sure to be careful when Chase contenders were around them. If they weren’t, it would not be the way to win and influence friends in the Sprint Cup garage.

What has pretty much been a miserable year for the Roush Fenway Racing teams was highlighted at Richmond. Roush’s top finisher at Richmond was Ricky Stenhouse Jr. in 16th, a lap off the lead. He, along with Trevor Bayne and Greg Biffle finished a combined eight laps off the lead. For the year, those three drivers combined for six top-10 finishes. Roush claims his teams will be better next year. Well, they need to be a lot better if they want to be competitive in 2016.

A stunningly disappointing season for Tony Stewart was also on display Saturday night. Stewart qualified respectably in 10th (not eighth as announcer Jeff Burton said several times), but right from the beginning Smoke was going backwards and it didn’t change all night. He finished 29th, four laps off the lead. Nothing particularly bad happened to the No. 14 in this one, the car just wasn’t good at any point in the race. Something that has been all too familiar for the three-time champion.

Why can’t “The Chase” go away soon? Fair warning for the next TV season and I think it would not be a big deal. I do not believe these idiots at the networks realize the demise in ratings or the cause. The $$$$ transaction was made, the contract signed and that is it. Contracts always expire, NASCAR changes it’s rules like the wind, NASCAR does everything to suit them no matter what or when. I fail to see the “it is not going away soon” arguement. Pretty soon those people who work the front lines at the track are not going to hide or make excuses for the empty seats. Will someone with a brain and power to make a change step up and save this once great sport?

I never understood the meaning and appeal of Homestead being the season ending track. Florida politics and the France family no doubt. I could mention Hurricane Andrew but I am sure I am way off base. Anywho, what a sucky track that doesn’t deserve to be in the importance that it is, but hey “The Chase” cheapens everything, so Homestead is fitting. Imo of course.

kb
You are so right. What the heck is the appeal of Homestead closing out the disaster known as the chase? The geniuses that come up with this scheduling mess need a complete head examination. Start the chase at quite possibly the worst track , Chicago then end it at Homestead where nobody wants to watch it. All the empty seats speak for themselves.