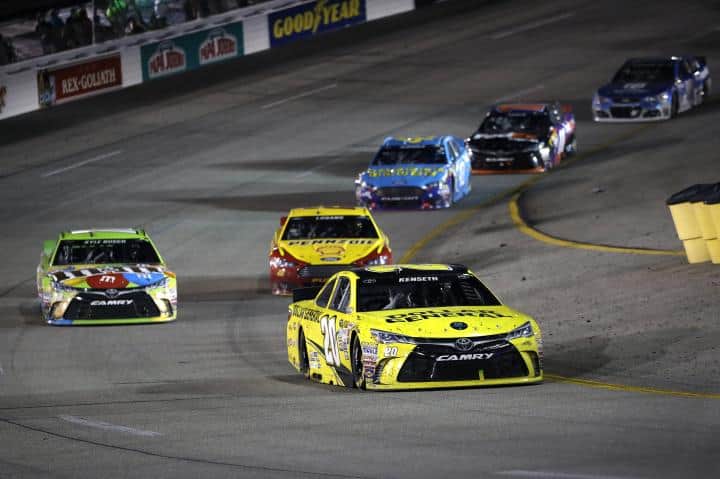 1. A lot of hype with a questionable amount of substance

If you’ve been around for the last 12 years, you know that NASCAR loves its playoffs, and the TV partners love it even more. Thanks to the current system of determining a champion, fans are treated to Chase Watch talk during the race broadcasts starting with the Daytona 500. Before the Chase, the TV booth actually had to spend most races talking about the race at hand. Now if that’s not to their liking, they can always resort to telling everyone who would make the field if the Chase started today… even if reality dictates it’s still 15 races until that’s decided.

For the record, since the FOX contingent spent so much time talking about the Chase during the Daytona 500, had the field actually been set that day, it would include Casey Mears, David Gilliland, Michael Annett, Sam Hornish Jr., Austin Dillon, Greg Biffle, Kasey Kahne, Aric Almirola and David Ragan. It would not have included Matt Kenseth, Jeff Gordon, Kurt Busch, Kyle Busch, Brad Keselowski, Jamie McMurray, Paul Menard, Carl Edwards or Ryan Newman. It’s probably just as well they ran the other 24 races first. But it does illustrate how ridiculous the speculation has become.

But will the racing match up to the hype? It’s unlikely. Unless they are absolutely certain they have a winning car under them, the contenders aren’t going to race very hard unless they’re in the back of the Chase pack and even then they’d rather take a few points less than risk a crash and a lot of points lost. Titles have been lost for lack of risk-taking in the final 10 races (Edwards, I’m looking at you) and that was before eliminations came into play. There have been a few post-race incidents, but really, does a fight in the garage replace excitement on the track? Yeah, I don’t think so either.

2. Not much about the other 27 drivers in the race

Wait, there are other drivers in the race? Oh yeah, those other guys are still out there, aren’t they. And here’s a news flash: they’re actually still racing for something, whether that’s a stolen win, a few points to prove they’re a step ahead of a rival or some strong finishes to salvage a season that to many, is already a lost cause.

If a Chase driver is involved in a crash, he’ll have 17 microphones in his face the moment he steps out of the infield care center. One of those other guys? You’ll be lucky to find out whether he’s okay, let alone have actual airtime dedicated to an interview, not that you do now for a lot of the field, but it’s about to get 10 times worse.

And while yes, the Chase drivers do deserve attention, the rest of the field should not be completely ignored as they often are this time of year. They still have sponsors to convince to stick around, despite a complete exposure blackout for two and a half months of the season. They still race hard for every position they get. Well, mostly, because….

3. Nobody wants to be that guy.

Don’t be surprised to hear NASCAR remind the rest of the field during drivers’ meetings from now until the end of the year to basically stay out of the way of the Chasers. And while it would be a shame to see a driver taken out of championship contention by a backmarker driver, it’s also a shame that that backmarker driver has the added pressure of racing for his own position and avoiding disaster with a Chase driver.

Conspiracy theories abound in NASCAR. The idea of the sanctioning body favoring one team or another has been around for decades and its roots are probably not completely unfounded. Don’t bite the hand that feeds you and all that. One such theory reared its head at Richmond last week when two different Joe Gibbs Racing drivers appeared to jump two different restarts without penalty on Saturday night. Has JGR gotten off lightly on a few penalties in recent years? Sure. So have others. A few years ago, the prime target was Hendrick Motorsports.

Before that it was Richard Childress Racing. Roush Fenway Racing has been bandied about as well. Nobody is immune. Does NASCAR fix races inasmuch as choosing who will win? No, absolutely not. Too much would have to go into actually fixing a race, but do they sometimes let things slide or create them to create a little excitement? Probably… and it will be heavily scrutinized in the Chase.

The other side of the coin is the idea of team orders. Would a driver go so far as to intentionally wreck a competitor to help a teammate? It’s happened before (just look at the 2003 Camping World Truck Series finale), so it’s not out of the question. NASCAR has indicated that it expects contact in the Chase, so it could be a very fine line.

What’s more likely, though, is a driver not in the Chase letting a teammate pass him late in a race for position. That’s happened before for sure. I’ve heard a team go so far as flat tell a driver on the radio a few years back to let a Chase-qualified teammate go by in the closing laps for a spot. That driver was not very happy about the orders, and I don’t blame him. It’s definitely a possibility for teams like HMS or RCR, which have team cars not in the Chase. Will it be rampant every race? No, and it won’t be blatant, either. But it’s understandable why fans would be suspicious of hanky panky.

5. A champion that many don’t see as legit

And at the end of the day, it’s easy to see why. The current Chase system all but throws away points earned during the first 26 races. One bad race can spell disaster even with two good ones in a segment. Meanwhile, three OK races, with the driver taking it easy and not taking risks to win, can easily mean moving on. And the one race for the title… well, that can erase a whole season of excellence in one slip of the wheel. Even the original Chase system makes the title seem cheaper than its full-season counterparts. If Jimmie Johnson wins a seventh title, it’s hard to put him on the same plane as Richard Petty and Dale Earnhardt, and that’s a shame.

Johnson – and the other Chase-era champions – deserve better than what amounts to an asterisk beside the last dozen years’ worth of championships. But it’s equally difficult to argue that the asterisk doesn’t belong there, even if NASCAR doesn’t put one on the record books. Yes they won under the same rules as the rest of the field, but they didn’t win under the same rules as the other champions, either. And today’s one-race champion just devalues the whole thing even more. Better to be lucky and all that…

19 thoughts on “The Frontstretch 5: Things Fans Can Expect To See During the Chase”