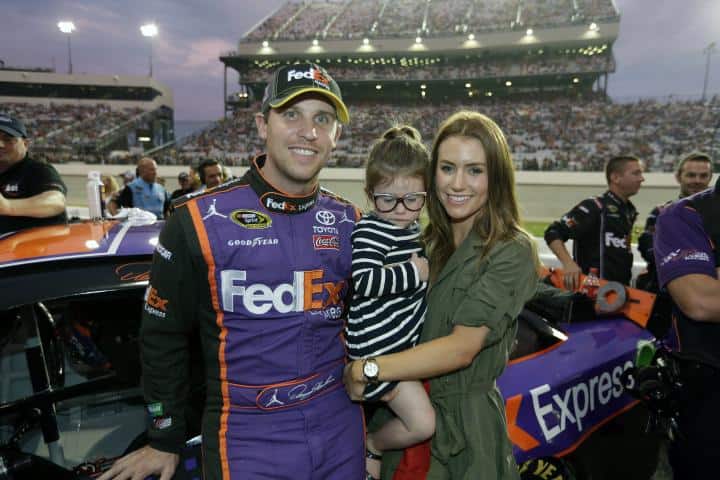 That collective gasp you just heard was the sigh of relief from Jeff Gordon fans. The No. 24 team will make the Chase and contend for a fifth NASCAR Sprint Cup championship this year, for the final time in the driver’s 24-year career.

We also saw drivers Jamie McMurray, Ryan Newman, Clint Bowyer and Paul Menard make it into the Chase Grid all on points. And for a team like the No. 15 of Bowyer, making it into NASCAR’s postseason is a huge moral victory (if there is such a thing) for Michael Waltrip Racing, the two-team Sprint Cup organization that will be shuttered and sold off at the conclusion of the ’15 season.

Bowyer’s future in Cup racing is still left to be determined, and the 36-year-old Kansas-native’s name has been tied to multiple rumors swirling around the Sprint Cup Series. One such rumor has included Bowyer running for a smaller team like HScott Motorsports in ’16 and then taking over the reins of Tony Stewart‘s No. 14 Chevy at Stewart-Haas Racing in 2017, provided that the three-time Cup Champ decided to hang it up and retire.

Yet another rumor has been that Bowyer would end up with Richard Petty Motorsports, taking the seat of the No. 9 car, provided that RPM chooses not to renew Sam Hornish Jr.‘s contract. Whatever ends up happening with Bowyer after this season, there’s no doubt that the speculation and rumors will only continue to heat-up if he can mount a serious run inside the Chase. Could you imagine what the storyline would be if he were to win the championship? Crazier things have happened, folks. Now I’m not saying it will happen, but hey the points all are resetting to zero starting on Sunday at 3 p.m. at Chicagoland Speedway.

Now onto this week’s questions sent in from you, our readers…

Q: With Denny Hamlin sustaining his ACL tear in his knee, how will it affect his Chase and like that of other pro sports athletes (NFL, MLB, etc.) many have stipulations in their contracts for non-pro sports injuries. Meaning those injuries which may occur from participating in sports outside of their profession, and if they get injured their contracts are also affected. Does Denny, and do other NASCAR drivers have similar stipulations in their contracts? I can’t imagine Joe Gibbs was very happy to learn that his driver got a serious injury due to playing in a pick-up game of hoops! Thanks. – Holden J., Dearborn, Mi.

A: Hi Holden, thanks for the question this week. As you probably already know, the contracts and especially stipulations, like you brought up, might as well be kept under lock-and-key in the NASCAR world. Drivers and owners hardly ever make them public, and they’re never discussed or disclosed to the public, outside of the amount of years. For example, Jimmie Johnson‘s recently re-signed agreement with Hendrick Motorsports for another two years through 2017. That’s about the most anyone – even those in the media – ever really get, and even then, many teams won’t even disclose the length of a contract.

However, what you bring up about other major stick-and-ball sports having clauses in their professional contracts for injuries outside of the sport, is an interesting one. Recently, New York Giants (NFL) star Jason Pierre-Paul blew part of his finger off during a fireworks explosion over the summer. The rumor is that the injury will – and has – impacted his contract with the Giants due to it impacting his job performance. Without knowing the specifics of Hamlin’s contract with Joe Gibbs Racing, I’d have to imagine there is a clause somewhere in there that does allow for the drivers to do athletic things outside of racing. Basketball would probably fall into that category, so I doubt this injury is impacting Hamlin from a contract stance.

Where he might run into some issue is in the driver’s seat. It was reported last weekend at Richmond that Hamlin has tried racing with some added foam inserted between his knees, but after trying it, Hamlin decided to remove the extra padding. Although it didn’t seem to affect his driving at Richmond, I do think that once we’re deeper into the Chase it may start to.

Q: Hey Greg, Back last year when the Chase for the Sprint Cup first started, NASCAR had sent out drivers all over not just the U.S., but North America, into both Canada and Mexico City, to visit with media and make appearances. This year they’re just in the U.S. Do you think NASCAR has seen a lack of interest from north and south of the border on this? – John O., Summerville, S.C.

A: John thanks for the email this week. The media tour promoting the Chase for the Sprint Cup was interesting. Sending all 16 Chase qualifiers across the nation is still an enormous task to coordinate all the driver interviews and get coverage in each of the core markets that the Series will visit (plus NYC and LA) across the Chase.

I think you hit the nail exactly on the head with the lack of interest north and south of the border. It’s really hard, more for Mexico than Canada, for NASCAR to send a driver down there and actually gain meaningful media coverage and promote excitement for the NASCAR Sprint Cup postseason. Besides the language barrier, there are issues like hitting media that will carry that message, and targeting Mexican fans who care about NASCAR racing back in the states. No small task.

Combine that with the fact that the next driver in line might be visiting a place like New Hampshire or Chicago, and I don’t really think NASCAR felt it was still worth the time and effort in sending a driver outside of the U.S. for a few media stops just one week before the beginning of the most important part of the season.

Another reason that ship may have sailed is that NASCAR’s popularity, at least in the NASCAR Mexico Series, has been lacking in the past few years. Most recently, the series lost its title sponsor (Toyota), and there are rumors that the Mexican stock car series is getting bumped out in popularity by the rival V8 Super Copa Telcar racing series. Add that all up and things aren’t looking all that good down south for NASCAR racing, and that had to figure into why the sanctioning body chose to pursue media opportunities elsewhere back here in the U.S.

Now I’m not saying it will happen, but hey the points all are resetting to zero starting on Sunday at 3 p.m. at Chicagoland Speedway.

Don’t the drivers who won a race during the “regular season” get 3 points per win for the first portion of the Chase?

DoninAjax
Reply to  Robert B.

Who knows. It depends on what Brian thinks the rule should be when he gets up in the morning. If he wants to change it , he will. Because he can! For the good of NA$CAR and his wallet.

I agree Sue. There is nothing relatable between auto racing and the MLB, NFL, and NHL. All those sports play against one other competitor at a time; not the entire rest of the league. By its very nature auto racing does not lend itself to the same championship format as other sports. I’m tired of it being slammed down our throats but I fear like most things even if it doesn’t make sense if someone says it long enough and loud enough that everyone will start buying into it.

Bingo! NASCAR is completely fan deaf . The fan base continues to flee NASCAR like fleas on a swimming hound. I wonder, could there be some correlation?

I really don’t understand sending drivers all over the country and promoting this ridiculous ‘(insert driver name here) Nation” gimmick. Does Nascar really think that fans will suddenly change who their favorite driver is to root for just because they pretend there are only 16 drivers in the final 10 races? How stupid can they…oh. never mind.

I think you underestimated the Canadian interest in NASCAR above.