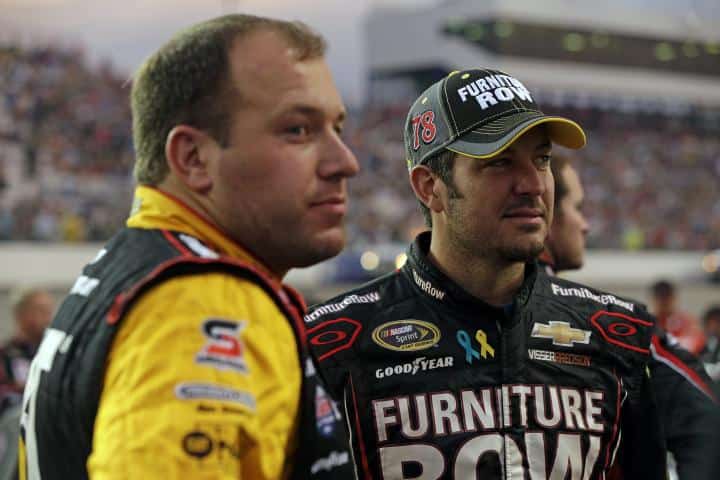 As NASCAR sits on the brink of the Chase, it’s easy to pick out the favorites. They’re the ones at or near the top of the standings before the reset, the ones who have been consistently excellent all season long. When it comes right down to it, they’re the ones who probably deserve to win a title. But they have to go through the rest of the competition first, and that where the waters start to swirl with uncertainty.

Why? It’s not like the back of the Chase field has won multiple races (five entries this season have not won at all in 2015) or even avoided the bad luck that their competition has. So why should they, of all people, be any kind of a threat now.

In a twist of irony, it’s because they made the Chase not by winning races and taking the risks to do so, but by having quietly decent finishes. And this Chase, for all the talk of winning being everything, still rewards consistency, at least to a point. While consistency like Kevin Harvick has shown will trump, say, Paul Menard’s steady season, the Chase format is so unforgiving that one bad race usually spells disaster.

Look at it this way. If a driver crashes at Chicago and finishes 42nd, rebounds and finishes third at Loudon and then fifth at Dover, he’d earn 82 points. Say he leads laps at both Loudon and Dover, the most laps at one of those, and he’s up to 85 points. Meanwhile, despite his two stellar races, that leaves him two points behind a driver who finished 15th every week and didn’t lead a single lap. When elimination day rolls around, two points can mean the difference between moving on and… well, better luck next year.

Well, yes. That’s been proven. But among this year’s winless drivers, does anyone have the chops? That’s a tough call. If an average finish of 15th is what it would take for a driver to squeak through (and that’s just a number based on the above scenario, not a hard number), Newman is again in decent shape with a 13.8 average. Jamie McMurray just makes that 15.0. Jeff Gordon comes close with a 16.0, while Menard and Clint Bowyer, each with a 16.7 average, are getting further away from top-tier consistency.

McMurray and Gordon also have a history of coming through in the sport’s biggest races. That kind of clutch performance could come in handy this fall, if either driver can find a little magic in the stretch run. Bowyer is another driver who could come through with a win and the automatic advancement that comes along with it.

Newman and Menard are, in general, more likely to rely on consistency to advance. One advantage the pair enjoys is their ultra-durable Richard Childress Racing equipment. RCR in general (along with its satellite teams for the most part) makes equipment, and particularly engines, that rarely fails. attrition due to mechanical failure is rarer than it used to be, but it’s likely that at least one Chaser will face bitter disappointment due to something breaking. Not that Newman, Menard or Martin Truex Jr., who also runs RCR equipment, are completely immune, but the odds are in favor of it being someone else.

Another thing that can be an advantage for a Chase participant is teammates both inside and out of the Chase to pull information from. In that area, it’s Gordon with a bit of an edge, as he can draw from both Jimmie Johnson and Dale Earnhardt Jr. within the Chase field, as well as Kasey Kahne, who’s outside and with a new package coming for 2016, has nothing to lose by helping his Handpick Motorsports teammates try some things.

The other four non-winners also have teammates on track (Newman and Menard are teammates) but perhaps not as successful ones as Gordon. While hopefully that doesn’t mean anything as unsportsmanlike as using one to eliminate a competitor during a race, it can mean running interference, relaying information, scuffing tires, or a drafting partner. Of the 16 Chase drivers, only Truex drives for a single-car team, but they have full information sharing with RCR, Germain Racing and JTG Daugherty Racing, so it’s not like they’re on an island.

Can one of the winless drivers come through and win a title under the current Chase format? Absolutely. Is it likely? Much less so, because they’re winless for a reason. However, it’s not out of the realm of imagination that one could. Many fans have expressed disgust with that concept; others have embraced it as the ultimate jab at NASCAR’s format. With more than a quarter of the Chase drivers not having a win this year, odds are good that at least one of them can make the final four at Homestead. Each of them has advantages and disadvantages to his credit.

Who can buck the odds? Keep an eye on these five drivers; they have nothing to lose, everything to gain, and that in itself could be a catalyst for a title run.

Ah, that undefined general word “consistency” to make a case for the drivers who don’t belong in this absurd format. Really? Ryan Newman 41 total laps led last year a whopping 5 top 5’s 16 top 10’s and zero pole zero wins. What sayeth the pushers of this insane justification for drivers that got eliminated with more wins, top 5’s, top 10’s and a pole or two to their credit? Patently absurd.

It’s a shame that this is even being discussed because it shows just what a crapshoot the championship has become. Giving 16 drivers a chance at the championship when the stats of anyone outside the top 5 in points just aren’t championship worthy is a joke. Glad this is my last year of caring.

Not if Brian can do anything about it. And he can.