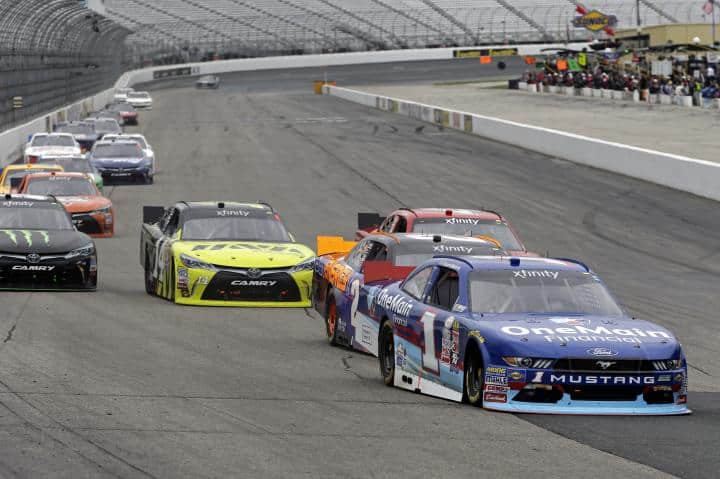 See ya later, Chase. Come February at Daytona, the metallic blue No. 9 NAPA Chevrolet will no longer be racing on Saturday afternoons. Instead, it is getting a promotion.

It is not like JR Motorsports really has a choice. If it were up to the team, it would want to keep reigning Xfinity Series champion Chase Elliott in the No. 9 car for another season. But replacing Jeff Gordon in the No. 24 car is a once-in-a-lifetime opportunity.

Over the years, JRM has employed a plethora of drivers that have gone on to success. The most notable one from its stable is 2012 NASCAR Sprint Cup Series champion Brad Keselowski, who drove for the team from 2007-2009. Other top drivers such as Aric Almirola, Danica Patrick and more also received big breaks with the organization.

However, now a three-car juggernaut, JRM is looking to secure its future with Elliott departing for the Cup Series next year. Rumors have surfaced that veteran Elliott Sadler will join the team next year, providing funding from longtime sponsor OneMain Financial. While the team and Sadler have neither confirmed or denied any discussions, the pair seems realistic, and if all goes well could have a deal signed before the season concludes.

“I saw the reports come out just like you did and the report was about 50/50 – 50% true and 50% not true,” Sadler said at Bristol Motor Speedway in August. “The true part was I had not signed and have not signed with anybody, so that part of the report was definitely true. The rest of it, I have no idea about. I don’t have anything to announce here today. We’re still working through some things for next year.”

The veteran raced with JRM for four events in 2010, preparing for his transition back into the sport’s second-tier division. Securing a deal with him would mean another title contender in the team’s stable. But that still leaves two, or even three seats left with the team.

Regan Smith, driver of the No. 7 car, has been with the team since the season finale in 2012. Co-owner Dale Earnhardt Jr. has stated that he would like to re-sign the veteran, but nothing is official as of yet. As he does every year, Smith is evaluating his options on the Cup side, although there are few seats open and sponsorship is a must if he were to go back to the premier division in the sport. In his time with the team, Smith has five wins, 23 top fives and 63 top 10s, each of which are ranked as the most in the NXS during that span.

With sponsors TaxSlayer.com, Breyers, Great Clips, etc., which are seemingly pleased with Smith’s performance over the past few seasons, his future is secure at JR Motorsports. He has 18 top 10s this year and is one of four series regulars to earn a victory this year.

Meanwhile, the focus is on the youth movement within the organization. With Elliott’s departure, Earnhardt is searching for the next young gun that could win the championship. After a failed experiment with dirt racer Brad Sweet, who completed just 90% of the laps he was supposed to run in 2013, he has stuck to moving up drivers with experience in stock cars.

Ben Rhodes, reigning K&N Pro Series East champion, signed with JRM during the offseason. Running 10 events this season in lieu of driving a full schedule with a lesser team, the 18-year-old has two top 10s in his first seven starts. But not racing on a weekly basis has hurt his adjustment period to the larger, faster cars. His average finish is 21st thus far, and he finished outside of the top 20 three times due to on-track incidents (and once due to an engine issue).

Then there is the curious case of Josh Berry. Until an impressive run at Richmond, not many thought about him as a potential star driver. He outran Kyle Busch at one point during the NXS race at the track and finished seventh on the evening. Suddenly, all eyes were on a career late-model driver. As Earnhardt stated, if sponsorship arises, Berry could have a ride with the team for more events.

There it is again. That evil if.

The team also has a budding star in Cole Custer, who races in the Camping World Truck Series for the organization with the support of Gene Haas. Come Daytona next February, he will be 18, the age one needs to be to race in the NXS or full-time in the Truck Series. Racing at the short tracks and the lone road-course race in the Truck Series that he is allowed to run, he has excelled in the No. 00 truck since he debut last year.

Custer won at Gateway with JRM and has three top 10s in seven starts. Having the dominant truck at Dover, Bristol and in Canada, he had several opportunities to capitalize, but failed to do so. However, he showed that he has the ability to run up front, and has truly impressed this year.

With Haas’s support, it is likely that he will make somewhat of a splash in the NXS next year. His steady climb through the rankings is similar to that of Rhodes, and the two would likely be stellar working with the veteran duo of Sadler and Smith – if that is the scenario.

Wait, so that leaves five drivers with the possibility of three full-time cars and then another full-time vehicle to split between some Cup drivers. How is that going to work?

Well, a solid option for the organization would be to have a car dedicated to putting Berry, Custer and Rhodes for one-third of the season per driver. This would enable all three to get comfortable with the competition, try their hands at different tracks and gain experience to impress sponsors. It would take a lot of pieces to make this happen, but it is a solid possibility if each of the drivers can get sponsorship dollars.

If not, there is the B-option, as I like to call it. The team can run Custer and Rhodes in a third car, splitting the season between the two. Berry could run the car that is usually split between Cup drivers in a handful of events if he gathers the sponsorship to do so, hoping he can gather funding for 2017.

Whichever route JRM opts to go with, the organization will have a solid stable for 2016 and beyond. Its alliance with Hendrick Motorsports has proven to create a championship caliber team, and the possible expansion to four cars would turn the organization into one that could be unstoppable on a weekly basis.

The better question is, What is the future of the Xfinity series?

JohnQ
The future of the series is just like the present, as I know you are well aware. Lots of cup guys enhancing their hindenberg sized egos in this playground farce. Lots of ridiculous talk about “owner points” as if anyone gives a rat’s ass, but since the cup guys insist on being in the series, the “journalists like to remind us of the ever exciting owner points “battle”. Companion races will take up about 90% of the series on tracks that are atrocious. What else am I missing? Oh yea the empty seats, because nobody wants to watch this cup practice session.

John, while that is a great question don’t expect the racing media/journalists to answer it or even mention the elephant on the track. While articles like this one have merit I would rather read a good investigative article on the health, issues and future of the Xfinity series as a whole.

I assume Chase will run a bunch of Xfinity series races next year in the 88.

I stopped reading when Danica Patrick was listed as a “top driver.” Almirola, too, may be nothing remarkable, but neither is his team.