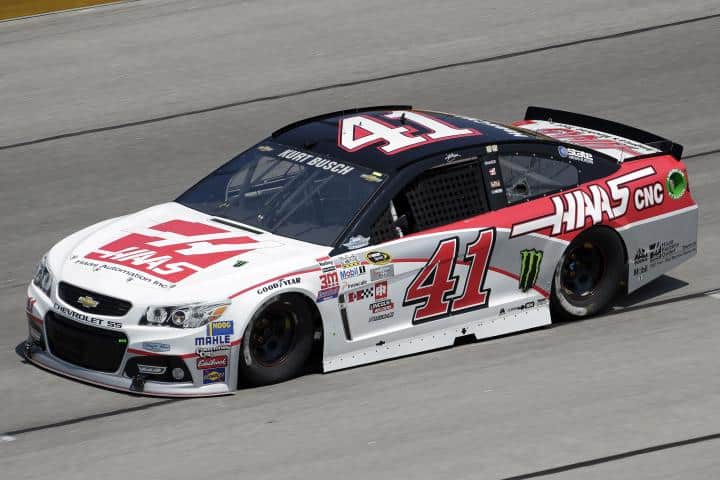 NASCAR driver Kurt Busch, pilot of the No. 41 Haas Automation Chevrolet for Stewart-Haas Racing, made a pit stop in Phoenix Wednesday to help kick off the Chase for NASCAR’s Sprint Cup. The 2004 Cup titlist held a Q&A session with fans at the second annual “Breakfast With Champions,” part of NASCAR’s “Chase Across North America” held in cities around the country this week.

The event was hosted by Phoenix International Raceway and much of the discussion focused on November’s Quicken Loans Race For Heroes 500K at PIR. As the final Eliminator race in the Chase, fans will see the field of eight remaining championship contenders cut in half at Phoenix; only four will still be in title contention once the checkered flag waves.

After the Q&A session, Busch spoke one-on-one with Frontstretch. He enters the Chase six points behind the leaders on the strength of two victories this season: Richmond and Michigan.

Becca Gladden, Frontstretch: It’s been a few years since the repaving and reconfiguration of Phoenix International Raceway. Are drivers comfortable with the changes now or is there still a bit of a learning curve?

Kurt Busch: It’s comfortable now, but each year that we come back we hope the tires get a little bit more grip. What’s tough at PIR is that the fresh asphalt with the warmer temperatures creates really high tire temps. We have to be conservative with the tire to not blow it out. I’m actually part of the Goodyear Tire test in October and hopefully that will find a better tire that has more grip and has durability as well.

Gladden: You’ve talked about Talladega being a wild card in the Chase. How much do you think our race here at PIR could be seen as a wild card race?

Busch: The wild card side of it comes from the unpredictability of the race.The draft and the big pack racing that you see at Talladega are what creates the unknown. Phoenix is more of a traditional style short-track race and you’re more in control of your destiny at a track like that.

Gladden: Stewart-Haas Racing has two drivers (Busch and Kevin Harvick) in the Chase and two drivers (Tony Stewart and Danica Patrick) not in the Chase. Is there any advantage to having teammates who aren’t in it and what does the organization need to do as a whole to improve?

Busch: We want four cars in the Chase competing for the championship. But if there are two that are in, they run for the championship and they run with what this year’s package is. The other two need to work towards 2016, and the future development of parts and pieces and equipment for the way that we’ll start off next year.

Gladden: How strange is it not having Tony Stewart in the Chase?

Busch: It is different. He’s a true competitor, a three-time champion, and when he’s in the Chase you know it and you have to be afraid of him. He’s a tough guy and I’m glad he’s on my team out on the track. With him not in the Chase, we need to make sure that he’s getting all that he can out of the car and to help the team develop.

Gladden: I saw the pictures of the trip you and Ashley took to Santorini, Greece, during the off week. Tell me about your trip there.

Busch: I loved it – Greece and all of the Greek Isles, going into Athens first, taking a tour and getting some of the history of Greece – and the way that the whole trip felt. It was like a dream, being freshly engaged. The restaurants – I loved the food!  The Greek people are very passionate about their food and their service. Santorini is way more picturesque in person than what I saw in different advertisements and things that you can research. The hills and the cliff sides are amazing with the white houses on top – they look like snow-capped hills from a distance.

Gladden: You’re also a first-time uncle. How are you enjoying that role?

Busch: It’s nice with Brexton to see his development and his growth. Each time I go to see him, it’s like a whole new kid.  He’s smiling and interactive, and the next step will be him putting around, crawling and walking and trying to keep track of him. I’m sure the next step after that will be in a little Big Wheel or a tricycle. It’s really neat to see that part of our lives moving forward. I see him about once a month right now. I know he’s got a laundry list of fans and people and family and friends wanting to see him, so I get to see him at the track, usually on Saturdays.

Gladden: You seem very happy. Your smile seems very genuine. Are you in a good place right now and how does that affect your performance on the track?

Busch: I am very happy, both personally and professionally. A lot of it comes with the speed in the racecar, and that’s Tony Gibson. When you have a veteran crew chief who communicates very well, has a good game plan, and is building the best cars possible, I know I’m going to the racetrack with some of the best stuff in the garage area. That’s the big smile that’s on my face, as well as being engaged to Ashley. It’s wonderful.