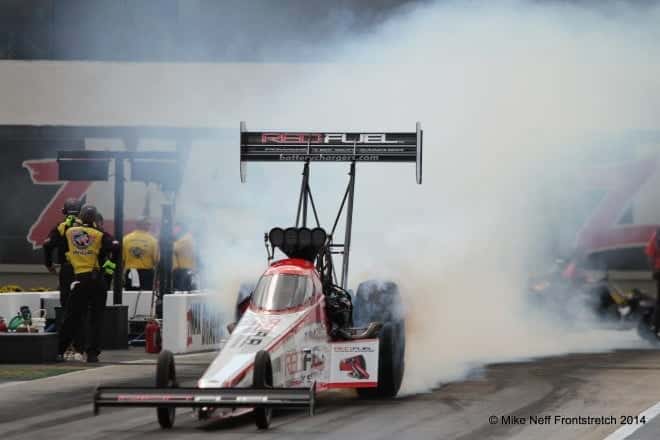 A few weeks ago, Don Schumacher Racing parted ways with driver Spencer Massey. Massey had run in the top 10 in Top Fuel points all season, but his departure meant that his team would not be able to reap the reward and contend for a title in the Countdown for the Championship.

Yesterday, Alan Johnson Racing announced the suspension of operations effective immediately due to a lack of sponsorship funding. The team lost its support just prior to the start of the season and has been unable to find a replacement sponsor. Driver Shawn Langdon was set to start his quest for the title as the sixth seed in the Countdown.

Wednesday, DSR and AJR jointly announced that Langdon will drive DSR’s Red Fuel Powered by Schumacher/Sandvik Coromant Top Fuel dragster starting this weekend at Charlotte and throughout the six-race Countdown in pursuit of the championship. Langdon is still under contract to AJR and will return to that team once the season ends, so essentially he is on loan to DSR.

“To start the season with Alan Johnson Racing and finish it at Don Schumacher Racing is definitely a unique situation,” Langdon said. “For the next six races, I’ll be driving for Don Schumacher Racing and competing for a championship. It’s great for the fans to be able to have 10 cars competing for the Mello Yello championship, it’s good for NHRA, and at this point, I think it’s good for everybody.”

Necessity certainly makes for strange bedfellows. These guys are usually locked in fierce competition. Langdon’s point is spot on though. It’s good for him to be able to see the season through and compete for the championship. It’s good for the rest of the Red Fuel Powered by Schumacher/Sandvik Coromant dragster team to get that chance too. It’s good for the NHRA (one would wonder if they were involved somewhere along the line here) to avoid the smirch on the championship battle of having one driver sit it out. Finally, it is good for the fans to get to see all 10 drivers compete.

“Our NHRA fans certainly should see the 10 best drivers battle it out in the Countdown and we are excited that Shawn and our Red Fuel/Sandvik team will be in the fight,” said Schumacher.

“It’s unfortunate that Alan Johnson Racing cannot compete for the Mello Yello championship this year,” team owner Alan Johnson said. “Our arrangement with DSR is the best for NHRA drag racing, the best for the fans, the best for Shawn, and it helps out a fellow competitor – it really should work out well for everyone involved. Sometimes, it’s good to put ‘what’s best for the sport’ ahead of everything else. I think this circumstance is one of those times.”

Some things most people don’t know about Leah: Like so many of her fellow drivers, Leah is a graduate of the NHRA Summit Racing Jr. Drag Racing League. She began racing at the age of eight and has raced every season since on at least a limited schedule. She also won the 2010 NHRA Hot Rod Heritage Racing Series in a Funny Car in addition to her time in Pro Mod and currently in Top Fuel.

Today’s profile driver Pritchett tells us about the craziest thing that’s ever happened to her at the racetrack. Leah had quite a scary ride but thankfully it all turned out all right.

The number of drivers in each Mello Yello Series professional category that still have a chance to win the 2015 championship. The 10 drivers are now locked in and start out with only 110 points between first and last when they hit the track this weekend in Charlotte.

In case you somehow missed it, this weekend in Charlotte kicks off the six-race Countdown to the Championship, so make sure you tune in on Sunday night.