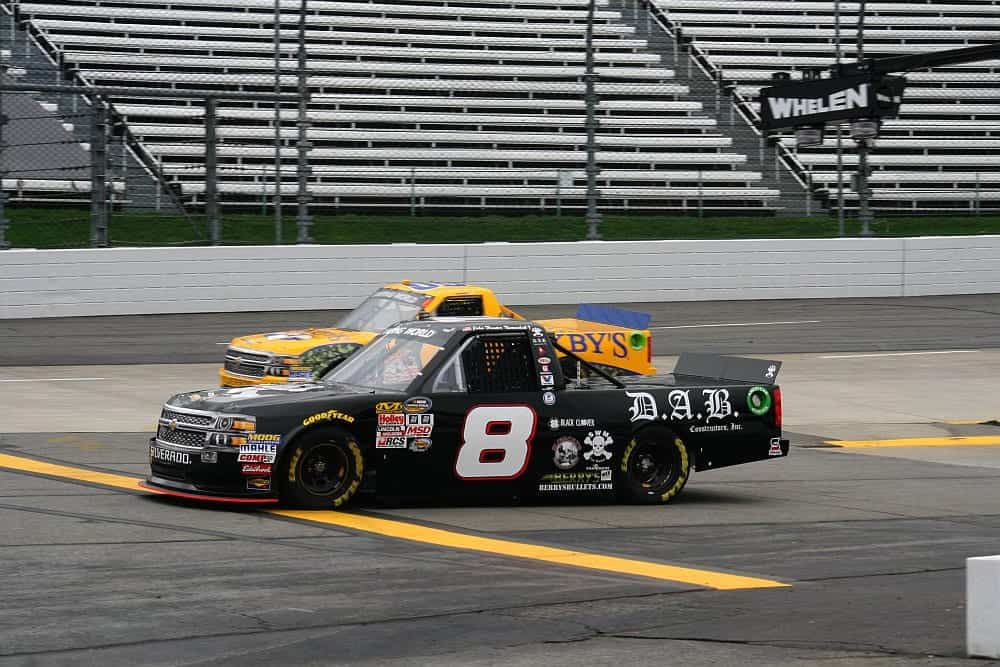 On Saturday morning, the Camping World Truck Series took to Chicagoland Speedway to make up the American Ethanol E15 225, a race originally scheduled for Friday night, but was postponed due to heavy rains. JR Motorsports’ Kyle Larson and ThorSport Racing’s Johnny Sauter had the two best trucks all weekend, but the E15 in the race’s title prevented them from hitting paydirt.

Larson topped off the fuel cell in his Haas Automation Chevrolet during the final caution of the race, giving up the lead in the process. Timothy Peters, who was making his 200th career start, took the lead from Spencer Gallagher on the restart and pulled away. Despite having to save fuel, Larson slowly made his way back up through the pack to the top three.

Peters was forced to pit for fuel and two tires with 14 laps to go, giving the lead back to Larson with Daniel Suarez close in tow. Suarez, who already knew that he could not make it on fuel, raced Larson hard for the lead and took it for three laps before stopping for a splash-n-go.

With the rest of the leaders dropping by the wayside, Larson ended up with a three-second lead over John Hunter Nemechek, who had spent much of the race in the top 10, but was not in contention to lead. Larson tried to back it down in an attempt to make it to the finish. However, his truck quit on the backstretch with a lap and a half to go. Nemechek was able to drive past and all but coast to his first career Camping World Truck Series victory.

Nemechek was very happy with the win, and grateful to crew chief Gere Kinnon for his strategy.

“It’s definitely an amazing feeling,” Nemechek said in his post-race press conference. “We had to fix the left-side window [during the last caution]. I didn’t want to go to the back since track position was key, but we got to top off with one to go.  [Kinnon] told me to save fuel that last run. I ran out coming out of turn 4, so it was a great strategy.”

Joe Nemechek, John Hunter’s father/co-truck owner, was overjoyed with the win given the team’s circumstances.

“He beat me to something I haven’t accomplished yet,” Joe Nemechek said. “He’s won his first truck race and I haven’t been able to win a truck race yet. It means a lot to me because he’s such a talented driver. From what we’ve had to work with in our late model program and our truck program, he’s accomplished a lot. I’m so proud of him because we have such a small group of guys on a very, very limited budget and we were able to pull off a win today.”

Tyler Reddick finished just over 12 seconds behind in second, but he had a very interesting day. For much of the race, Reddick’s Broken Bow Records Ford appeared to be leaking something. Drivers behind him complained loudly about their windshields being covered by grease from Reddick’s truck. The TV panel of his Ford F-150 was nearly black with fluid by the midpoint of the race. During the final caution, NASCAR black-flagged Reddick and forced him to pit road for a “consultation.” While there, the team took shop towels to the No. 19 and wiped all the grease off the truck. However, the team did not find any leak at all. Given that result, crew chief Doug Randolph was very upset with NASCAR and made his opinion known. Regardless, Reddick had to restart at the very rear of the field with Larson and everyone else that topped off their fuel cells.

Peters took advantage of his fresh rubber and charged back up to a third-place finish. Suarez was fourth, while Sauter, who led a race-high 52 laps, rounded out the top five.

Erik Jones, despite a variety of struggles all weekend, was the only other driver to finish on the lead lap in sixth. Larson was forced to settle for seventh. Gallagher was eighth followed by Matt Tifft, while John Wes Townley was 10th.

Matt Crafton was the victim of unforced errors and bad luck. He came onto pit road to make a green-flag stop on lap 82 just in front of Mason Mingus. Mingus proceeded to attempt his entry at too high a speed, sending him into the tri-oval grass.  With all the rain that fell Friday, the nose of his Billy Boat Motorsports Chevrolet dug in immediately, ripping the splitter off of the No. 15 and popping a wheelie before coming to rest.

Since Crafton was on pit road prior to it being closed, he was free to pit. However, there were two errors. One, the No. 88 team cost themselves a lap by taking four tires. After the stop was completed, Crafton drove through too many pit stalls exiting. As a result, he was sent to the rear for the restart and not allowed to take the wave-around. An additional stop for a splash of fuel resulted in Crafton finishing three laps down in 14th. The finish dropped him back to third in points, 11 behind Jones.

The Camping World Truck Series will be back in action next Saturday in the UNOH 175 at New Hampshire Motor Speedway.  Coverage begins at 1 p.m. on FOX Sports 1.