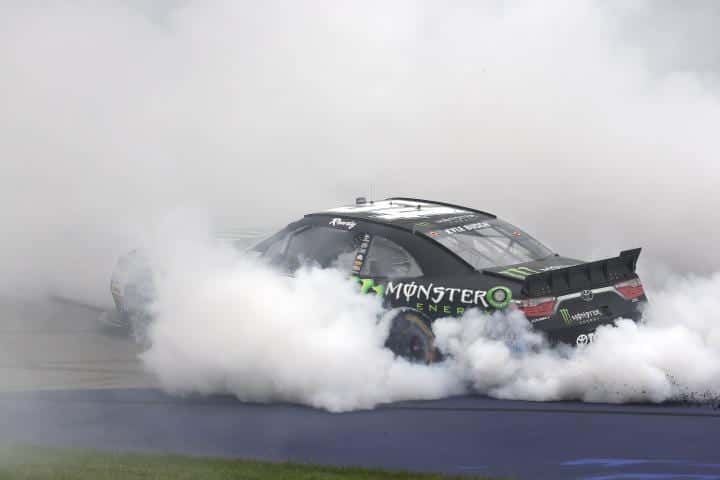 Joe Gibbs Racing drivers Kyle Busch and Matt Kenseth were certainly fast, and during the final 25-lap run to the finish of the 26th race of the NASCAR Xfinity Series season, the battle certainly became furious. When the dust settled, Busch was able to best Kenseth and win the Furious 7 300 at Chicagoland Speedway, his 74th career NXS victory.

After the fifth and final restart of the race with 53 laps to go, Kenseth was able to pass Brian Scott for the race lead and extend the gap over the rest of the field. Busch would eventually catch his teammate and with 25 laps to go, the two were side-by-side for the lead. Busch completed the pass with two laps later and it appeared that it was over, but lap traffic with less than five laps remaining cost Busch time, and Kenseth pounced. A bold dive-bomb going into turn 3 got the No. 20 car the lead momentarily, but Busch was able to pass him back and take the checkered flag first.

It went well for Busch. Not so much for Kenseth, who hit the wall in turn 4.

“The best car didn’t win tonight, but the best driver did,” a somewhat dejected Kenseth stated. “Kyle just did a better job of driving than I did.”

After the race, Busch’s No. 54 Toyota was found to be too low in all four corners in post-race technical inspection. The car will be taken back to the NASCAR R&D Center in North Carolina for further inspection. Any penalties that are assessed will be announced next week.

Darrell Wallace Jr., who was able to make it to the finish without running out of fuel, finished third for his best career NXS result. Paul Menard, in his final NXS start of the season, finished fourth, with his Richard Childress Racing teammate Ty Dillon finishing fifth. The fifth-place finish for Dillon moved him back into second in points, 25 points behind Chris Buescher, who finished seventh.

“Seventh is not necessarily successful… we need to be running top five,” Buescher stated. “We want to compete for more wins this year.”

The third driver in the championship battle, defending series champion Chase Elliott, finished a disappointing 14th after collecting his first win of the season one week ago at Richmond. Elliott is now third in points, 28 behind Buescher.

Ryan Blaney, piloting the No. 22 Ford for Team Penske, had a night he will probably want to forget. He brought out the first caution of the race on lap 22 when his left-rear tire blew, damaging the left rear of his car. Contact with the wall in turn 4, which brought out the third caution of the race on lap 103, effectively ended his night. He would finish 35th and lose substantial ground to the No. 54 in the owners’ championship battle.

In addition to the two cautions caused by Blaney, two debris cautions and a caution for Mike Harmon and Landon Cassill‘s engine failures slowed the race for a total of five times.

The Xfinity Series will return to Kentucky Speedway next weekend for the VisitMyrtleBeach.com 300. Brad Keselowski went to Victory Lane when the series was at the 1.5 mile track in July. The race can be seen on Saturday, Sep. 26 at 8:00 p.m. ET on NBCSN.

And not a mention of the EMPTY stands! The series is dying and yet the writer chooses to give us another let’s pretend Cup drivers are not driving away the fans story.

John, I agree. The writer seems to be trying (too hard?) to give the impression that the race was really exciting, when, in fact, it was a total bore and a waste of an early evening. The media has become gutless cheerleaders for the Cup drivers destroying this series to inflate their egos. It is also becoming very sickening reading more about the owner’s championship than the driver’s title. What really disappointed me last night was Dale Jarrett praising Joe Gibbs for putting Busch and Kenseth in the race. He went on about how the Cup Camary was very similar to the xfinity Camary, that the set-ups were similar, and the tires were the same, so by running last night will give them both a distinct advantage. He went as far as to call it a very smart move. Sheesh! Does that mean that, with the remaining races that are companion races, Gibbs intends on running Busch, Kenseth, and Hamlin in the Xfinity races, and even going as far as pulling Suarez and replacing him with Edwards? Coach Joe is ruthless! I bet he does!

Also, want to bet that when NASCAR takes Kyle’s offending car back to the research center, and put it in that secret closed room where nobody witnesses the inspection, that they don’t find anything? After all, it’s a Toyota, and a Gibbs Toyota at that. All will be well, and there will be no penalties.

And yes, I think Toyota is getting preferential treatment right now, which must be really peeving Rick Hendrick.

Maybe we have it backwards. That it is only the hype and hoopla surrounding the Cup series that let it avoid the same fate as the Xfinity and truck series.

And if you can win by breaking the rules with impunity, knowing you will only get a meaningless fine, why not? And whats the point of having rules in the first place.

Maybe it’s time (finally) to take away the win. The time of “Fans should leave the track knowing who won” should be replaced with “He cheated and wasn’t disqualified?”

“Seventh is not necessarily successful… we need to be running top 5,” Buescher stated. “We want to compete for more wins this year.”

And Buescher would’ve been running in the top-5 had it not been for the regular cup guys running in a lower series.

When will a writer/NASCAR media take a stand at how detrimental this practice has been to this series? Probably not soon. Only after the series completely implodes will these writers write article after article about the serious issues that plagued the series and only then offer suggestions and ideas as how NASCAR could’ve solved these issues.