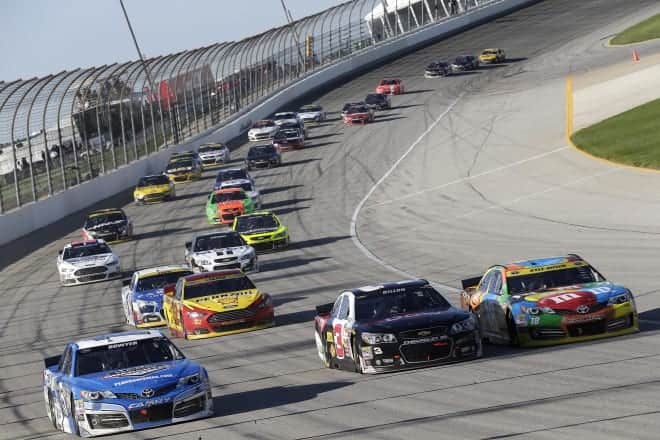 The drivers are at Chicagoland this week, and I am returning from a long trip in the mountains of Colorado. The NASCAR points reset this week with the first race of the chase and I have decided to reset my team also. This week I will pick a whole new team for NASCAR Fantasy Live for those of you who have not been following along with my team week to week it will give you a fresh start.

So let’s talk a little bit about Chicagoland. This will be a 267-lap race at the familiar mile-and-a-half distance. Drivers that have run well at Chicagoland in the past are Brad Keselowski, Kevin Harvick and all the Joe Gibbs Racing entrants. Personally I like the way the Richard Childress Racing cars have looked in the past here and they continue to look strong this week. The JGR guys look strong again this week, and there is some great opportunity with Denny Hamlin starting closer to the back due to the rainout of qualifying.

So lets take a look at my team for this week, once again this is starting from scratch with no money in the bank.

Keselowski’s history here is hard to ignore as he has won two of the last three races. He’s looked good in the practices so far and seems to be optimistic about his car. Keselowski rolls off the starting grid in third and is a threat to lead a ton of laps. In the past few weeks, the Penske cars seem to be the team that can run with the JGR guys and it looks like they brought their A game again this week. I look for Keselowski to be a factor throughout the race.

This is a pick based off of pure speed. Truex has been fast in all the practices so far and looks to have one of the fastest if not the fastest car this week. The Furniture Row Racing team was fast on all of the mile-and-a-half tracks in the early part of the year and seemed to have lost a touch recently. It looks like they have found some of that magic they had earlier in the year and have come with speed this week. That being said, it appears all of the RCR cars are running well in the practices and FRR is a Childress-affiliated team. Let’s hope this speed transfers over to the race. Truex starts in the fourth position and should be a factor early and often.

Much like the last 10 weeks, the JGR cars look fast and Hamlin is no exception. Hamlin ran the second fastest time in the first practice session on Saturday, and his car looks to have pretty good long-run speed. Hamlin starts 29th and should move up through the field quickly. That will help to score you some nice place-differential points. Considering the speed that the JGR guys have had, I wouldn’t even put it past him to lead a few laps. I look for the FedEx Toyota team to take advantage of both their speed on the track and their speed in pit lane and move up through the field relatively quickly.

I’m not going to lie… I have some qualms about picking Ragan. He seems to be fast week in and week out, but has problems finishing the race. With that being said, I like that the No. 55 team is starting in 28th and looks to have what could be top-15 speed. Let’s hope Ragan can keep the car under him the entire race. If he does, he should have a good finish. I am curious where Ragan will end up after this year and wonder what he could do with solid equipment in a solid situation.

I am bullish on the RCR and Childress-affiliated teams this week, and Scott’s is one of them. Scott has shown flashes of brilliance this year and should be a great pickup for the price this week. The No. 33 car is starting in 21st, which is a little bit further up the starting grid than I would like to see, but I don’t doubt he can finish in the top 15.

I have been impressed with the pure speed he has shown this week both on the short on the longer runs.

I think those bow-tie boys might have something for JGR this week.

We missed you. I love Colorado – I lived in Summmit & Eagle county. Which parts were you exploring?

Thanks to your help, I am currently sitting in the top 50 for Nascar Live. So I am looking to make some moves up the leaderboard with fast laps and laps led. This week I like the 2, 4, 18, 48, 78, but can only pick 3. Please help me decide.