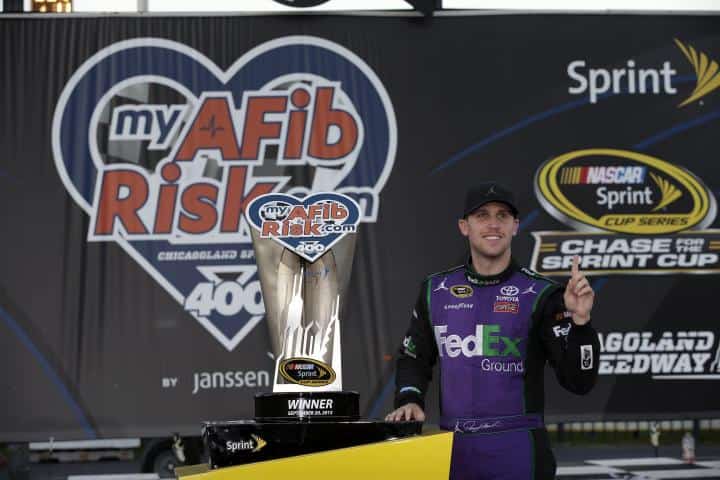 The 2015 Chase for the NASCAR Sprint Cup championship started off with a bang at Chicagoland Speedway.

For Denny Hamlin, it was a surprise victory as the Joe Gibbs Racing driver stayed out under the final caution to grab the lead from Jeff Gordon on old tires and win for the second time in 2015.

“I was going to drive in there and hope that everything worked out,” Hamlin said of the restart with five laps to go. “This Camry was so fast today. Coming back from a lap down, we had a fast car. We were just running under green, over and over and over and I thought we would never get back on lead lap.”

Hamlin started the afternoon back in 29th – the lowest Chase driver – and spun on lap 2 while racing AJ Allmendinger. Suffering no damage and battling back, Hamlin now punches his way into round two of the Chase with his first Chicagoland win.

“We were passing the eighth-place car and we started in the back on that first green-flag run – before I crashed,” said Hamlin. “Luckily, that one caution came out that allowed us to get that wave around and get back on the lead lap.”

Finishing second was JGR teammate Carl Edwards. The Southern 500 winner overcame a speeding penalty on pit road, suspected engine issues and running out of fuel to put up a strong points day.

“It was a big day for us,” Edwards said. “[Engine issues] made me real nervous, made me sweat a little bit. I heard a noise, it didn’t run right and then it back fired the rest of the day. That thing hung on. Something probably broke and for it to live that long, I think, is really spectacular. That can be the difference for us.”

Kurt Busch had the race win in hand before the final debris caution flew with nine laps remaining. Busch joined Hamlin and Gordon to stay out and fell to a third-place result.

“It was the difference maker today,” the elder Busch said of the last caution. “Overall, really proud of this team and everybody at Haas Automation. The caution came out there at the end, and I thought we had the right strategy but we didn’t.

“But this is a points day. This is a long journey through these next 10 weeks.”

Kevin Harvick had among the quickest cars before contact with Jimmie Johnson on a lap 134 restart caused Harvick to cut a tire and crash a few laps later.

The reigning champion spent 57 laps in the garage before returning to the track to finish 42nd.

“I got a fairly good restart,” Harvick said. “I saw those guys coming on the apron – they must’ve got together and had a good run up.”

“I just held my ground and [Johnson] slammed into the side of the door like I wasn’t even” there. Spotter was telling me four wide and I guess he just figured he’d come up the race track.”

Boiling in frustration, Harvick later struck Johnson in the chest during a scuffle between the two outside his motorcoach.

“Restarts were wild and crazy,” Johnson said before the scuffle. “Just trying to be smart but at the same time, we had such a good car at the start then we were off, then we were back on.”

Harvick sits 22 points behind the cutoff for round two and will have the next two races – Loudon and Dover – to win or point his way in.

Hendrick Motorsports teammate Gordon had an “encouraging” run as the No. 24 driver led the race for 41 laps – the most laps he’s led in a race since Talladega 17 races ago.

Despite the last restart dropping him to 14th, Gordon took notice of the speed.

“I’m very encouraged by how good our Axalta Chevrolet was,” Gordon said. “I knew we were going to have a tough time not spinning the tires – I was just trying to hold pace with Kurt [Busch].

“[Hamlin] got a good run on me, I blocked him, he’s pushing me down and were on the apron. I felt like I did a good job, but I just came up off the apron a little bit too early. He was just able to motor right on by me. Once I got three-wide, we were done. At that point, just trying to save this awesome racecar.”

“I’m very proud of all that I’ve achieved in this sport,” he said. “There’s a lot of stats that are some awesome numbers. This is one of them. We got nine more to go.”

Finishing in the top five was Ryan Newman, who took advantage of the last restart to come home fourth with fresh tires.

“We got a great restart there in the end,” Newman said. “It’s always easier when you got four tires and the guys up front have less. Nevertheless, we had a good restart.”

Rounding out the top 10 were Matt Kenseth in fifth and Joey Logano in sixth with Kyle Larson and Brad Keselowski close behind. Kyle Busch led a race-high 121 laps, but had to settle for ninth while Aric Almirola picked up his second straight top 10.

Of the 16 Chase drivers, 15 finished in the top 20, with Harvick the lone one out.  He’ll have to bring his A-game to Loudon next week and Dover in order to put himself in position to advance.