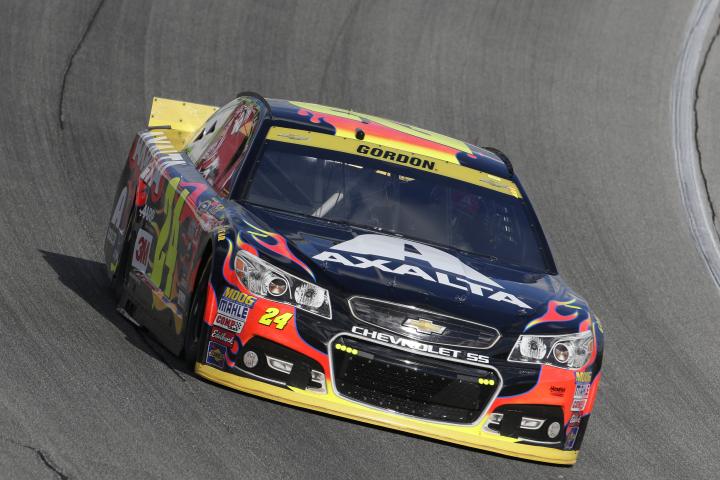 It’s been a difficult final season for Jeff Gordon, but in the opening race of the 2015 Chase for the Sprint Cup, the Hoosier gave fans reason to be optimistic.

After qualifying 10th, Gordon rose to the top during Sunday’s MyAFibStory.com 400 at Chicagoland Speedway, taking the race lead on lap 144. Gordon proceeded to lead 41 laps and contend for the race win, running second when the race’s final caution fell with 10 laps to go.

Unfortunately, Gordon’s day went south from there, as he spun his tires on the ensuing restart and dropped from second to 14th on the race’s final run.

“I knew we were going to have a tough time not spinning the tires,” said Gordon of the race’s final restart. “On old tires like that, it’s pretty easy to spin the tires, especially when you’re on the front row. So, I was just trying to hold pace with Kurt [Busch]. I knew that I had Denny [Hamlin] behind me on older tires as well, so I was somewhat encouraged by that.

He got a good run on me. I blocked him. He was pushing me down and we were on the apron. I felt like I did a good job, but I just came up off the apron a little bit too early and he was able to just motor right on by me on the inside. And once I got three-wide, we were done.”

Gordon was disappointed with his finish. However, following the race – which saw Gordon tie Ricky Rudd for the most consecutive starts (788) in NASCAR history – the Hendrick Motorsports driver remained optimistic about his title hopes.

“That [car] was fantastic,” said Gordon. “I’m very encouraged about how the Axalta Chevrolet was today, the whole team, and that’s what we’ll be bringing every single week. Hopefully we won’t have to worry about some of these late cautions ruining our day like that.”

Gordon’s finish, while not representative of the speed his car showed, was good enough to put him ahead of the Chase cutoff after the playoff’s first race. Gordon currently sits 12th, three points ahead of 13th-place Jamie McMurray.

Asked about how it felt to lead more than 10 laps for the first time since Talladega in May, Gordon took a moment to praise his team.

“I’m very encouraged by that. I like this racetrack,” said Gordon. “I thought the team brought an excellent racecar. They work extremely hard.

“Everybody at Hendrick Motorsports has been collectively working together and I think it showed with our No. 24 car today.”

A 92-time winner on the NASCAR circuit, Gordon is still looking for his first win of 2015. The No. 24 team will get another chance at victory lane next weekend at New Hampshire Motor Speedway, a track Gordon has conquered three times in his 23-year Cup career.

Another bad call by Alan Gustafson. Gordon has struggled on restarts all year, and leaving him out there on old tires was a recipe for disaster. Took me back to Texas last year when they tried to put 4 tires on the car after the spin and it cost them staying on the lead lap.