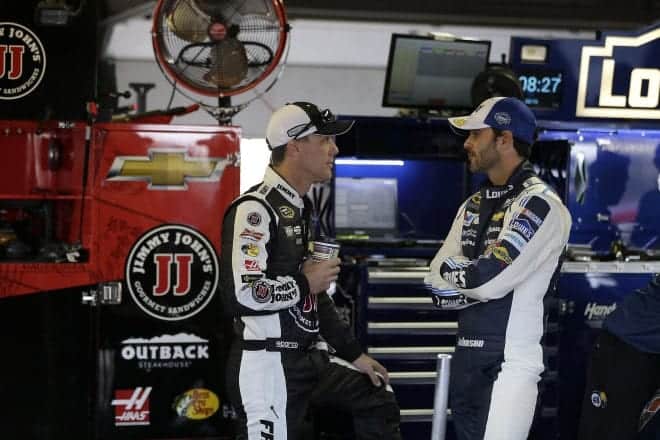 After suffering a flat-tire as the result of contact with Jimmie Johnson, Kevin Harvick told his crew to let him know when he was around the No. 48.

After failing to catch up with Johnson, Harvick sought him out in the infield

Harvick, the defending NASCAR Sprint Cup Series champion, was running second on a mid-race restart when Johnson dove onto the 1.5-mile oval’s apron to attempt to pass him. The two fought for space for a few moments before making contact, resulting in a tire rub and eventual cut tire for Harvick.

Johnson would hold on to finish 11th, while Harvick would end the first race of the Chase for the Sprint Cup in 42nd, 58 laps down.

Johnson blamed the daring move and eventual contact on a push from fifth-place Joey Logano and lack of space from Harvick following the incident.

“I got a push from behind and went down on the apron,” said Johnson. “I’ve got to get back on the track, so I just tried to inch my way back up on the track, and we had a little contact there. It happens, and unfortunately Kevin got a tire rub out of that.

“He didn’t give me any space. He was pinning me down, and I’ve gotta get back up on the track.”

Johnson described the race’s restarts as “crazy.” With passing difficult as drivers struggled to overcome aero issues, restarts proved the best time to make up ground.

“Whenever you have this big, flat apron like that on the bottom it really creates a lot of craziness,” said Johnson.

Harvick is no stranger to anger issues. Nicknamed “Happy” in his younger years, the California native has been involved in multiple altercations throughout his careers, feuding with drivers including Ricky Rudd, Jeff Gordon and Ty Dillon.

““I assumed he would try to find it as my fault,” said Johnson. “I just simply needed a lane to get back onto the racetrack. I by no means was trying to do anything different.

“I’ve seen him on the flat working his way up and looking for a racing lane. That’s all I was doing. I was on the bottom trying to get back up onto the racing surface and he was trying to pin me down. I’ve gotta get back up there, or else there would’ve been a hell of a mess in turn 1.”

The Diva backed down pretty quick when the Punk came out?

why did kevin harvick pushed my favorite driver jimmie johnson . please keep me up dated and send me more information

why did kevin harvick pushed my favorite driver and my number one fan 48 jimmie johnson. here is my address 4817 forest ave oneida ny 13421 i wanted to hear more about it by email or address. kevin can be a assole at time

I was putting new rotors & pads on the wife’s car during the, ahem, race. It occurs to me that neither of these two pansies would dare get brake dust into their manicured digits. Spare us the tough guy act, pretty boy. You ain’t Ricky. Or Dale. Or Junior Johnson. Or Cale. Or Bobby…

Can you imagine these pansies racing Curtis Turner or Buck Baker? Or anyone else who really wanted to win?

I Cant believe 42 drivers are scared of the
DOUCH BAG “HARVICK”..
if he doesnt get it his way he gets mad..i really dIid Llike him until last year when he show he’s true colors,Wanting to Start Trouble. then tried to say he was sorry. And wanted to be a good “DAD”#!/!# HE thinks he’s never wronge…
Hope he stays 16 in points… BS ER#!!!!

The Article is backwards. Jimmie came to Harvicks Coach. The video shows Harvick coming out the door of the Motor Home. Not a fan of either one of them and think they were both at fault. Just because Jimmie is forced onto the flat, doesn’t mean Kevin has to move and give him room to come back on track. But Kevin has to know the outcome if he doesn’t. They both think that deserve special treatment..