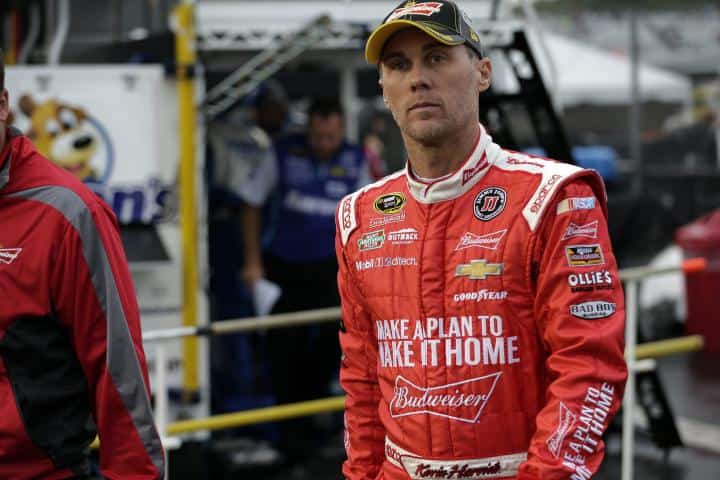 The defending NASCAR Sprint Cup Series champion’s drive to another title has taken a significant hit.

California native Kevin Harvick suffered heavy damage to his No. 4 Jimmy John’s Chevrolet as he spun into the wall to force a lap 137 caution in Sunday’s MyAFibStory.com 400 at Chicagoland Speedway, the opening round of the 2015 Chase for the Sprint Cup. Harvick, the 2014 NSCS champion, lost control of his Chevrolet after suffering a cut tire as the result of contact with Jimmie Johnson on a lap 133 restart.

Running in second, Harvick was leading the inside line on the restart when Johnson – who received a strong push from fifth-place Joey Logano –  dove under him. The two made contact as Harvick pushed Johnson below the 1.5-mile circuit’s apron.

Harvick was forced to the garage area with extensive damage to the rear-end of his machine. Harvick would return to the track 57 laps later before finishing 42nd.

The difficult outing serves as a significant blow to Harvick’s title hopes. The Stewart-Haas Racing driver has only one win between the final two tracks of the first round, a 2006 triumph at New Hampshire Motor Speedway. Harvick has averages finishes of 13.52 and 14.72 at New Hampshire and Dover International Speedway, respectively. His 15 Chase competitors finished inside the top 20.

“I wouldn’t say what he did was any different than other situations I’ve been in like that,” said Johnson. “When you’re in Kevin’s situation, you want to give that inside car a bad angle so they’ve gotta lift. I was fine with lifting, but I have to get back on the racetrack, so I worked my way back up onto the track. I by no means was trying to do anything different.”