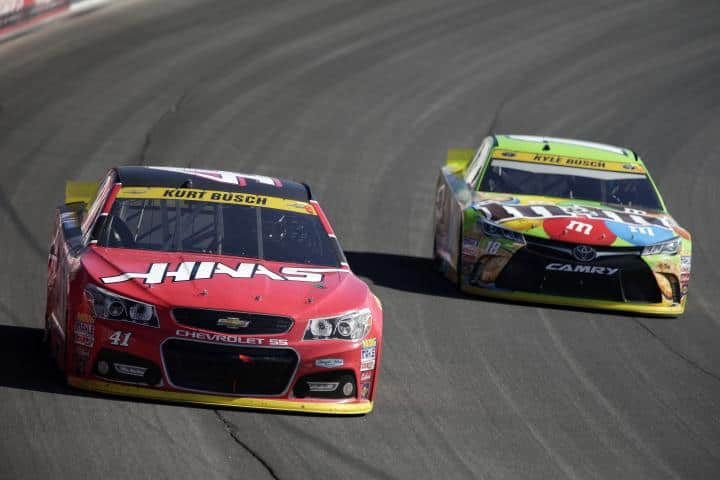 Late-race cautions may be exciting for fans, but they often cost drivers when it matters most.

Such was the story for Kurt Busch in Sunday’s MyAFibStory.com 400 at Chicagoland Speedway. Busch, who entered the Chase with two victories after missing races early in the season, was leading by over three seconds with 10 laps remaining in Sunday’s race when a debris caution fell on the field.

Busch stayed out under the yellow, hoping multiple drivers would stay out with him. In typical NASCAR fashion, that wasn’t the case.

Busch would lose the lead to race-winner Denny Hamlin on the final restart before finishing in third. The Nevada native was left wondering “what-if” thinking about the race’s final caution.

“It was the difference-maker today,” said Busch. “But overall, I’m really proud of this team and everybody at Haas Automation and Stewart-Haas Racing. This Chevy was fast. It was fast enough to win. When the caution came out there at the end, I thought we had the right strategy, but we didn’t.

“But this is a points day. This is a long journey through these next 10 weeks. We weren’t given a hall pass now, through Loudon and through Dover. We’ve just got to work hard as a team and saddle-up.”

While Busch found the silver lining, he couldn’t help but reflect on a similar incident that occurred to him early in the season.

“This isn’t just a win and take a couple weeks off, but we had a winning car today. It’s kind of a shame. We had a good run at Fontana earlier this year and it kin of ended up the same way.”

Busch might have been disappointed, but Dale Earnhardt Jr. was left frustrated. Earnhardt, who made the Chase following wins at Talladega Superspeedway and Daytona International Raceway, struggled with handling but ran inside of the top 10 for most of the race. However, the late race caution and ensuing restart ultimately cycled Earnhardt back to 12th.

“When you have a late yellow, it takes all the damn work you did all day out of it. A little frustrated, but we were only running ninth or 10th. We’ll move on to the next one.”

The caution flag fell three times for debris throughout the 400-mile event, including the final two cautions on the day.

Dale Jr, who was ultimately GIVEN wins at restrrictor plate races…

No happy campers at Stewart-Haas. Johnson takes out Harvick, and NASCAR takes away Kurt’s 3 second lead with 10 laps to go. But it was expected since Aero meant everything. Overall, a very boring race.

I did get a kick out of the booth making a big deal of the “12 lead changes” that occurred during the first 200 some-odd laps as if that was an amazing amount of passes and the fans should be thrilled. If you ran 200 some-odd laps and only have 12 lead changes then you have one dull race. A lot of follow-the-leader is what I saw going on as I watched the ticker-tape as they at the top of the screen.

I also noticed that the word “chase” has now been replaced with “playoff” during the race. Let’s face it, the Chase/Playoff is here to stay for the next 50 years because some corporate sponsor thought it would be a great idea and NASCAR rather sell out the sport verses give up the revenue.

I think “those kind” must be code for fake.

Do you think Junior will be fined for actions detrimental to……..or whatever rule they use to punish truth telling. Wow, stop the presses, NASCAR throws fake cautions to “guide” events. Who knew?

Watching the laps wind down I tried to guess which lap the caution would be thrown (I went with 12 to go). It’s really sad when you know that it is coming.

Yeah, other than restarts there was very little to see. I’m still shaking my head at NASCAR’s decision to stick with the 2015 aero package for the Chase went it was proven to be a disaster throughout the season. The low downforce package worked sooooooo much better at Kentucky and Darlington. What an opportunity missed.

So an unapproved leader with 10 to go caution decided the race. The races aren’t fixed though, just manipulated openly. I am SO glad that I didn’t waste my time watching even a lap this week. I’m trying to decide whether I’m done for the season, or maybe just done.

John, to add to that it added insult-to-injury that the booth decided to show us the reason the caution was brought out by showing us a car in the pits (can’t remember who nor does this article mention it) and stating that the car brushed the wall and you can see the heavy damage to it. This might have been good if the car that they showed actually had extensive damage to it. I had to back it up and freeze the frame and I still couldn’t see the extensive damage. The thing is that I didn’t and don’t have a favorite so it isn’t like I’m saying this because I felt my driver got a bum deal because of the caution. I’m saying this because I have a set of eyes and a brain yet NASCAR and the booth seem to think I’ll never notice.

Good point, you can call the obvious and it doesn’t have to be because your driver didn’t win, it is because something is wrong. I did not watch the race I caught the “highlights” (if you can call them that), and I gotta say it seemed very weird to me who won the race and who came in second..etc. Strange indeed. The running order seemed pretty set with Kurt leading and then all of a sudden the natural nail biting (NASCAR THINKS) caution comes out and the whole running order gets shuffled to hell and the Toyo’s are there. WTH?

This is Kurt’s two for two…….interesting. Has he been in the news lately for faux bad press? Only thing I saw was he got engaged. Oh well. WWE.

…and I am not a fan of Kurt. Just saying. Typical Nascar.

Why don’t they just run 20 lap shootouts, then draw names out of a helmet for the final winner. “Debris” in turn 3, “caution”………Total NASCAR Bull-sh*t, no one believes that crap any longer NASCAR……..and you wonder why the stands are half empty ???

Nascar manipulation and agendas, much like Richmond the race was boring as hell, so much we can talk about this crappy race, I would like to point out that we went the whole race without a wreck, then all of a sudden another debris caution which was predictable as the sun coming out, and it’s kinda funny that the so called debris or wreck was for a non significant driver who had a momentarily lapse in driving skills. Oh, and by the way who also drove a Toyota….

AMEN…The clown stayed out of trouble the whole race…seems he got the call with 11 laps to go and his wheel suddenly turned right. I swear they should have a camera on these back markers. It happens way too often and I suspected for years it was on purpose.