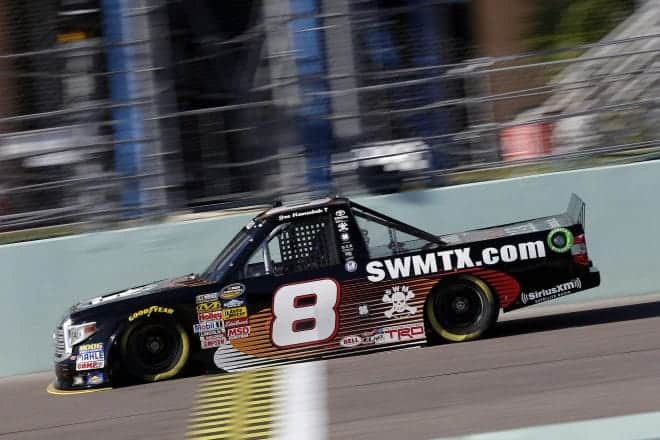 In a Nutshell: After rain turned the American Ethanol E15 225 into a Saturday morning race, John Hunter Nemechek took the win by finishing 12.014 seconds ahead of Tyler Reddick. The 18-year-old led just the final two laps after Kyle Larson ran out of fuel to score his first career victory. Timothy Peters, Daniel Suarez and Johnny Sauter rounded out the top five. Larson went on to finish seventh as the first truck one lap down.

Congrats @JHNemechek on an awesome run today. We love you! pic.twitter.com/lM6gFPHZRL

Who Should Have Won: Simply put, Nemechek had enough fuel when it counted and was able to take advantage of late leader Larson’s tank going dry. But it wasn’t without some tense moments for Nemechek, who ran out of fuel in turn 4 on the white-flag lap. Crew chief Gere Kennon had his driver stretch the final tank of fuel 56 laps en route to Victory Lane.

Saturday morning’s race marked career start number 200 for Red Horse Racing driver Peters. In his previous 199 starts, the driver of the No. 17 Toyota had eight wins, 42 top fives and 94 top-10 results. After leading 41 laps Saturday morning, fuel mileage left him to settle for a third-place finish, the best result this season for the 35-year-old, who has struggled mightily this season.

“We definitely had a great Red Horse Racing Tundra here today. When we came down pit road under the green flag and the caution came out, it was the right call to go through so we didn’t get caught a lap down,” Peters said after the race. “This is what this team is about right here, we’ve really worked hard and we’re coming into our own right now. I’m just proud of Marcus (Richmond, crew chief) and all the guys on this crew did an awesome job. Not a bad day for us.”

With the way things tend to change in the Truck Series, 200 starts is impressive in itself. Add in the sponsorship puzzle that often sidelines drivers long before they’re really given a chance to shine, and suddenly that milestone means even more.

Peters hasn’t been the winningest driver or major championship contender he’d maybe like to be, but he seems pretty content with where he is currently, and as a veteran, he’s someone the up-and-coming drivers can lean on when they need advice.

After crashing out of his debut race at Dover International Speedway in late May, just 32 laps in, Jesse Little returned to the Truck Series Saturday morning. But things didn’t get much better for the 18-year-old piloting a fourth ThorSport Racing entry.

Just 14 laps in, Little was forced to the garage area with a broken valve spring that ended his day in a disappointing 30th-place finish.

“We had a really good truck today and it was just starting to come to me in the early laps I felt like,” Little said. “We could have definitely drove up into the top-10 with no problem. I was just trying to hang out until the competition caution on lap 30, so we could get it handling even better.

“I was coming out of turn 2, going down the backstretch, and it flooded, acting like it went down a cylinder, or a plug wire came off. We ran around for a lap and then caught a caution. On deceleration, when the rev started to drop, you could hear a lot of noises that you weren’t supposed to be hearing. Unfortunately, we broke a valve spring, ending our day much earlier than we hoped for.

“However, the truck is going home in one piece and we know it was fast. It’s frustrating because you can’t control these kinds of things, but everyone on this team did a great job this weekend. Hopefully, we can get Protect The Harvest back on track soon and have some fun.”

With only 46 laps of Truck Series competition completed in his two races, it’s not exactly the seat time Little needed. What a driver with his limited experience needs more than anything else is a complete race and the opportunity to learn from other drivers on the track and the long green flag runs.

Daniel Hemric, who rode the momentum of five straight top-10 finishes into Chicagoland Speedway probably couldn’t get away from the track quick enough. After running 14th quickest in practice on Friday, a motor change sent him to the rear of the field Saturday morning.

Early in the race, Hemric suffered a rear end issue that sent him to the garage area, dashing any hopes he had of heading to Victory Lane. As it turned out, the No. 14 Chevrolet lost its drive shaft.

And if that wasn’t enough, he returned to the track 58 laps down, hoping to limp home while gaining the most points possible, still facing mechanical gremlins. Heading down pit road, Hemric suffered brake problems and nailed his jackman, sending him flying onto the windshield of the No. 14 before rolling down onto pit road. Thankfully, the crew member was able to shake it off and wasn’t injured, but the incident put an exclamation point on an already miserable day where he finished 25th.

Scary scary deal on pit road to say the least…Thankful my boys are all okay, they are for sure as tough as they come!

Needless to say, NTS Motorsports is likely happy the American Ethanol E15 225 is in the rear view, and the good news for the organization is that the series races again next week, making it much easier to shake off such a poor showing with a driver that has excelled for much of the year.

Hate that all the effort everyone at @TeamNTS and @TeamChevy put in to get to @ChicagolndSpdwy was over shadowed by so many things today….

Thankful we get to do it all over again next weekend at @NHMS and more than excited to put this weekend behind us. Move forward.#haveFAITH

Points Update: Jones maintains the point lead – now up to 10 markers – following a sixth-place finish. Runner-up Reddick moved up one position and now sits third, just a single marker ahead of Matt Crafton. Sauter remains fourth, 52 points back, and Hemric rounds out the top five.

The rest of the top 10 remains unchanged. Hayley holds the sixth spot over Peters in seventh. John Wes Townley is eighth, followed by Gallagher. Ben Kennedy rounds out the top 10.

“This is definitely a special moment, and I can’t thank these guys on this NEMCO Motorsports team enough. We work hard in the shop to put these Chevrolet trucks together, and we do the best we can. We’ve had a few close calls, but I can’t thank everyone enough. It’s definitely an amazing feeling to win tonight. Gere [Kennon] kept telling me to ‘save fuel, just save fuel,’ that last run and that’s what we ended up doing. I ran out [of gas] coming out of turn 4. It was definitely a great strategy that he had worked up in his mind. I should know never to doubt him.” – John Hunter Nemechek, race winner

“NASCAR though we were leaking fluid and we weren’t, but it ended up being something that actually probably set us up and put us in position to win like we were in. Looking back at it, it ended up being something that helped us out and got us a good finish. We knew it was going to be close. A lot of people were running out of gas. As much as we wanted to push hard and chase for the win, it’s almost silly. You have to realize the risk versus reward. Very early this year in a similar fuel mileage race, we ran out coming to two to go, leading the race. We ran out off of [turn] 4 and never made it back and wound up not finishing the race. We didn’t want to do that again.” – Tyler Reddick, finished second

“[Trying to conserve fuel is] just the way the trucks are built. You can’t change it unless a caution comes out. I saw rain – whatever I could see I was radioing back in. It was a great run for our Tundra today. Thanks to the guys back at the shop and Triad motors and all the guys here – pit road was awesome. This is what this team is all about. We’ve been hit or miss but I feel like we came into our zone. We’ll get on a roll and we have seven more opportunities to go to victory lane.” Timothy Peters, finished third

“The racetrack was eventful, as always, and the groove moved around. This place has obviously developed a lot of character over the years. What a great Nextant Aerospace Toyota today. I’m so proud of these guys at ThorSport Racing. Just a great truck. We ran out of fuel on pit road, about halfway down, and we obviously lost a lot of track position, and we just couldn’t get it back. We got back to second and lost a little bit, I got a little bit too tight. Shame on me for not trying to keep up with the race, I guess. It was a solid day, and I’m proud of these guys. It’s an okay thing with a top-five finish, but I felt like we had the truck to beat yesterday after practice, and tried to manage expectations. It just didn’t go our way today. We just have to be a little bit sharper.” – Johnny Sauter, finished fifth

Up Next: The Camping World Truck Series heads off to New Hampshire Motor Speedway next Saturday afternoon. Last year, Cole Custer scored his first career victory over Darrell Wallace Jr. Coverage for the UNOH 175 begins at 1 p.m. ET on FOX Sports 1; the race can also be heard on your local MRN affiliate and SiriusXM NASCAR Channel 90.