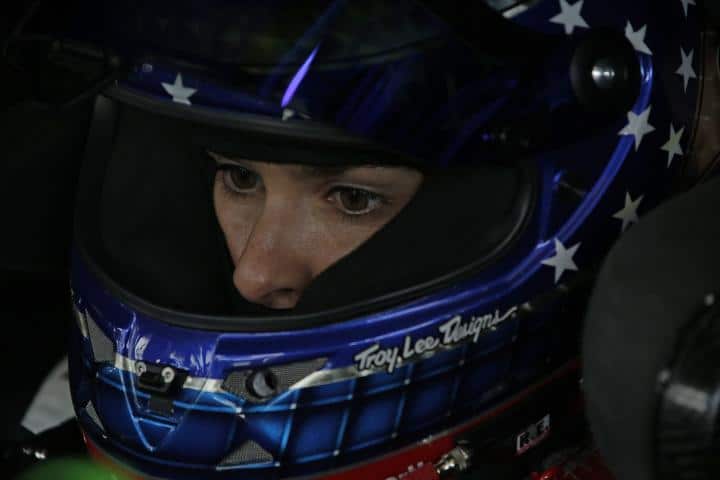 Notice that the title of this column is “ridiculous fights,” and not actual, intense or compelling fights. These are short-lived, one-sided, wimpy, “what just happened there?” fights that make the highlight reel because because they’re ridiculous.

We all saw this one go down on Sunday at Chicago, and it was a bit of a disappointment if you wanted to see a two-sided conflict. Even when Kevin Harvick popped him one in the chest, Jimmie Johnson was having none of it. Johnson merely pointed a finger at Harvick, then turned around and walked away. Which probably made Harvick, who was looking for a reaction, even madder.

Danica Patrick had a reputation in IndyCar for being a bit of a hothead. She showed that when she marched down pit road, still in her helmet, to confront Ryan Briscoe after the two tangled on a round of stops. Briscoe’s crew actually told him to keep his helmet on as she approached. Then there was her argument with Milka Duno during practice at Mid-Ohio. It didn’t escalate into more than a shouting match but you have to admit she did have a point. It wasn’t her fault Duno was slow. She was just the one who came out and said it. Both incidents and Patrick’s response to the Duno incident are below.

This might have been the closest to an actual fight you’ll see on this list. Marcos Ambrose confronted Casey Mears after a frustrating race at Richmond, and Mears didn’t take too kindly to it, grabbing Ambrose to force further discussion. Ambrose replied with a right hook to Mears’s eye. What makes this one funny isn’t the actual fight, but that it was between Ambrose and Mears. Let that sink in for a minute. Marcos Ambrose and Casey Mears. Possibly the last two guys you’d peg for a physical confrontation, possibly ever. Mears came away with quite a shiner, as evidenced by the second video, shot a day later.

Jeff Gordon climbed out of his car loaded for bear after Brad Keselowski basically ended a dominant season for the four-time champion, but Keselowski had no intention of engaging in much beyond a battle of words. Enter Harvick, who decided Keselowski needed to defend his honor, or something, and shoved the 2012 champ toward Gordon, whose camp needed no further provocation, and it was on. Had Harvick not shown up, it might not have blown up.

We all know how emotion can rule a moment, and that’s what happened here. Michael Waltrip’s punch, thrown at Lake Speed after a run-in at Michigan, might have been more effective if he’d waited for Speed to remove his helmet first. But he didn’t, so it probably hurt Waltrip’s hand more than Speed’s head. Because helmet.

There is that weasel name again and again “Harvick”. He is back to “Harvicking”. Delana is on a crusade on social media to protect her man, and somehow she dragged the kid into it. Jeez women. way to embarrass your man. Delana you put your business out there for the world of crazies to see, don’t be shocked when it turns around and bites you! She seems appalled that she isn’t getting her usual few groupies supporting her on her social media sites and others who are not enamored with her husband are invading her social media. Silly.

Joey Logano knew the recipe for the secret sauce all along. And that comment he made WAS NOT a dig on her, but her juvenile husband. Seems he is and was correct. Gosh, what is going to happen next week that will make Brian and the networks giddy with delight..cause it sure as hell ain’t the racing.

I actually admired Casey for going on RACEHUB the following Monday and admit that what he did wasn’t the smartest thing to do.

That’s amazing!!!! NASCAR has been around for 60+ years and 3 of the 5 most ridiculous racing fights have happened in the last 3 years, and since Danica’s non-NASCAR fight was included that’s in all motorsports, not just NASCAR. What are the odds?

Tough time thinking of something worthwhile to write about this week, huh Amy?

Whatever happened to settling issues in the pits with a tire iron. I bet Delana swings a mean lug wrench.

His wife once asked him where he wanted to be buried, in St. Louis, New York or Montclair.

He truly was special. He was my favorite; that’s why I liked him better than those other guys.

I do sometimes wonder if the whole fighting is good for the sport. Its good for its base and loyal fans but I doubt it will grow the sport. In today’s world of political correctness a random parent channel surfing with their 6 year old and stops to watch the last 20 laps and then a fight breaks out. They are going to switch the channel. Don’t get me wrong it is entertaining to me, just as long as a driver doesn’t get a broken jaw or say harvick punched Johnson and he banged his head and fell stunned to the ground without breaking his fall with his arms and suffers a very serious head injury or worse. It can happen and it is amazing that in a couple of those Gordon brawls in the past couple years no media member was hurt.

Good grief! Have we really gotten to the point that someone who is extremely upset can’t give someone a harmless shove without everyone’s heads exploding? JJ should know Harvick well enough to give him more time to cool down. Frankly, I find a driver that’s not afraid to show their emotions in this PC age rather refreshing. People can’t complain about ‘vanilla’ drivers and then have a breakdown when a driver displays his frustrations. Get over it.

They should have put MW in a cage with Lake Speed after the sucker punch…
We wouldn’t be hearing is obnoxious voice commentating them!

I would think the Gordon/Bowyer brew-ha-ha of a few years ago would make it before the non fights of Patrick/Briscoe and Patrick/Dano. Not even sure why Danica is even on this list, but I’m sure there is still 9 more races to go in the farce, so I’m sure there will be replacements for the current list to complete the transition from a real sport to WWE racertainment.