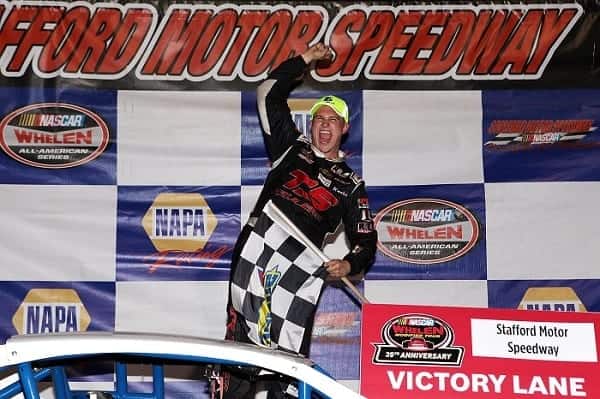 The clock is ticking, and the opportunity for Ryan Preece to race in NASCAR’s premier division is rapidly approaching. After making a bet with longtime friend and team owner Tommy Baldwin, the 2013 Whelen Modified Tour champion is about to knock another item off his bucket list.

Come Friday at New Hampshire Motor Speedway, Preece will be in a Sprint Cup Series race car for the first time in race conditions. Competing for Tommy Baldwin Racing as a teammate to sophomore driver Alex Bowman, he will make his Cup Series debut on Sunday afternoon in the 300-mile spectacle in the No. 98 Chevrolet.

“I was texting Tommy on a Friday, just joking with him and saying to put me in a second car, and he was like nah,” Preece told Frontstretch at Thompson Speedway in mid-August. “When we won at Stafford, he texted me at like 12:30 and I said ‘Cup ride.’ I got a text the next morning on the way to Riverhead and he said he had a handshake deal with Jay Robinson with the 98 number with his motor and Tommy Baldwin’s equipment, car, frame, chassis, setup and everything. I’m excited to go do it.”

Preece, 24, currently leads the championship standings in the NASCAR Whelen Modified Tour by one marker ahead of Woody Pitkat. This season, he joined the TS Haulers No. 6 team owned by Ed Partridge, who recently purchased Riverhead Raceway. With three races left in the season, he tied a career-high with four wins and has a career-best 12 top 10s.

In 2013, he made his NASCAR premier series debut with TBR, running an Xfinity Series race at Loudon, finishing 24th. But the next season, the organization set him up to run two events in what is considered to be the sport’s second-tier division. He raced at Loudon and was scheduled to run at Richmond, but plans changed as he had high hopes for competing in the season-opener at Daytona this season. However, sponsorship did not come through, and this will be his first major opportunity outside of the Modified Tour in 2015.

“My expectations are to run well,” Preece continued. “I’m a racer and I want to race hard. I’m just planning on going up there, racing the guys clean and obviously not getting into any of the Chase stuff. At the same time, it is something that can hopefully open up opportunities. If not, I can say that I ran it and continue what we are doing with the Tour. I want to move up. It’s a goal of mine and I want to make it happen.”

As a preparation for his Cup debut, Preece ran the K&N Pro Series East event at Richmond for Hillman Racing, which fields a part-time car for Travis Miller and runs the full Cup slate with Landon Cassill. Running the No. 41 car, he qualified 35th after qualifying was canceled due to rain. Finishing 14th, he outran Brandon Jones, Collin Cabre, Kenzie Ruston and several other notable names.

Along with racing at Richmond, he will be competing for Ted Marsh in the No. 36 car as a teammate to full-time competitor David Garbo Jr., according to Speed 51. Garbo sits 12th in the standings with a pair of top 10s this year, and Preece tested for the team at Bowman Gray in May.

“You don’t see opportunities like this. I don’t get phone calls from teams. I race modifieds and I do the best I can for the people that I drive for. When a guy like Tommy is giving me an opportunity, it means a lot. I went to a Catholic high school, and they always preached about if you have $5 and that’s all you have and you put all $5 into it, that goes a lot further than if someone put $100,000 in. It just means a lot and it’s hard to explain for somebody like me that may never get the opportunity to race for Roush Fenway, Penske, Gibbs or something like that. To have the opportunity to do it and try to show what I feel and my owners believe that I can do, it means a lot.”