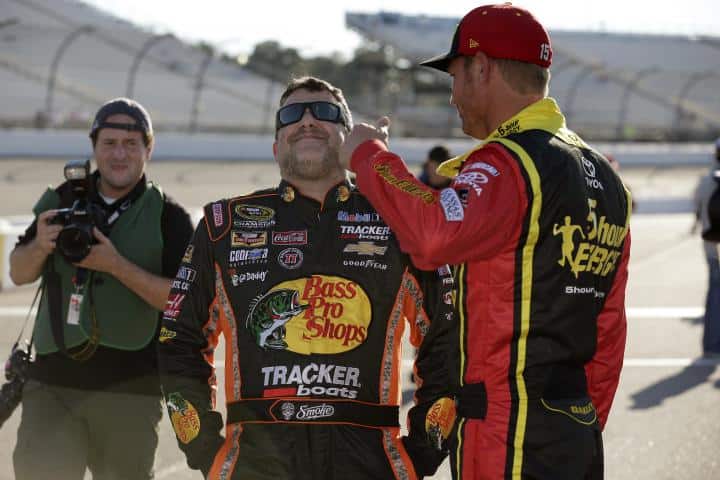 Kasey Kahne needed a new haircut just before traveling to Chicagoland Speedway this past weekend. Where did he go? Great Clips, of course… is there anywhere else? Everyone loves getting a new haircut every once in a while.

Tony Stewart had one of the greatest times on Wednesday as he attended a county fair. Stewart played many games that included Gold Fish as a prize. He later posted this on his Twitter feed, showing everyone his latest trophies.

My new reality… "Middle age is the period of age beyond young adulthood but before the onset of old age." ? #40

Jimmie Johnson turned another year older on Thursday as he is now the big 40. Johnson took to Twitter, expressing his thoughts on the number. Let’s just say, 40 isn’t that big of a number and we hope Johnson enjoyed his birthday.

Wishing I was at arrowhead right now.
Let's go @chiefs!!!!!

Clint Bowyer, who grew up in Kansas, watched some NFL football on Thursday while waiting for the big race weekend at Chicagoland Speedway to arrive. Let’s just hope that Bowyer did not break his television after the game!

.@NASCAR has fired up the Air Titan track dryers to get the track ready. I know this because they are apparently right outside my bus.

Dale Earnhardt Jr. got a nice wakeup call on Friday morning at Chicagoland Speedway. We hope nobody got injured for waking up the entire area!

That's awesome for @JHNemechek first of many wins in this sport!!! @nascar @TeamChevy

Kevin Harvick was one of several drivers to take time to congratulate John Hunter Nemechek on his first win in the NASCAR Camping World Truck Series on Saturday at Chicagoland Speedway. This shows how much Harvick and other drivers respect the great group of young talent coming through the ranks of all forms of stock car racing.

Going from one job to another. Looking forward to joining the @NBCSN gang for the @NASCAR_XFINITY race tonight pic.twitter.com/7ezWG7kF7u

Jamie McMurray joined NBCSN on Saturday at Chicagoland Speedway for the NASCAR Xfinity Series race. McMurray went from the car to the broadcast booth to give fans a different perspective from behind the wheel. This idea is just one of many great ones NASCAR television partners have decided to try this year.

They are very serious about their football ? pic.twitter.com/HUYsB2P8gk

Kyle and Brexton Busch had some father and son bonding while waiting for the race to start at Chicagoland Speedway on Sunday.

The two most unsafe places to be at a #NASCAR race are now the multi-million-dollar motorcoach lot and the safety truck. #NASCIrony

NASCARCasm shared this tweet regarding the two incidents on-track over the last two race weekends. At Richmond, Michael McDowell accidentally hit a safety truck while the race was under caution. At Chicagoland Speedway on Sunday, Johnson and Harvick had an extracurricular activity in the motorcoach lot after the race. Safe to say, he’s probably right!