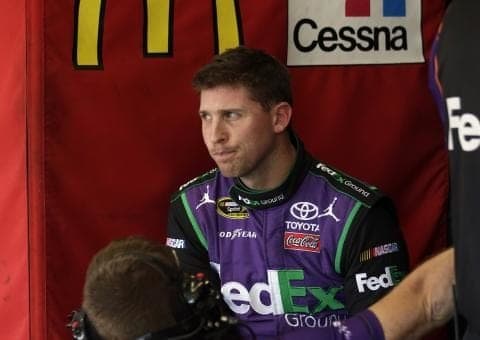 Race No. 1 of the Chase is finished, but now you have to wonder if the pushing and shoving, on and off the track, is not. My guess here is an emphatic no, and I would say that’s an expected and good thing. There will be some intense moments as the races become more and more important. It’s just part of the Chase scene now.

You can’t do much better than Denny Hamlin. Sunday’s win automatically puts him in the next round of Chase. Hamlin’s day went from bad, with an early spin, to decent with getting back on the lead lap, to pretty good with getting back in the top 10, to as good as it can get with a late caution that aided him to victory. He also got a key call from crew chief Dave Rogers to stay out on that last caution, which put Hamlin in third place on the restart and into first place before the first green-flag lap was completed. Now the pressure is off for Hamlin, for at least a couple of weeks.

There has been plenty of debate as to who was right or wrong in the Kevin Harvick–Jimmie Johnson in-race and post-race incidents. So here’s an answer to clear it all up: they both were right and wrong. Johnson got a big push on that restart from Joey Logano. If he had just kept going straight he would have bumped Harvick out of the way and potentially causing a multi-car wreck. So, he went low to avoid that. Johnson, too, wasn’t going to fast enough to pass Harvick and you can’t expect Harvick to slow down and let Johnson in there. I’m not sure what else Johnson could have done, but since he chose to side bump Harvick to get back on the track, well, you can’t blame Harvick for being upset about that as the result was a cut tire and a badly damaged car. Then, post-race, Johnson should have known that Harvick was probably still pretty upset, with Harvick’s Chase chances taking such a big hit. So to expect Harvick to step out of his RV and play nice, well, we all know that wasn’t going to happen. All in all, it won’t mean anything to the Stewart-Haas Racing /Hendrick Motorsports alliance. But it made for good TV for a few minutes.

Kurt Busch seemed to have it all wrapped up when the late caution unraveled everything for the No. 41 team. The third-place finish was far from a disaster for Busch, but it can be tough to take when you appear to have a victory all but secured. And, you have to note that at Chicagoland, and also at Darlington, that the late cautions led to wins for Joe Gibbs Racing drivers (just a side note for you conspiracy theorists out there). At any rate, Busch showed that he could be really good again when it matters most. Don’t expect him to go away during the Chase. If he just keeps his cool, and he has done that this season, he may well be one of the Championship Four at Homestead.

So we hadn’t heard much about Ryan Newman all day as he was spending time in the top 15, but not really appearing to be much of a factor. But besides Hamlin, the late yellow also appeared to help him. He ended up with a fourth-place finish and now heads to New Hampshire next week, which has traditionally been one of his best tracks. I’m certainly one of those who is guilty of overlooking Newman when it comes to his title hopes, but he is a plugger and that’s a good thing. He and his team just try to get a little better all the way through the race and the next thing you know, they’ve plugged their to a top five finish.

Jeff Gordon had a very good car almost all day, and even pulled away from the field on a restart midway through this one and led 41 laps in all Sunday. But along with Hamlin and Busch, he decided to not come in for tires on the final pit stop and then just found himself hanging on in the final five laps. He went from second to 14th in those laps, and instead of a day where the No. 24 team comes out feeling pretty good about itself, now the team will be left asking a lot of questions about what it can do better in those closing laps at New Hampshire.

While Gordon was a factor and ran up front late in this race, the same could not be said for fellow Chasers Paul Menard, Clint Bowyer and Jamie McMurray. None of those drivers have been able to win a race this year and they also had another thing in common Sunday: They each finished at least one lap down and were 16th or worse. For them to have a chance to get into the next rounds of the Chase, they will need to take a page from Newman’s book.

Temper tantrums aside, the realty for Harvick’s defending champion team is that it is now in a big hole. After the on-track incident with Johnson, when Harvick was running up front, he came out of the garage area 58 laps down and now he is 22 points out of the final Chase spot. Harvick had an amazingly consistent season which included two wins, but that last win came in the third race of the season. Now, he almost will have to win either at New Hampshire or Dover to make it to the next round, something that is entirely possible with this team.

For years it was a NASCAR rule that if qualifying was rained out, the field was set by the points standings. Then it went to a rain-out rule of going by the speeds of the first practice to set the field. Now, it needs to go one step farther. And yes, if you want, you can even call it the Ryan Blaney Rule. The driver of the No. 21 was in the top 10 in practice speeds on Friday, but due to the lack of starts this season, he was not in the field Sunday. So, here’s what needs to change: If a driver is in the top 15 in practice speeds, which shows the car clearly deserves to be in the field, the driver should be allowed in the field regardless of how many starts he or she has had. That way fans are guaranteed to see the fastest cars start the field each week, instead of having to watch the usual back-markers.

I know the narrative is Logano was involved in that melee, but he really wasn’t . Yes he bumped Johnson to get the show going, Jimmie wiggled, corrected quickly and went about his business on the apron which was totally legal, he moved up or Harvick moved down and then the controversy started. Logano was a few car lengths behind. Kinda silly. The two are Cup champs (at least part of the season and one race..:) and know what they needed to do. Harvick and company chose to stay out, gamble and lost and that is that. Jimmie screaming on the radio “I can’t believe the 22 did that” was classic Jimmie, deflection and blalme. Did Joey do a Vulcan mind melt to Jimmie or Harvick or was he driving his car? Just asking. Please, why can’t two Chevy drivers do the deed themselves without blaming another party? It seems it was a racing deal and that’s that. That is what my eyes saw anyways.

Why don’t they make the Ryan Blaney rule “If you qualify fast enough you get to race?”

And I think you mean “due to.”

Yes, Blaney is competitive and much faster than the others that get in by charity. Too bad.