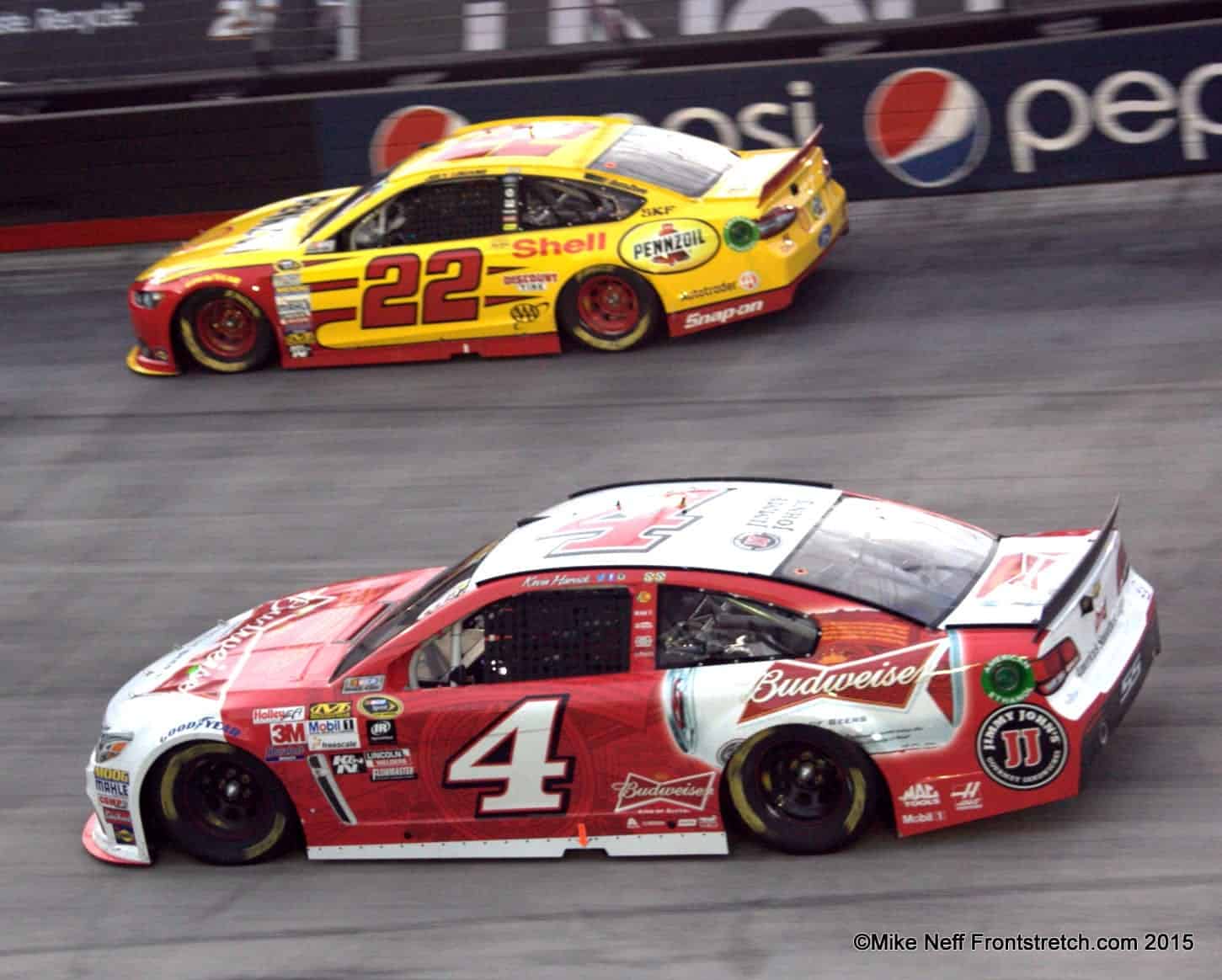 Did You Notice? Kevin Harvick’s year of “almosts” is finally catching up to him? The reigning champ’s Chase is in serious jeopardy after contact with Jimmie Johnson led to a wreck and a 42nd-place finish. The incident was clearly not Harvick’s fault; it was a case of wrong place, wrong time on a hectic restart where Johnson and Joey Logano made contact behind him. An innocent victim, he now sits dead last in the playoff standings, 22 points behind the cutoff with two races left to close the gap.

Those points won’t matter, of course if Harvick wins at either New Hampshire this Sunday or Dover the following week. But despite an incredible season, one where he’s scored 18 top-five finishes in the first 27 races, a victory at either track appears unlikely. Yes, he ran in the top three at both places the first time around this season. But Harvick has never won at Dover, a track Johnson typically dominates during the Chase, and his only career victory at New Hampshire came in 2006. Now, are chances high they’ll score top-five finishes in both events? Absolutely… but this type of deficit makes it questionable whether all those points will wind up being enough.

That’s where we turn to bonus points and the little boo boos that kept Harvick from winning so many places this year. He has a whopping 10 second-place finishes to go along with just two victories; convert all those into wins and he’s sitting on the right side of the Chase bubble with 30 extra bonus points. Even half of those second-place runs turned into wins makes Harvick’s deficit to 12th just seven points; that gap would be easily surmountable.

A lot of people say bonus points don’t matter anymore since the Chase resets everyone to zero after the first round. But look at Harvick’s situation. 1,460 laps led paces all drivers, but the “Closer” just couldn’t close the deal enough. There was the race at Kansas Johnson beat them on old tires, another close loss to Johnson at Atlanta, not able to make a move on Logano in the final laps of the Daytona 500… the list is long. Sure, Johnson’s car ultimately knocked Harvick out of the race at Chicagoland but if they can’t surmount a comeback this Stewart-Haas Racing team will have no one to blame but themselves.

Did You Notice? Jeff Gordon lost 12 spots on that final restart? So much has been said about that final caution but for the most part, other than Kurt Busch losing the victory spots gained or lost over those final few laps will have minimal impact on the Chase. Busch and Denny Hamlin were almost certain to make it through to the 12-driver field anyway based on how both have been running over the past few months (and, in Hamlin’s case, the Joe Gibbs Racing organization).

For Gordon, though driving his final season in Cup the outcome was not so certain. He started right on the top-12 bubble, without any bonus points and needed three solid runs to ensure his spot in the next round. Solidly inside the top three during Chicagoland’s stretch run, Gordon had the best run of his season in months going which would have built a cushion over 13th place in the points on back.

Instead, now Gordon sits just three points ahead and leaves the door open for him to fall out should New Hampshire and Dover bring any bad luck, mechanical failures or simply a poor run. The weird circumstances at the end of Chicagoland bring to mind the way Gordon’s Chase unfolded last November; in contention to win at Texas, a late caution combined with contact from Brad Keselowski’s No. 2 Ford cost a wounded Gordon 20 spots, a spot in the Homestead Final Four and potentially the championship. (He had the fastest car for much of that season finale). In some ways, it would be fitting if the incident knocks Gordon out in the first round during his final season; he has never won during the Chase format but would conceivably have matched Richard Petty and Dale Earnhardt’s record of seven championships if the old point system through 2003 had been kept. In 2004, ’07 and last year Gordon would have won the title going away if the point system was kept in place over 36 races.

Did You Notice? In an era of record-setting contract in other sports NASCAR’s purses have been down at select races this season? Winner Hamlin took home a shade over $306,000 for winning the race at Chicagoland Sunday. Last season, Keselowski took home just over $364,000. That’s a whopping 16% reduction, made even more surprising considering it’s the first year of NASCAR’s new, improved television contract which brought millions in increased revenue into the coffers down in Daytona Beach.

The purses are confusing enough to understand, considering a driver who finishes 42nd can make more than someone who runs 20th due to contingency prizes, sponsor bonuses, etc. But those reductions are troubling for two reasons. One, if you’re a potential owner looking to enter the sport, purses are how you build your financial backbone while accumulating sponsorship. How can you trust it’s a lucrative proposition (sports is a business, after all) when you spot a downward trend like that? Two, these independent smaller teams are using this purse money as a way to try and survive. With the costs of doing business going up and money you win going down… it doesn’t take more than a second grader to do the math on that.

No wonder why Rob Kauffman, outgoing co-owner of Michael Waltrip Racing and Chairman of the Race Team Alliance refers to the sport as a failing business model. When he’s so bitter as to suggest his former race shop should be turned into a housing development… that’s why.

And while the “incident” may not have been Harvick’s fault, it surely was the fault of Kevin and his crew to elect not to pit when there was smoke from a tire rub, whether or not it appeared to dissipate – the damage was already done.

And even though Harvick may yet pull this one out, I sure would love to see karma take this punk out, after his cocky statement that he would pound JGR. Kinda like the way he “pounded” Jimmie Johnson with his “tough man” shove.

That’s what happens when you wipe out the results of 26 out of 36 races.

Why is that logic so lost on the lover’s of this stupid format?

An “innocent victim”? Seriously? That’s racing. Blaming Logano is like getting bumped in the fast food line at MickeyD’s you get your order, promptly drop your soda and you blame the guy who bumped you before your placed your order. Pffft. Logano’s bump caused by Jr’s bump is totally irrelevant to that scenario, as the 6 time 10 race champ righted his car promptly, as he should…he is a “Champ”, right? Racing deal. And the actual damage was not done by Jimmie but the 4 Team. It wasn’t a bright idea to stay out and not come in to change tires seeing clearly there was a problem. Nope the 42 place finish vs. what could have been is clearly on the 4 Teams shoulder. Does anyone point the finer at the spotters of those two drivers? Just asking. Chevy lovers and Chevy drivers always want to go outward for blame…yes the bump happened, but it was in no way “the cause” of what happened after.

I would NEVER consider Johnson an innocent victim! He could have made a better decision but he chose to bull his way thru and back onto the track. Especially because he expects every other driver to simply yield to his majesty.

Agreed. I still don’t quite understand why Logano is the medias whipping boy. Any time he is near anything remotely controversial it always ends up being his fault. And Harvick always gets a pass for being a D-bag. And calling him the “closer” is quite funny and incredibly wrong. It was made up by DW because he came from behind a couple times to win races and for some reason the rest of the media seem to run with whatever DW’s trap spews. 10 second place finishes does not make anyone a closer.

No Tom. This incident doesn’t provide an example of why finishing 2nd so many times dooms a driver’s chance at a championship, this just shows another shortcoming of the chase/playoff system for determining a champion. When there are 43 teams on the field competing against each other at the same time, piling up a lot of 2nds over the course of 36 races should be a good thing. There are a lot of drivers with fewer wins and 2nd place finishes that are now ahead of D-bag Harvick, how’s that fair or representative of performance?
Place the blame where it belongs… the chase is an asinine method for determining a champion in this sport.

Exactly! and I also agree with what Doninajax said.

It is the chase concept which is flawed to begin with but NASCAR and BZF are hell bent on insisting that it is just wonderful.