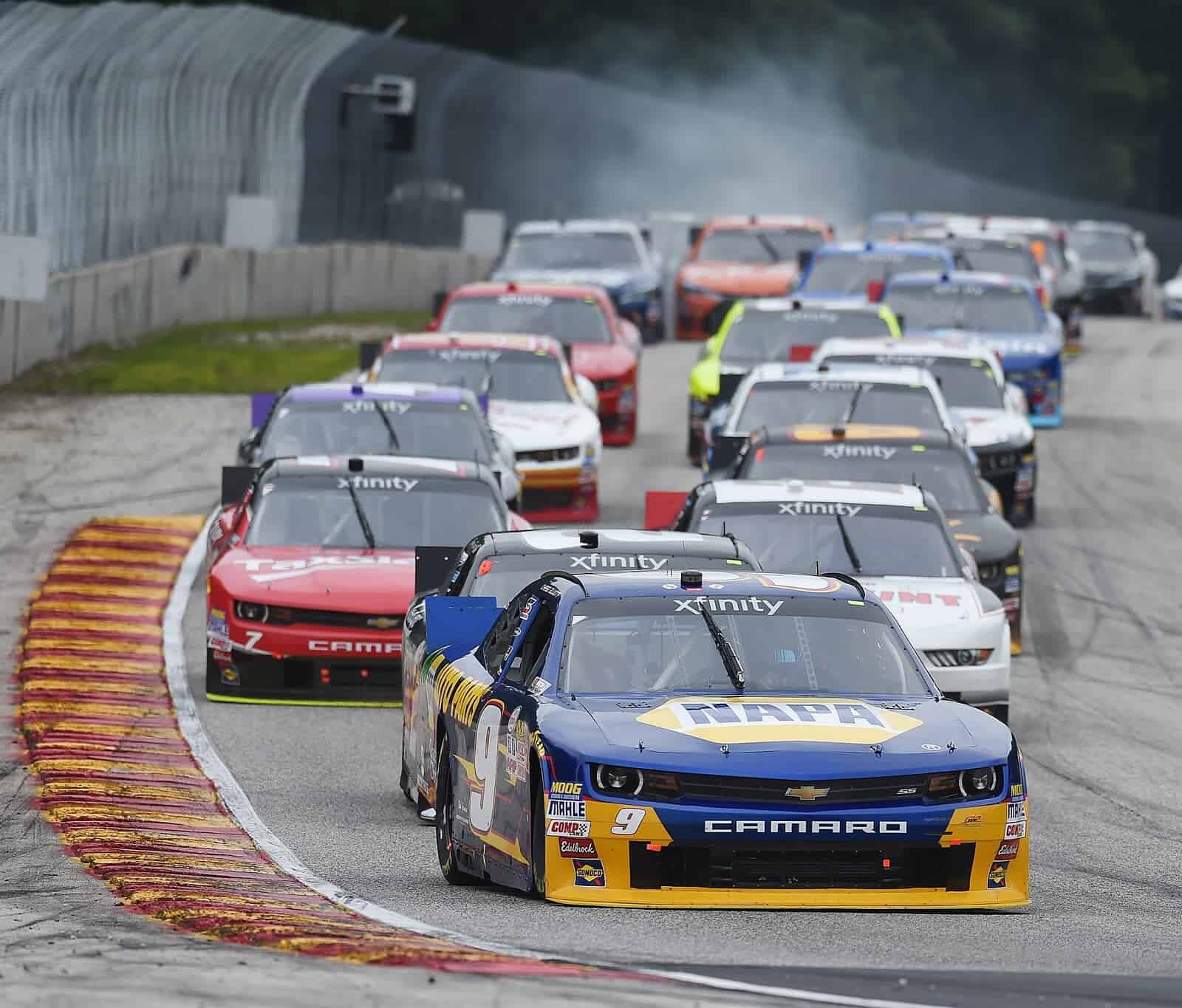 With the Chase now well under way in the Sprint Cup Series, it’s easy to lose track of the excitement and potential looming large in the other series. The Xfinity Series in particular has plenty of championship-capable drivers who are able to win races – even in events chock full of Cup Series regulars – and pose a challenge to the main contender in Chris Buescher.

Despite the fact that the grid setup in the Cup Series dwarfs most championship battles, it’s usually sold to us each week how much of a challenge Ty Dillon and Chase Elliott are trying to pose to Buescher. Elliott has won a race and Dillon is not far off, and with only seven races left, the race for the championship is on.

Except that storyline really seems oversold at this point. Buescher has a 25-point lead over Dillon and a 28-point lead over Elliott. Those certainly aren’t insurmountable numbers but the championship battle is far from a horse race.

No, I’m not about to start advocating for a Chase in the NXS and I’m not suggesting we give up on the season just because someone has a sizable lead. It’s far from over, anything can happen and I am well aware of that.

However, I have to look at the rest of the season as Buescher’s to lose. After all, with one point equaling one position, 25 points in a 43-car field only requires solid finishes on his part and Buescher is capable of doing just that based on his past performance.

Take this weekend’s race in Kentucky, for instance. When you initially look at Buescher’s results in that series, it doesn’t look so good. Only one top 10 in three races and an average finish of 12th. Kinda meh, right?

He finished 11th and 18th in the other two races. Those results aren’t great of course, but if he even finishes around those positions the rest of the season, he’ll be good to go regardless of what his closest competitors do. And it’s not out of the question to expect Buescher to finish in or around the top 10 this season, with or without Cup Series drivers in the race. He has finished in the top 10 in 16 of the 26 races. In 20 of those 26 races, he has finished 12th or better.

Clearly, Buescher’s consistency is going to make him tough to beat which might make the championship less – not more – exciting as Homestead draws ever closer.

With that said, there is a heck of a battle for second place right now and either Dillon or Elliott want to be in that position to capitalize if Buescher suddenly implodes (unlikely, but we’ll pretend).

I don’t think I’ll be alone in the fact that I would put my (completely rhetorical and hypothetical) money on Elliott. Of course the fact that he has a victory gives him an edge, but he has shown more capability of winning than Dillon, which he’ll need if he is going to beat Buescher.

I’m sure I’ve made my case. Now, of course, Dillon go could on a hot streak, pull through for a victory and leave Elliott in the dust. Stranger things have happened.

Of course, that would also mean that the even stranger concept of Buescher losing this championship has to be considered as well. Which I’m not sure I can personally go for at this point.

But that’s why we watch, right?

It’s not over yet, but the flagman is holding onto the white flag just in case.

Don’t count on this Championship being over. It’s far from it. There is a Ford driver, and Roush Ford driver at that, leading a Hendrick Chevy (I don’t care whose name is on the ownership papers of the number 9, that is a Hendrick car) and a Childress Chevy. There is no way on this earth that NASCAR will allow Buescher to continue on to win the Xfinity title. If it does get close, look for pre-race and post race inspection failures drawing heavy penalties, or outright take-outs. Buescher will not win this Championship. My money is on Elliott to repeat.

Can we PLEASE stop pretending there even is an Xfinity Champion? The poor fool that finishes 6th the most times behind the ever present Cupholes is not a Champion by any legitimate measure.

Couldn’t have said it better….and NASCAR needs to recognize the flaw in allowing the charade to continue. Just look at how many points-earning XFINITY drivers actually won a race this year. Two things–as has been suggested by another writer, Cup drivers should not be permitted to run in other series after 5 years in the premier series. I’ll add that once the Cup Chase starts, NONE of the top-16 Cup drivers should be allowed to race in any other NASCAR series, unless or until they’re eliminated in one of the Chase rounds.

While I’d like to see a repeat championship for #9, there have been too many performance issues for the team–sophomore stuff–but likely some stress on the team and distraction on the part of the driver, knowing he’s got big shoes to fill next year. In the end, I don’t really care….mainly due to the corruption of the series by the constant presence of Cup drivers.

Wait, isn’t Kyle Busch going to be the Xfinity Champion? I mean he has the most wins and top-5’s so how can he not be the Champion…oh, wait you mean this isn’t the series that he (and a few others) is committed to for points? Well that seems odd now doesn’t it. Wonder of some writer, some where would actually write about how odd that is?

You mean they don’t? Welcome to Frontstretch, where writers have been complaining about it for years. Just because you don’t see it in one specific article or in a news story doesn’t mean it hasn’t been done already; in fact, it’d be beating a dead horse by now. C’mon.

What! ! Almost as if they are afraid of NASCAR’s wrath Front stretch writers treat the lesser series like actual competition that fans watch and care about even though the numbers tell a vastly different story. I think I’d faint if I read an article titled “It’s not even racing anymore (Insert cup driver here) turns yet another Xfinity race into a farce”

I think the big question is does anyone care?

….and thus the flaw in the current situation for determining the Cup champion–while technically off-topic, some day I’d like to see the Chase become a one-man wrecking crew for someone that didn’t make the Top 16 by winning more of the Chase races (and the most races for the season) and thus nullify the whole concept. It’s an unlikely scenario, as NASCAR would likely manipulate outcomes if such a run began to develop. It makes a strong argument for discontinuing the present approach, but as a realist, I understand it’s not expected to go away any time soon. I’d much rather see a total abandonment of “points” and have average finish determine the ranking of competitors, as I believe the current system is too punitive when a poor finish or series of poor finishes knocks down an otherwise strong team/driver–witness the situation with Kyle Busch, in “on waivers” for a strong run on returning from missing a significant number of races, technically outside of the normal rules–I won’t judge whether he should be in the Chase under any circumstance, but just by missing a bunch of races, it does go against the concept of being the Champion, normally assumed/expected to be in all of the races. The same names would still be at the top of the list, most certainly, but there would be some re-ordering of those names.

As long as it isn’t going away, the Chase needs to exist in it’s own points or average finish environment, which keeps things really tight among that group, especially as the elimination process brings the Championship to it’s conclusion. That is a much more sensible and potentially “exciting” approach….at least as I think about the current system.

Even better would be to have this interloper come from the XFINITY ranks, and just make a mess of the Chase, but of course the “declared series” for points nullifies that….26 races, 10 different winners, with several drivers having up to 4 wins, and in the final 10 races, one driver NOT in the Chase, such as a Kyle Larson, who is destined to finish no better than 17th in the current Chase format, still could end up winning more than half of those 10 races (and potentially more races than any other driver in the series for the season)–it COULD happen, and I’d love it!!! That would be a championship with an asterisk…..