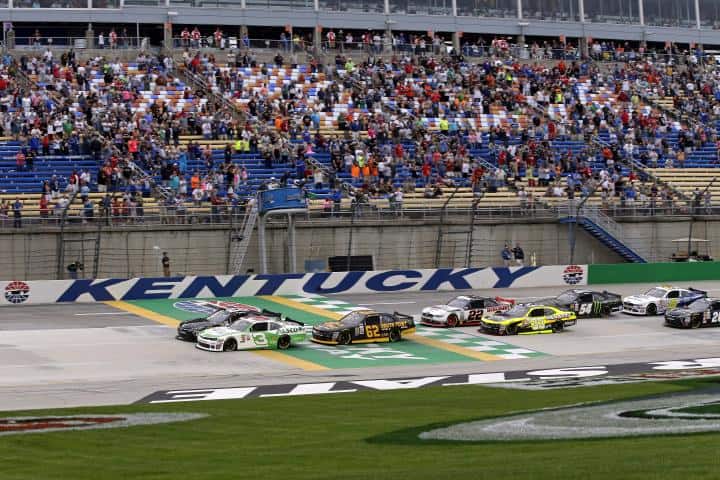 Maybe you regularly follow the NASCAR Xfinity Series. Maybe you don’t. There’s no judgment either way; these days, at its best the series is an entertaining ramp-up into the Sprint Cup Series event the following day, but there’s also the fact that it is, indeed, a warmup, the race where some of the Cup full-timers play before their big race and often win in lieu of the regulars that are gunning for a series championship. It’s far removed from the days when, yes, the Cup ringers showed up, but more of an identity was nonetheless established: as a feeder circuit, one where the rising stars of NASCAR did battle before their eventual call-up to the big leagues.

There are times, albeit brief and fleeting, when the old feel of the Xfinity Series holds true. And this weekend is the last time you’ll see it all season.

The series travels to Kentucky Speedway this weekend for the second of two races at the track this season, a standalone event as the Sprint Cup and Camping World Truck series occupy New Hampshire Motor Speedway on Saturday and Sunday. It’s the final time this will happen all year. For the remaining six races following Kentucky, the Xfinity Series will compete as a companion race to its superior division before the season wraps up.

Standalone races are oftentimes the best both the Xfinity and Truck series have to offer. As long as the Cup Series drivers are indisposed elsewhere, they yield some of the best chances series regulars have to contend for a win all year, and they also offer opportunities for major teams whose seats are often taken by Cup veterans to slot in intriguing entrants, whether they’re journeyman drivers or promising up-and-comers. You might even see a series debut or two, perhaps witnessing the dawning of a new superstar career in NASCAR in the process.

That’s not to say these things can’t happen during companion events, it’s just that they often don’t. With standalones, you know that even if the race ends up subpar, at least it wasn’t Kyle Busch leading virtually every lap again to make it so. At least a win occurred that either has championship implications or came from the steering wheel of a young gun or part-time veteran. Less sour grapes.

The entry list is understandably solid for the VisitMyrtleBeach.com 300 on Saturday night. Busch’s No. 54 is filled by Erik Jones, who’s flying in after the Truck Series race at New Hampshire (and if he doesn’t make it, Drew Herring gets the nod as Joe Gibbs Racing’s de facto I’m-just-here-to-practice driver). JR Motorsports’ No. 88 has Ben Rhodes, a youngster with frankly a bit to prove after just two top 10s in seven starts. The No. 22 of Team Penske fields Ryan Blaney, less interesting but still a welcome presence since the dude still doesn’t even run full time anywhere. Richard Childress Racing’s No. 33 tries out Brandon Jones, who’s scored one top 10 in four starts this year.

Then there’s Gibbs’s No. 20, which yields the first-timer: Matt Tifft, part-time racer for Kyle Busch Motorsports in the Truck Series, making his Xfinity debut. Tifft has scrounged up five top 10s in 12 Truck Series starts and has an impressive slate of ARCA Racing Series stats, too (nine top fives, 13 top 10s in 20 starts). The 19-year-old is one to watch – maybe not as a potential race winner, but hey, gotta start somewhere.

The nuggets continue: Ryan Truex makes his second start of the season behind the wheel of Biagi-DenBeste’s No. 98. Brennan Poole subs again in the No. 42. Former Turner Scott Motorsports full-timer Dylan Kwasniewski is back with Obaika Racing. Dylan Lupton pilots the No. 25 for what may be the last time this year.

And then there are the usuals. Chris Buescher is out here vying for a title, and the Roush Fenway Racing driver still has a 25-point cushion on Ty Dillon. Future Cup driver Chase Elliott is nearby, too, while Regan Smith and Ryan Reed are among the regulars who have actually won a race in 2015. For drivers like Dillon, Elliott Sadler, Darrell Wallace Jr., Daniel Suarez and more, this could be their last big shot to visit Victory Lane – at the very least, it’s the last with just themselves to contend with. Even if some of the remaining companion events end up having fluctuating amounts of Cup drivers in the field, they’re all certain to have at least one or two.

Complain about the complaining if you want, but know this: On Saturday, 40 drivers will take the green flag in Sparta, Kentucky. None of them are full-time drivers in the Sprint Cup Series. No matter who wins, it’ll come from either a series regular or an up-and-coming NASCAR star. It’s not too often we get to see that these days, and it’ll certainly be the last for the series until… well, though we don’t know the 2016 schedule yet, chances are it’ll already be getting warm again by that time.

Do what you gotta do, but as long as nothing comes up, I know where I’ll be Saturday night.

It’s just a shame we even need to have this conversation.

Doesn’t matter that the cup drivers aren’t there, the cup lite teams are. The winner will come from that group.