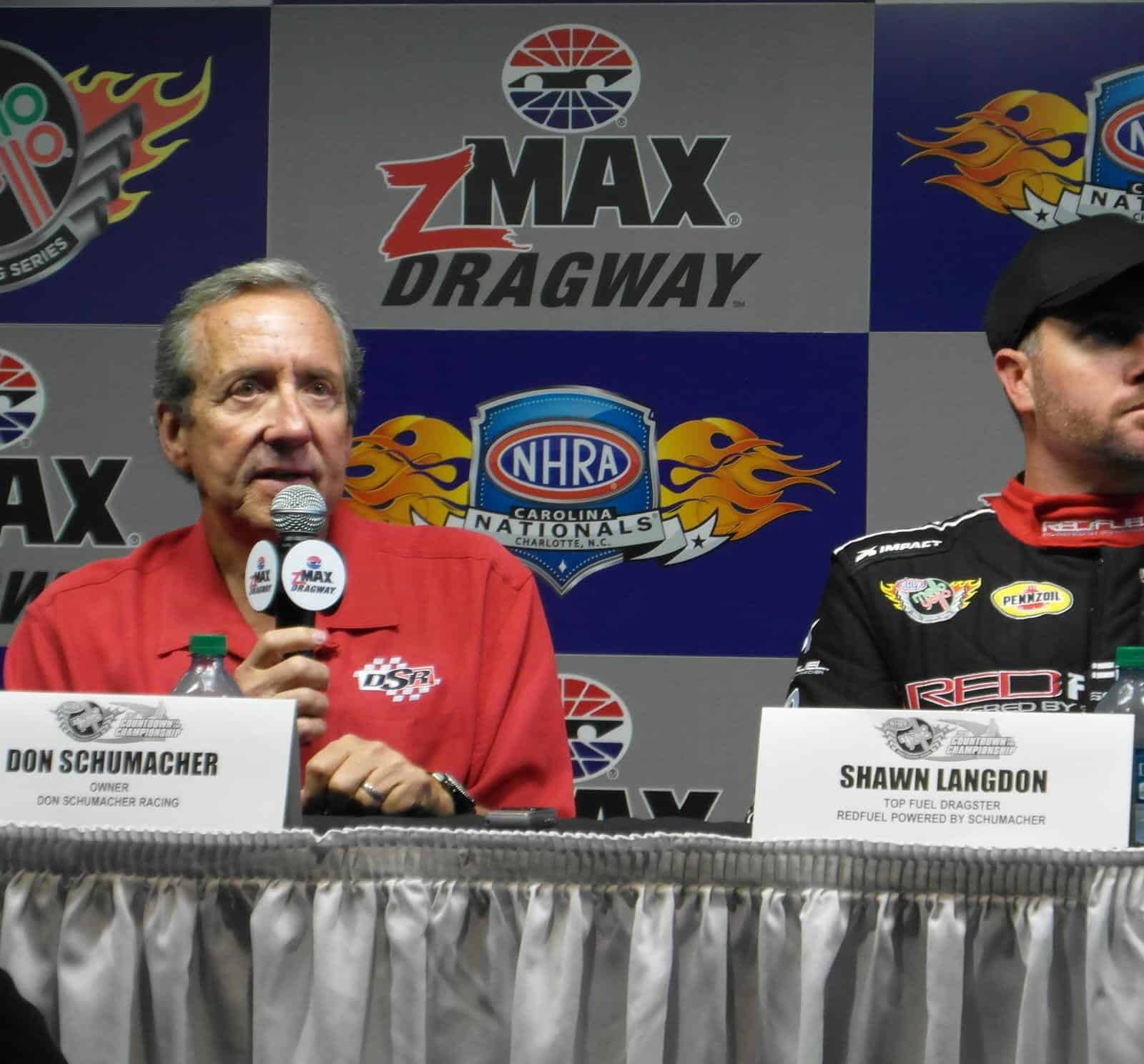 Here’s how it shakes out in case you’ve missed it: Just prior to the U.S. Nationals, Don Schumacher Racing parted ways with driver Spencer Massey. Last week, sponsorless Alan Johnson Racing announced they would not run the remaining races in 2015. The next day, a deal was announced that put AJR driver Shawn Langdon in the seat of DSR’s car for the rest of the season in order to pursue the championship.

To back up and give a little history, once upon a time Alan Johnson worked for Don Schumacher as a crew chief and they did great things together. Then Johnson went out on his own and there were some who thought this split to be contentious, something that Schumacher denies. Mostly.

“Alan and I had an understanding that if he was going to be able to form his own team, that he was going to leave the Army team,” said Schumacher. “I was never unhappy about it. Losing all of the guys on the team except for one crew member, that certainly did bother me, but business is business out here.”

The fact of the matter is this arrangement is the best situation for everyone. “The championship is the ultimate goal. That’s why we come out here and do what we do, to run for the championship,” said Langdon. This arrangement allows both Langdon and DSR’s Red Fuel team to do that. It was, however, highly stressed that Langdon remains under contract with AJR and is only “on loan” to DSR.

That means that Schumacher gets one of the best drivers in the sport, but only for six races. During those six races, Langdon will function as a full member of the team just like the rest of the DSR drivers. When those six races are complete, he will return to the rival AJR. Probably.

“We will see what transpires there,” said Schumacher. “First Alan’s got to find a sponsor to go on next year. Anything can develop. I’d hate to have him leave my camp because he’s one of the best drivers out here, but he’s also on loan to me from Alan Johson. He’s under contract to Alan Johnson. That was understood when we put the deal together so if he leaves, he leaves and goes back into an Alan Johnson car. I’d love to have an Alan Johnson car out here with Shawn driving it and beat them into the ground.”

As for Langdon, all this talk of being on loan and having to give him back, might make a guy feel more like a commodity than a person, but he really doesn’t care.

Meanwhile, not one to sit on the sidelines, this week it was announced that Alan Johnson would help out Steve Torrence’s team as a consultant for the rest of the year.

“I’m looking forward to working with [crew chief] Richard Hogan and the team he’s assembled,” Johnson said. “Steve Torrence Racing is a great customer of AJPE (Alan Johnson Performance Engineering), and I think we can work together to get the Capco Contractors dragster back into the winner’s circle and make a run at the Mello Yello championship. Our arrangement only covers the last five races because Alan Johnson Racing is still actively pursuing sponsorship so we can resume operation in 2016.”

So at the end of the day, this deal will put Johnson in direct competition with his own driver. What an interesting series of events!

* NHRA announced a change to the penalties levied to Nitro teams for oildowns on race weekends on Tuesday. Penalties will now be capped at $3,000, with the first violation being $1,000, second at $2,000 and third and after at $3,000 instead of the previous system which continued to escalate the amount for third violation and after. This change will be in effect until further notice. The NHRA will also work with the teams, manufacturers and others in the sport to continue to improve the situation.

“We’ve seen a decrease in oildowns this year and we want to thank the teams for making that happen,” said NHRA president Peter Clifford. “Oildowns hurt our sport, and we realize no competitor wants to oil down the race track. We have a commitment from teams to address the oildown situation and improve it.”

The move comes after harsh criticism from driver/team owner Terry McMillen, who had an oildown in Charlotte, his fifth of the season and second in two races. The last two penalties added up to $14,000 a significant amount for McMillen’s self-owned operation. “We do have to evaluate where we are at,” said McMillen on Sunday. “I have no idea how we’re going to get to the next race… It makes the highlight reel. They’ll post it all over social media, use it on the TV show to get us to watch and fine us for it. Maybe we can get some royalties from that to help us pay for the parts we need to get to St. Louis.”

McMillen was happy with the changes announced this week however. “I think we should all thank NHRA executives for their interest in exploring alternatives and willingness to address the oildown penalties. The new policy, which includes an open line of communication between all crew chiefs and the Safety Safari should prove to further reduce oil downs and more importantly for us, reduce the kind of explosions that stress team budgets.”

“I’m humbled and grateful that everyone at Transportation Impact thought enough of what we’re doing to come on board and give us some tremendous support,” Freeman said. “Since Erica joined us a year and a half ago, we’ve won the championship, we’ve won 13 national events, including the last three in a row, been No. 1 qualifier 11 times, and put up an 89-28 race day record. That’s better than anyone in the sport and we’re proud of what we’ve accomplished.

“At the same time, we feel like we want to do so much more, and having companies like Transportation Impact lend support will help us reach all of our long-range goals.”

* U.S. Coast Guard Seaman Adam Arana is currently stationed in the St. Louis area, the next stop on the NHRA Mello Yello Drag Racing Series, and with the support of his superiors, has decided to make a family outing of it and make a one-race return to Pro Stock Motorcycle to race with father Hector and brother Hector Jr.

“I don’t have any expectations. I’m heavier than I was last season, so that’s not good for racing, obviously. I haven’t been on a bike since November 2014 and I’ve barely watched any drag racing because I’ve been so busy,” said Arana. “I am doing it for fun. I don’t have to worry about points or anything like that, and I’m just doing it to have fun and see all my friends and family again.”

Some things most people don’t know about Chad: Is only in his third year driving a Funny Car but has been involved in racing for over 20 years. Served as director of racing operations for Al-Anabi Racing. Has worked for Darrell Gwynn and John Force Racing. He has also worked for NHRA and for IndyCar.

Given the news about oildowns this week, perhaps it’s fitting to get a little more info about the oil systems in the Nitro Cars. Robert Hight can help with that as he explains how the oil system in a Funny Car works.

Congratulations again to Cathy Rossi and Kelly Burton who spent the day with DSR last Saturday at zMAX Dragway for the Carolina Nationals. It couldn’t have been more perfect. Cathy and her son met her favorite driver, Ron Capps, while Kelly and her family, huge Matt Hagan fans, got to meet Matt. Both winners enjoyed a VIP experience with team hospitality and took home some cool autographed swag too.

The career win total of Pro Stock driver Enders-Stevens after scoring the victory last weekend at the Carolina Nationals. This breaks the win total tie she was in with Shirley Muldowney and puts her in second behind Angelle Sampey for most wins by a female driver. It was also her seventh win of the season, tying Sampey’s record for most wins in a single season by a female.

The Countdown to the Championship is underway and it’s not about to let up now. It’s off to St. Louis for the second stop on the six-race championship tour. Tune in Sunday night for all the action. Things are starting to take shape.