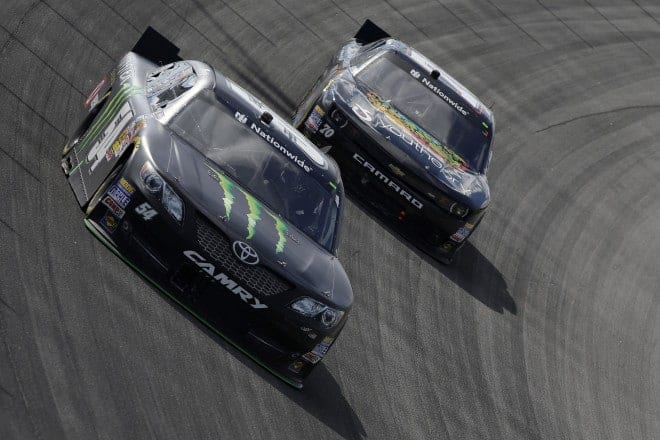 He may not get many chances to race, but Drew Herring has made the most of limited opportunities to practice and qualify for Joe Gibbs Racing.

Herring overcame an early slide to set a fast time of 30.689 seconds to top a rain-shortened practice session for the NASCAR Xfinity Series VisitMyrtleBeach.com 300 at Kentucky Speedway. Herring, 28, is practicing and qualifying the No. 54 Monster Energy Toyota for JGR. Erik Jones will fly to Kentucky and compete in the machine tomorrow evening after competing at New Hampshire Motor Speedway earlier in the day.

Ryan Blaney wheeled the No. 22 Discount Tire Ford to second-fastest on the charts for Team Penske, with a time of 30.741 seconds. Blaney is looking for his second NXS victory of the season at a track he conquered in 2013.

Daniel Suarez ended the session in third after dropping a 30.753-second circuit at the Sparta, Ky. track. Suarez has one previous NXS start at the 1.5-mile facility, coming in July.

The Xfinity Series will return to action on Saturday at 4:45 p.m. ET for Coors Light Pole Qualifying.