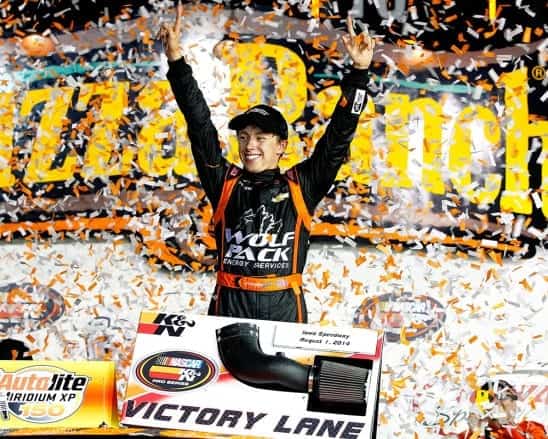 18-year-old Brandon Jones has spent much of 2015 sharing a NASCAR Xfinity Series ride with Austin Dillon and Paul Menard.

Next season, he won’t have to worry about sharing.

Jones, a native of Atlanta, Ga., will compete full-time with Richard Childress Racing in the NXS in 2016, RCR confirmed in a press release.

A racing journeyman, Jones has made four starts in the NXS this season, earning a career-best eight-place finish in his debut at Iowa Speedway. Jones has also competed in the NASCAR Camping World Truck Series, where he earned a best finish of fourth, while also adding events in the ARCA Racing Series and NASCAR K&N Pro Series East.

Jones, who made history in ARCA last season as he became the first driver to win in his first two starts at Winchester and Indianapolis, will compete in his final NXS event of the season at Kentucky Speedway on Sept. 26.

“Brandon’s performance in his limited schedule with RCR this season has been very impressive,” said Richard Childress, Chairman and Chief Executive Officer of RCR in a release. “We’re thrilled to provide him an opportunity in 2016 to showcase his talents over an entire Xfinity Series season.”

“I’m honored to have the opportunity to drive for RCR on a full-time basis in 2016,” said Jones. “I’ve learned a lot working with the RCR organization and the No. 33 Xfinity Series team in 2015 and look forward to continuing my development, contribute to RCR’s success and produce positive results for all of my sponsors and fans. I’m excited to see what the 2016 season holds for me and our team. I look forward to setting my goals higher for the season because of the support from RCR, ECR Engines and Chevrolet.”

Jones’ crew chief and team will be announced at a later date. Jones has worked with crew chiefs Nick Harrison and Danny Stockman in his limited starts this season.