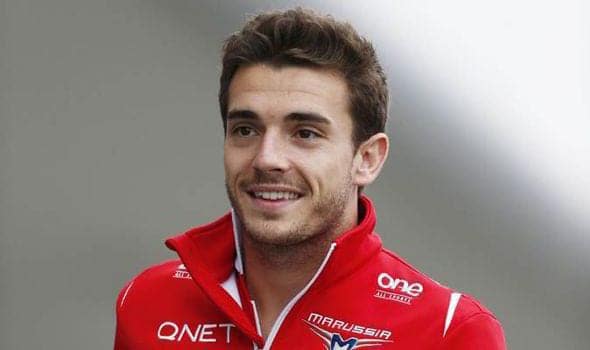 Formula 1 is on the second half of rare back-to-back race weekends, following the Singapore GP with another in the Pacific region as the series heads to Japan. A bit of a pall hovers over the event, as the track, Suzuka, is where Jules Bianchi suffered the accident that put him in a coma and ultimately led to his death. The drivers are all aware of this aspect, and the fans have already begun showing their feelings with memorials around the track.

Almost fittingly, rain soaked the track for the first two practices. While the forecast for the race is supposed to be a sunny one, the wet track was the big element in Bianchi skidding off and crashing into a crane… a crane that had been in the process of removing another car that had slid off in the same area. One of the big improvements this time around is improved drainage in the hopes that incidents like the one last year will not reoccur.

Perhaps, if you believe in otherworldly things at play, the weather is working a mood cycle for the weekend. Rainy and grey to start, but a sunny conclusion, allowing drivers, teams, and fans to be sent off with a better emotional disposition after dealing with the lingering spector of the dangers of the sport.

The rain caused many teams to forego spending much time on the track, and it almost seemed as though the drivers took laps just to honor the crowd who were present. While Valterri Bottas may have held off, in a strategic move to save his rain tyres should they be needed, Fernando Alonso made sure to get out in the second practice after the team swapped out engine components in his McLaren-Honda, surely in a nod to the home crowd.

Of course, the data gathered from running in the rain is tantamount to useless, as Lewis Hamilton stated. But maybe just getting cars on the track was the key, almost in a nod to reassurance to everyone involved.

Suzuka came into existence in 1962, basically as a test track for Honda. Beginning in 1963, it began hosting grand prix, but has done so in a somewhat inconsistent fashion, alternating with the Fuji track at times, and the Japanese Grand Prix being left off the schedule altogether at others. Since 2009, however, the race has stayed at Suzuka, an 18-turn, 3.6-mile track.  Hamilton is the defending race winner, and also won in 2007, but Sebastian Vettel has four wins to his credit. One thing to note is the elevation changes, which adds to the difficulties in cornering.

USA in F1 is something I will really get behind. Thank you Haas for stepping up and taking this country to the world stage of racing. Now if we could only get Chevy or Ford power under the cowling and Kyle Larson behind the wheel. I’m already a fan of Grosjean, he’s always seemed to be able to out perform whoever his teammate is at the time. Now I’d like to know what color and paint scheme we’ll have.

Even though evidence suggests that Singapore was a one off, the gap between Mercedes and Ferrari does appear to have closed.
As far as Ferrari supplying Red Bull with engines next year, would they want to? Red Bull’s constant attacks on Renault’s engines this year, btw: the same company that supplied the engines when they were winning four championships in a row, are bound to have raised warning flags with other suppliers. And since Ferrari is committed to Haas next year what about Manor?
That plucky little team, rescued from bankruptcy has been soldiering on with 2014 spec Ferrari engines all year. Assuming they can continue into next year what engines will they have in the back?
And McLaren- Honda hasn’t exactly been a raging success story this year either.
Nowhere else but F1 do you see this kind of drama.