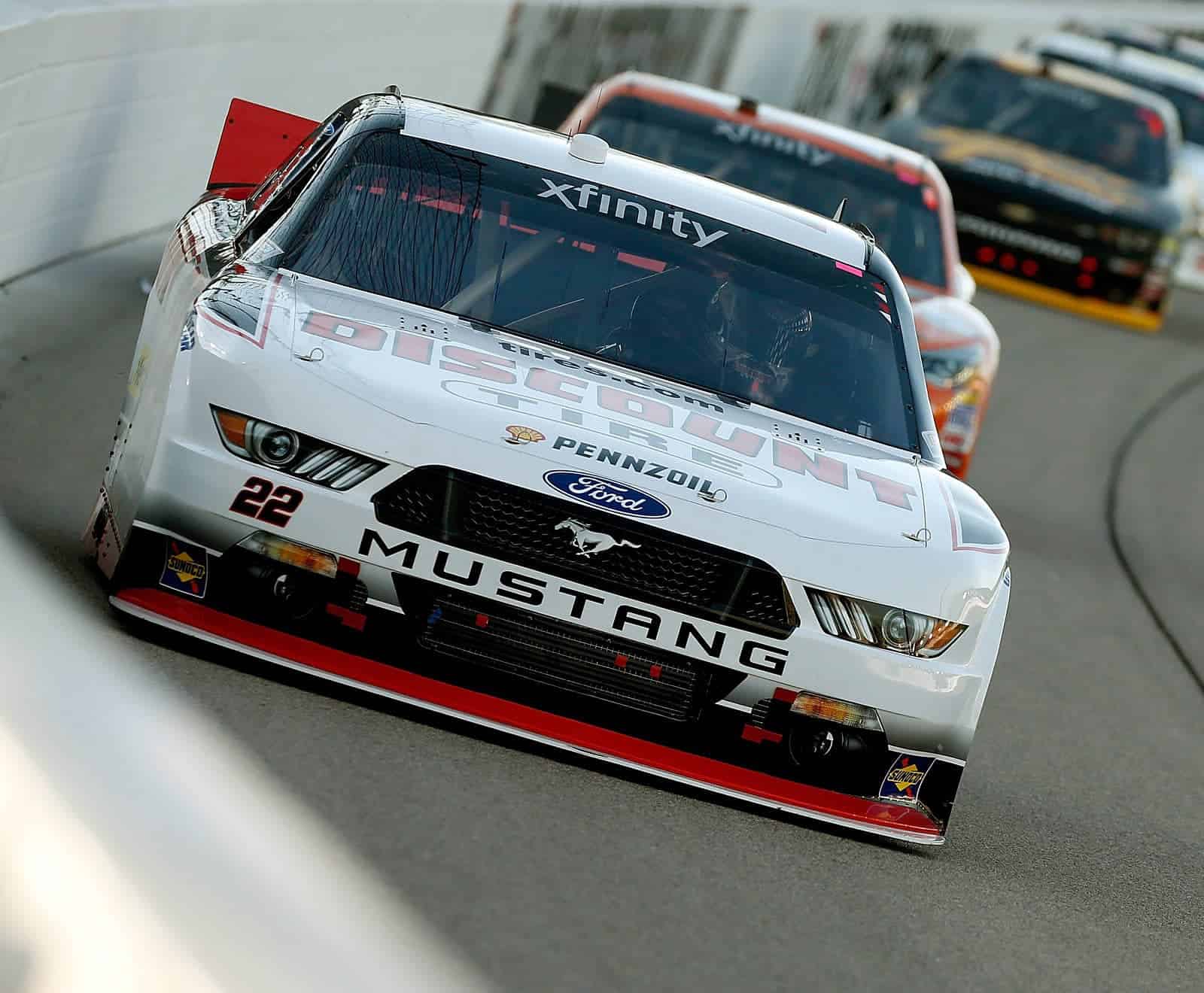 On the penultimate restart of the NASCAR Xfinity Series’ final standalone race of 2015, Ryan Blaney appeared to give away a victory. When another late caution gave Blaney an opportunity for retribution, he made sure to capitalize.

Blaney used a push from Regan Smith to pass Ty Dillon on a green-white-checkered restart and win the VisitMyrtleBeach.com 300, his second NXS victory of 2015.

Blaney earned the victory after dominating the second-half of the 200-lap event. The 21-year-old driver led a race-high 81 laps in the No. 22 Discount Tire Ford, working his way through the field as different pit strategies unfolded to stay in contention.

Blaney’s fortune came at the expense of Richard Childress Racing’s Dillon. The Welcome, N.C. native took the lead from Blaney on a restart with eight laps remaining and appeared to be cruising to a victory when the caution flag fell for Jeremy Clements’s spin with four to go.

Dillon led the field to green on the ensuing restart, but Blaney would surge into the point with significant help from Smith going into turn 1.

Dillon would come home in second, with Smith ending the night in third.

Chase Elliott finished a quiet fourth after running as high as second on the night. Fresh off of an announced full-season 2016 contract announcement, Brandon Jones took advantage of fresher tires to drive from the back of the pack to fifth and lead RCR.

Buescher, who entered Saturday’s race with a 25-point advantage over Dillon in the championship standings, ran outside of the top 10 for most of the night as he struggled with the handling of his No. 60 Advocare Ford. The Roush Fenway Racing driver worked his way through the field during the late-race restarts to salvage a top-10 and leave Sparta, Ky. with a 19-point lead.

The second NXS race at the 1.5-mile Kentucky oval could be characterized as a tale of two halves. Following a fairly standard opening 100 laps, the second half of the 300-mile race began with a lengthy red flag as a crash between Brennan Poole and Harrison Rhodes drenched turns 1 and 2 with oil.

When the race finally resumed, the only consistent factor to appear would be more cautions. The field struggled with restarts, thrilling fans with four- and five-wide moves but also bouncing off of each other to produce a myriad of crashes. Rain also made an appearance on a cool, fall evening, prolonging one of the race’s record-tying 10 cautions.

Brian Scott appeared to be a contender in the middle stages of the race, leading 45 laps before losing the position on a lap 105 restart. Scott would fade through the field, dropping back to 13th after a difficult battle with Wallace on the race’s final restart.

Throughout the wild evening, Blaney kept his cool to snag his fourth-career NXS victory and increase Team Penske’s lead in the championship owner points standings. Joe Gibbs Racing maintains the second position in owner points after Jones’s eighth-place run in the No. 54 Toyota.

The Xfinity Series will return to action on Oct. 3 for the Hisense 200 at Dover International Speedway.