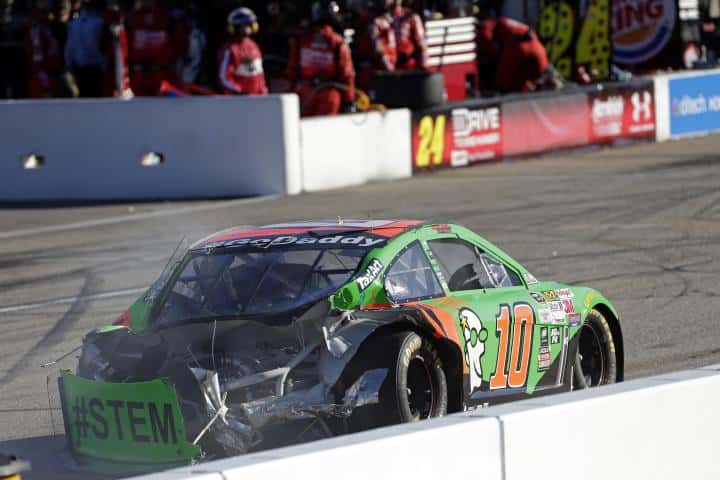 In the midst of a terrible season, small gains are something to hang your hat on, and for three-time Cup champion Tony Stewart, any small gain is worth a small measure of relief. Stewart finished 11th on Sunday, posting his best run since Pocono in August, despite bringing out an early caution when he blew a tire and got into the wall. With reports of his retirement following the 2016 season (you have to wonder if he considered hanging ’em up sooner but waited a year so as not to steal Jeff Gordon‘s thunder), Stewart may only have a handful of chances to show fans the driver he really is, and has always been. Derailed by injury and tragedy, Stewart has been a formidable competitor throughout his NASCAR career. He’s a certain Hall of Famer, and his titles in both NASCAR and IndyCar alongside his USAC Triple Crown make Stewart a racing legend with few peers. It wasn’t long ago that finishing 11th wouldn’t be anything to celebrate, but now it provides hop to Stewart’s fans that he’ll show his old brilliance a time or two before he’s done.

On thing that has always been true is that it’s hard to pass at Loudon. Part of that is the cars, with their aerodynamic dependency, but part of it is also that the track is fast and narrow with tight, flat corners, which means that it’s the kind of track where passing should be hard. While things weren’t always too close up front, the radio broadcast made it sound like they were racing at a short track at times, with spotters fairly busy throughout the event. If NASCAR does adopt a low-downforce package next year for the intermediates, that would leave Loudon to run this year’s package. If they run it everywhere, or at tracks a mile and over, it could make a difference. But some tracks are just difficult… and they should be, because they allow the best to shine.

Another thing that had everyone scratching their heads was NASCAR’s call to penalize Brad Keselowski for jumping a late-race restart. The controversy wasn’t because the call was incorrect… telemetry showed that Keselowski picked up the gas before leader Greg Biffle did. The issue is that there were two problems with the way NASCAR handled it. First, they need to look at how they review restarts… the right way to go about it is how many local tracks do: immediately throw a caution, review the start, warn Keselowski not to do it again, and restart a second time. If he’d have jumped again, flag it again and then penalize. But the review should not have taken place under a green flag. Also, if the driver who jumps gives the spot back, as Keselowski did, that should suffice. But the second, and bigger issue at play, was that NASCAR failed to penalize Gordon last week at Chicago as well as both Matt Kenseth and Kyle Busch at Richmond two weeks ago. So while the call was correct, because NASCAR missed it three times in two weeks, it reeked of favoritism to many fans. The sanctioning body already has a reputation for letting things slide with certain teams and has for many years, and blowing some calls but not others really doesn’t help.

Carl Edwards had a strong car, though like everyone else, he wasn’t fast enough to outrun Kevin Harvick, leading just 19 laps. A pit-road mistake, where the fuel man lost his grip on the gas can and it was dragged just over the line into the next box by Edwards’s car, could have been a much bigger problem for the team, but by the end of the day, Edwards was back in contention for a top finish, and he got one, coming home fifth, keeping him third in points behind teammates Kenseth and Denny Hamlin.

Joey Logano never led a single lap on Sunday, a far cry from a year ago when he led 73 laps en route to the win. What he did do was run a smart, clean race, capitalizing on late fuel gambles by a few others. Logano finished a quietly strong third on Sunday, which vaulted him two spots to fourth in points. He’s looking good headed to Dover.

There were a lot of problems during the race for Chase and non-Chase teams alike, though most were single-car issues. From Landon Cassill leaking power steering fluid, Aric Almirola and Tony Stewart in wall with flat tire, followed by Busch, to Jimmie Johnson‘s flat and Danica Patrick‘s spin and contact with David Ragan, Justin Allgaier‘s crash and the fuel woes three Chasers suffered through, it was a drama-filled event. But none of this was anything atypical for Loudon.

So who really dropped the ball for fans this week? How about NBC Sports Network? Sure, they covered the Chase, but they weren’t so good at covering the race. Biffle, who had his first top five in eight weeks, finishing fourth, was ignored on the post-race show. Allgaier was having a stellar run, running as high as 11th at one point with nary a word from the booth until a blown tire put him in the wall. Ditto Sam Hornish Jr., who was inside the top 10 briefly. Sure, the Chase is important, but the network’s job is to cover the event, not just the championship. That’s Journalism 101 stuff, and the network was shamefully bad at it this week.

Let’s be realistic: Kenseth wasn’t going to catch Harvick in the closing laps if Harvick hadn’t run short on Sunoco. But Harvick’s team rolled the dice, while Kenseth’s played it safe, and as it turned out, safety made Kenseth finish first, giving him the point lead in the process. Harvick, meanwhile, needs a miracle in the form of a win at Dover, a track he’s had little success in conquering. His glimmer of hope is that his best finish at the Monster Mile (second) came just this spring. Kenseth, on the other hand, is sitting pretty until the next round starts in two weeks at Charlotte, and has made himself into a solid candidate to win his second career title in a few weeks.

Martin Truex Jr.; Furniture Row Racing: It wasn’t Truex’s best run of the season. He didn’t have a top-10 car, but he had a top-15 car and put himself in solid position to capitalize when three cars within the top 10 ran out of fuel. That moved Truex up from 11th to eighth. Was it the kind of race that will win Truex a title come Homestead? No, but it’s the kind of race that will keep him in contention until Homestead if he can keep on doing it. Truex gained two spots in points this week to move into ninth, a spot where his consistency should keep him in the game for another month. And with the team going to Toyota for 2016, with the possibility of some type of alliance with Joe Gibbs Racing, the future looks pretty bright. You probably won’t see this team on the small teams list next year as they have earned a spot among the elite.

Casey Mears; Germain Racing: Mears had a top-20 car… until he didn’t. The driver was less than thrilled with the handling of his car early, but was able to maintain his position and the team made changes to improve it. Mears dropped back to 27th after a pit-road jack issue and a penalty for an uncontrolled tire, and after that said he felt like something had changed and the changes the team had made were no longer helping. Mears was able to drive back to 18th for the finish. Despite some terrible luck in recent weeks, the team has made gains, posting back-to-back top-20 runs for the first time since Daytona and the first Loudon race this summer.

AJ Allmendinger; JTG Daugherty Racing: Allmendinger’s day did not start off the way he wanted it, and it really didn’t get a whole lot better, though he was able to make gains at the end to finish a hard-fought 23rd. At one point, Allmendinger told his crew that the tires were chattering so hard he was having a hard time holding the steering wheel. Despite the ill-handling car, allmendinger drive a steady race, and it was good enough to keep him within shouting distance of Mears in the point standings as well.