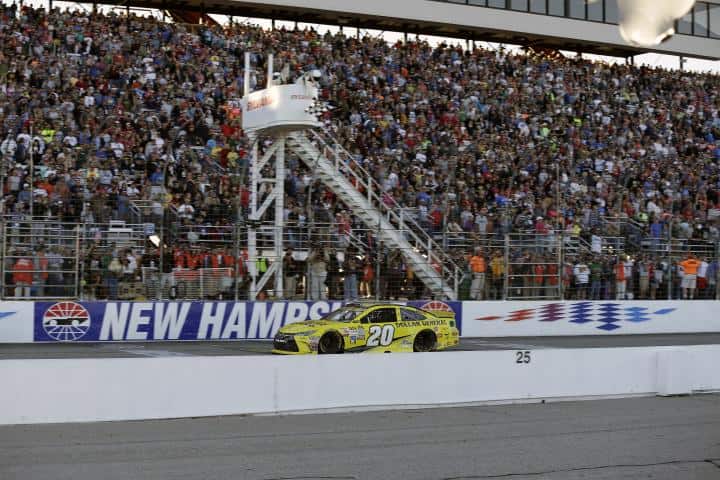 Who’s in the headline – The headlines are crowded after Loudon, but Matt Kenseth gets the bold print. Kevin Harvick tried to stretch fuel but came up two laps short and Brad Keselowski was penalized for jumping a restart, which took him out of contention for the win. Kenseth was the driver who conserved his equipment until it was go time, pushed Harvick hard enough for him to run out and ran away from the rest of the field for the win. The victory punches Kenseth’s ticket to round two of the Chase playoffs.

What happened – Carl Edwards started on the pole, but Harvick established very early that he was the car to beat. Harvick led from lap 20 through lap 193, except for five laps that were led by others under pit stops. The lead went through a few fingers from lap 193 until lap 252 when Harvick assumed the lead again after having pitted with 88 laps to go. Harvick attempted to save fuel, but the Joe Gibbs Racing tandem of Denny Hamlin and Kenseth pressured him and eventually he ran out of gas with 2.5 laps to go. Kenseth swept by and cruised to the win.

Why you should care – As the first round of the Chase plays down to its final race, the script is basically set for the people who want to make the cut. Jeff Gordon is in 10th and is 10 points ahead of Jamie McMurray in 11th. Gordon is all but assured of making the next round barring a disaster. That means the final two spots in the next round are up for grabs among six people. Clint Bowyer has to win or he’s out. Harvick most likely has to win unless McMurray or Dale Earnhardt Jr. has a major problem at Dover and Kyle Busch and/or Paul Menard don’t finish ahead of him by enough to make it into the next round.

What your friends are talking about – Restarts have been the talk for at least a month. Kenseth jumped the restart at Richmond and was not called. Gordon jumped at Chicago and not penalized. On the final restart of the race, Keselowski jumped the restart and was black flagged. Keselowski went before the leader, Greg Biffle, as the field came to the restart box. Biffle held onto the lead and Keselowski slotted in second, so he did not gain an advantage. NASCAR obviously wanted to send a message to the field so they threw the flag even though Keselowski didn’t gain an advantage.

Martin Truex Jr. will be driving for Furniture Row Racing for at least another season, as the team has picked up their option on him for 2016. Next year Truex will be driving Toyotas, as FRR has announced a switch to Toyota and an alliance with JGR starting in 2016. The switch will make FRR the second organization in the series backed by Toyota. With the power that JGR has shown the second half of this season it should set FRR up for a strong run toward the title next year.

NBC Sports proved, once again, that it is all about the Chase and the rest of the teams don’t matter. Biffle finished in the top five for the first time in two months and the third time this season. He was also involved in the controversial restart that resulted in the black flag for Keselowski. Not only did NBCSN not interview Biffle during the broadcast after the race, they also didn’t speak with him during their post-race show. The teams who aren’t in the Chase deserve to be treated with respect during the broadcast, and a top-five run by itself deserved to get Biffle an interview, forget about the restart issue.

The 2016 schedule announcement is on the horizon, although the date has yet to be set. We know that Daytona will open the season on February 21st. Atlanta will follow on the 28th. Las Vegas is supposed to run on March 6th, with California on March 20th. The dates are based on press releases or websites for the individual tracks. Richmond International Raceway has also announced that their spring race will take place on Sunday afternoon instead of Saturday night. Look for the announcement in the next couple of weeks.

Late Sunday, word came out that Tony Stewart is going to race one more season in the Cup Series. A press conference is scheduled for Wednesday for the formal announcement. Stewart has struggled the last two seasons for several reasons and the rumor mill has been loaded with speculation that Bowyer would assume the wheel of the No. 14 in 2017. Stewart is the only driver with a Winston Cup, Nextel Cup and Sprint Cup. He currently has 48 career Cup wins. He has also claimed championships in the IRL, IROC and was the first driver to claim the USAC Triple Crown (Midget, Sprint and Silver Crown).

Who is mad – Busch came into the Chase looking to finally put it all together and claim a title in the top series of NASCAR. Trying to play it conservative in 2014 cost him at Talladega. This year he was pushing hard to try and run up front and contend for the win. Unfortunately that resulted in a flat right-front tire, contact with the wall, and over 30 laps spent in the garage. Busch returned to the track and, thanks to David Ragan and Danica Patrick dropping out of the race, picked up two spots, which put him right at the cut line for the top 12.

Keselowski restarted on the inside row on the final restart of the race. As he came to the restart zone he started before the leader Biffle. Ultimately Biffle held onto the lead and Keselowski slotted in second but NASCAR chose to call a restart penalty on the 2012 champion and black flagged him. Everyone knew that someone was going to get called for a restart penalty in the final nine races, and apparently NASCAR decided Loudon was the time to do it.

Harvick led 216 laps but his crew chief, Rodney Childers, missed a call to bring him to pit road with Kenseth, Hamlin and others. As a result, Harvick ended up attempting to save fuel while leading the race. Harvick attempted to save the gas necessary to make it to the end but came up a couple laps short. Harvick is now in a position where he basically has to win to advance to the next round.

Who is happy – Biffle has been the lone bright spot for Roush Fenway Racing this season, and that spot has been dim at best. Sunday was different thanks to Biffle getting to the front of the pack on strategy late in the race. Biffle ran the final 94 laps on a single tank of gas, six laps further than Harvick was attempting to run, and came home with a top-five finish for the third time this season. It is a shot in the arm for a team that has been struggling mightily all season.

Edwards started on the pole and was in the mix for the first 160 laps until he was penalized for dragging his gas can out of his pit box. Edwards managed to stay on the lead lap and pitted with his JGR teammates for the final time, coming home with a fifth-place finish. Edwards sets himself up for a stress free day at Dover, 33 points ahead of 13th and just needing a solid day to join his teammates Hamlin and Kenseth in the second round of the Chase playoffs.

Gordon started the day telling his crew that his car was junk and that they were in serious trouble. He finished the day driving under the checkered flag in seventh place. Gordon is the last driver who can feel rather comfortable heading into Dover as he sits 12 points ahead of 13th. A top-15 finish will lock Gordon into the second round of the playoffs, which many people thought might not happen the way the No. 24 team limped into the playoffs.

Kenseth scored his 36th victory of his career in his 572nd start. This is Kenseth’s second career triumph at New Hampshire Motor Speedway. Kenseth’s win is his fifth of 2015. Kenseth is 20th on the all-time win list, one behind Bobby Isaac.

Hamlin finished in the top two for the third time this season and the second time in two weeks. Hamlin has come home first or second six times in his career at Loudon. Hamlin’s second-place finish was his 19th of his career. That ties him for 41st on the all-time runner-up list with Tim Flock, Dick Hutcherson and Jack Smith.

Joey Logano came home in third for the eighth top three of his season. This is Logano’s third top three at Loudon in his career. Logano has finished on the podium 29 times in his career. That ties him with Bowyer, Tim Richmond and Morgan Shepherd for 63rd on the all-time list.

Fuel strategy can make for an interesting race and that is what happened at Loudon on Sunday. Unfortunately for Harvick, the best car did not win the race. There were four on-track passes for the lead and some actual passing for position in the pack away from the insanity that is restarts. In the end it was a fun race to watch, although far from a barn burner. We’ll give this one three cold Farmhouse Reds from White Birch Brewing.

Where do you point your DVR for next week – Race three of the Chase takes place in the first state, as the traveling circus heads to Dover International Speedway to take the green flag at 2:30 p.m. ET on Sunday, October 1st. The race can be seen on NBC Sports Network. The action can also be heard on your local MRN affiliate, SiriusXM NASCAR Channel 90. It can also be streamed on NBC Sports Extra.