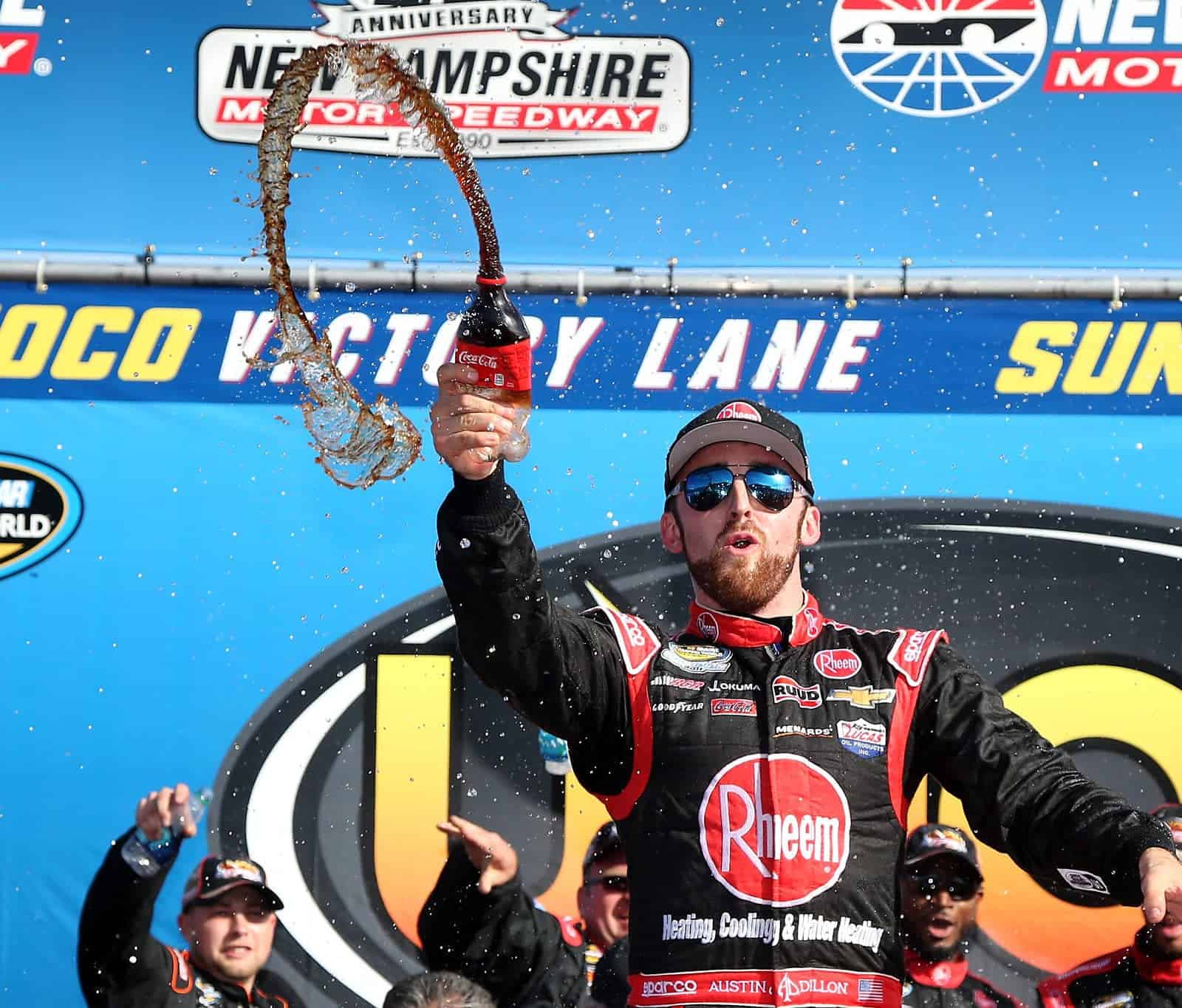 In a Nutshell: Austin Dillon took the checkered flag 1.054 seconds ahead of Matt Crafton to win Saturday afternoon’s UNOH 175 at New Hampshire Motor Speedway. Dillon survived a restart with Crafton charging hard to his outside with nine laps remaining and was able to gap the field en route to Victory Lane. Johnny Sauter, Timothy Peters and John Hunter Nemechek rounded out the top five.

Who Should Have Won: Simply put, Dillon was the truck to beat all weekend, and he backed that up during the race. Having led both practice sessions, the driver of the No. 33 Chevrolet took the pole Saturday morning and led the first 43 laps of the race. After losing the top spot on a later restart, Dillon spent much of the race running inside the top three before he was able to capitalize on not pitting when the rest of the field did. He ended up leading a race-high 80 circuits on the day.

Kyle Busch Slows to Give Erik Jones a Point

At about the midway point of the race, Kyle Busch Motorsports owner Busch held a comfortable lead of more than a second-and-a-half over his driver and teammate Jones when suddenly he slowed on the track. To watch such a dominant truck slow so dramatically, I sat here wondering what was wrong with the No. 51 Toyota, but as it turned out, he had slowed just to allow Jones to take the lead and earn a bonus point.

The booth talked about the incident, first wondering what was wrong and then in disbelief at the timing of the move. They even went as far as to say Busch could blame the slowing on an ignition problem or something. Are you kidding me?

I mean, I know helping teammates isn’t anything new in NASCAR, but I haven’t seen such a blatant move in quite a while, and it’s not something I agree with at all, especially not in the way it was done. Letting your teammate start on the outside of the front row and grab the lead by dropping down to the bottom of the groove is one thing, but to drop the speed so dramatically was just too obvious and should not be allowed by NASCAR.

What happened to the mandate that drivers should race at 100%?

Following one heck of a rebound at Chicagoland Speedway last weekend after an early black flag, Reddick just couldn’t get the truck right Saturday. Struggling with handling for much of the day, the driver of the No. 19 Ford qualified 14th and worked his way inside the top 10.

But on lap 37, Reddick got into fluid laid down on the track by Jordan Anderson and went spinning, though he was able to avoid hitting anything. After sitting through the 13 1/2 minute red-flag period, the No. 19 team got to work and sent Reddick on his way, deep in the top 20.

If that wasn’t enough, Reddick got loose on his own and spun to bring out the final caution with less than 15 laps remaining. This time, he wasn’t so lucky and bounced off of the inside wall, cracking the back bumper and causing substantial sheet metal damage.

To make matters even worse, Reddick turned his truck around right in front of a couple trucks that were still straggling by, nearly taking out Jennifer Jo Cobb along the way. The team worked feverishly to fix the damage enough to keep him on the lead lap, and Reddick went on to finish 15th as the last truck on the lead lap.

What an uphill battle today! It was a humbling experience. I gave it 110%and so did my team. We never give up and never will.

What Happened to Spencer Gallagher?

Just shy of the 100-lap mark, Gallagher slowed and hit pit road earlier than was expected for the final round of pit stops. The team jacked up the right side of the truck, looked a little and sent its driver behind the wall for repairs. And while the television broadcast team speculated about what might be wrong with the No. 23 truck, no one ever followed up

As it turned out, Gallagher reported that he had lost all of the drive in his truck and was forced to bring it in for a look. The team had to replace a rear gear, but the damage was already done and Gallagher was left to circle the track more than 40 laps down en route to a 28th-place finish.

#NCWTS The @Allegiant team feverishly work to repair @23SpeedRacer's @chevrolet and return to the track to save pts pic.twitter.com/1BB06lJ8pq

“Our Allegiant Travel team really showed what they’re made of this weekend. We constantly improved the balance throughout practice, and definitely made gains during the race,” Gallagher said. “It was unfortunate to have the rear gear issue, because with all the attrition, and the way we were improving our Silverado, we would have had a great opportunity to get another top-10 finish.

“But, today is about our entire GMS Racing organization. Austin [Dillon] getting our first victory is huge, and really shows what type of team we’ve been able to build this year. I can’t wait to get to Las Vegas and run well out there next weekend.”

The Camping World Truck Series celebrated its 500th race, and Dillon’s victory was the first for GMS Racing. It was also crew chief Shane Huffman’s first win atop the pit box.

Sauter recovered from a terrible qualifying effort on Saturday. During the second round, the driver of the No. 98 Toyota spun heading out onto the track and never posted a speed. He ended up starting 23rd and spent the entire race working his way up to the top five before finishing third, matching his best results this season from Kansas and Gateway.

Rookie of the Race: Nemechek

Points Update: Saturday’s race opened up the championship battle ever so slightly. Jones maintains the point lead by just seven markers over Crafton. Reddick managed to only lose eight points to the leader and now sits 19 behind Jones. Sauter and Hemric round out the top five.

Peters sits sixth in the standings, followed by Hayley, who is just three markers back in seventh. John Wes Townley sits eighth, 148 points behind the leader. Gallagher and Ben Kennedy, who both suffered setbacks during the race, are tied for ninth.

“It’s very special. I owe a lot to the Truck Series for getting me to where I am today. I’ve had a lot of success qualifying, racing and winning in the Truck Series. It taught me a lot about how to race hard when you have to. It’s definitely a fun series to be in, and I’m thankful for it. Hopefully, we can have thousands of races in the Truck Series. I’ve enjoyed all of mine.” – Austin Dillon

“This is a big day for Mr. Gallagher here. He’s put a lot of effort and financial support into this team — a lot of hard work and effort over the last couple years. It’s just great to be able to reward him with a win. I told Austin [Friday] before practice started that I wanted to win everything this weekend. I meant it. I felt like this could be our weekend, I really did. I was excited Monday to come here. You always have it in the back of your mind, ‘What can go wrong?’ at the end. Obviously, we stayed out with 20 laps on our tires with 40 to go, so it’s never easy, but I felt like it could certainly happen today.” – Winning crew chief Shane Huffman

“It was a very eventful day without a doubt. We missed it in qualifying for sure. We didn’t qualify nearly as well as we wanted to, and just kept tuning on it all day. My restarts were beyond pathetic right there at the end. Johnny [Sauter] kept helping me get my feet off the ground on the last restart, but it still left something to be desired, for sure. All in all, it was pretty good day. I would say we had about the third-best truck here, and came out of here second. I’ll leave with that, and run.” – Matt Crafton

“First of all I screwed up in qualifying by spinning out leaving pit road, I feel like an idiot for doing that. I’m proud of everybody at ThorSport Racing on our Nextant Aerospace/Curb Records Toyota – that was a solid effort. I knew we had a good truck yesterday after practice, and track position is so important anymore. You can be a couple tenths faster than the guy and catch him, and you just can’t do anything with it. We passed a lot of trucks today, and tried to push my teammate for the win there at the end. We both just couldn’t get going. Nonetheless, I’m proud of everybody at ThorSport Racing, this is a good run, especially for the hole I put us in after qualifying.” – Johnny Sauter, finished third

“We’ve just been working really hard and we really wanted to do well here. I think sixth is the best that we’ve done (prior to today’s fourth-place finish). We just fought free (handling) and then we fought tight one run. Then that last run we took two tires and we were just a little too free. All in all, great effort by everyone on this Red Horse Racing Tundra. Great run last week, great run this week and going into one of my favorite places next week with a lot of momentum.” – Timothy Peters, finished fourth

Up Next: The Camping World Truck Series heads across the country to Las Vegas Motor Speedway next Saturday night. Last year, Jones beat out teammate Darrell Wallace Jr. by nearly a second-and-a-half. Coverage for the Rhino Linings 350 begins at 10 p.m. ET on FOX Sports 1. The race can also be heard on your local MRN affiliate and SiriusXM NASCAR Channel 90.