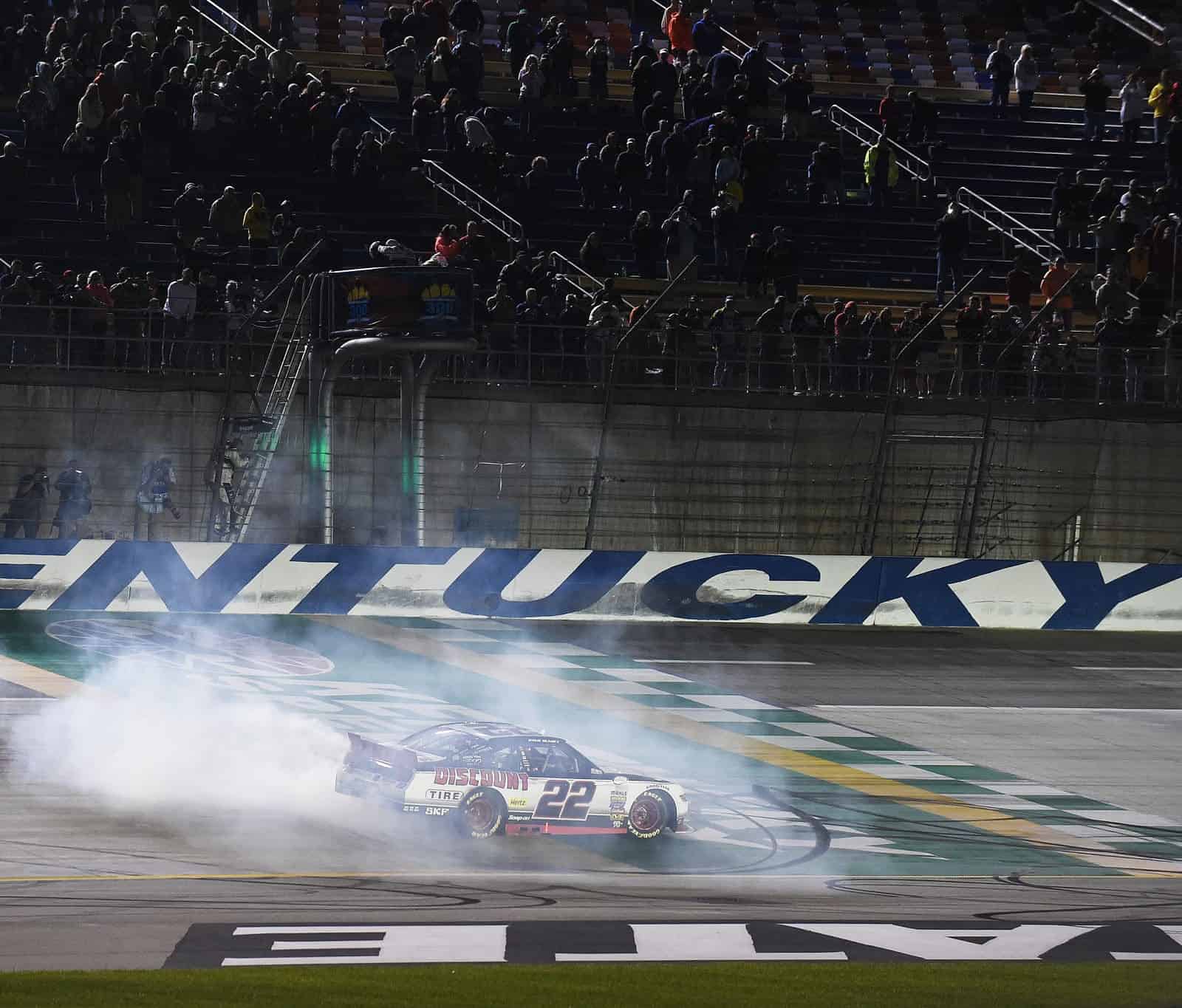 After a long, strange weekend at Kentucky Speedway full of rain, wrecks and hurt feelings, Ryan Blaney was able to pull through for his second Xfinity Series victory of 2015 and fourth career win. In a race that saw a record-tying number of cautions and several late-race restarts, it was the final restart that allowed Blaney to pull through with a well-timed push from Regan Smith. On the prior restart just a few laps earlier, Ty Dillon had gotten away from Blaney and it looked as though he would run away with it. Amazing how much can change in such a short amount of time.

Blaney ultimately led the most laps (81) in the final standalone event for the NXS for the remainder of the season. Brian Scott led the next most number of laps at 45, but had to pit under green for a vibration and ultimately finished 13th. He could have easily been forgotten, but a situation on pit road between Darrell Wallace Jr. and him kept that from happening. More on that later.

Chris Buescher saw his points lead diminish slightly following a seventh-place finish. He now holds a 19-point lead over Dillon. Elliott is third, -25 from Buescher. Smith (-47) and Wallace (-108) round out the top five.

Blaney would not have wound up in this category if not for the final restart. On the second-to-last restart, Dillon and Blaney were side-by-side for the lead. Blaney didn’t get a good restart and Smith shoved his way to the lead, pushing Blaney back to third. Blaney was able to move his way back up to second, but by then Dillon had built up a cushion between himself and second-place and it didn’t appear Blaney would be able to run him down.

Then, Jeremy Clements crashed on the backstretch, bringing out what would be the night’s final caution. As the field came back to green, Blaney was crowding Dillon on the front row so as not to let Dillon get away. Then, Blaney received a shove from the No. 7 of Smith. This pushed the No. 22 out to a sizable lead and that was all she wrote.

The victory was a rebound from the No. 22 team after crashing in Chicagoland the weekend before, finishing 35th.

Also, a shoutout needs to be made to Jones and Matt Tifft. Jones, who announced over the weekend he will be racing for Richard Childress Racing full-time next season in the NXS, had a noticeably fast racecar and made the most of it. Jones was able to lead 16 laps and finish in the top five, a defining moment for Jones’s career thus far.

Additionally, Tifft was competing in the No. 20 car for Joe Gibbs Racing. While he wasn’t able to lead any laps, he was as high as second towards the end of the race and absolutely had a car capable of winning. Watching Tifft in the car, you never would have known this was his first career NXS race. Most fans probably don’t know him at all, and if they do, it is for his time in the ARCA Racing Series and Camping World Truck Series. Perhaps he is deserving of an NXS ride now too.

Ben Rhodes wrecked twice over the course of the night. He was involved in the very first caution of the night on lap 3 (a four-car incident) and wrecked again on his own on lap 168. This was Rhodes’s eighth career NXS start. Rhodes showed a little bit of speed over the weekend and qualified 15th. While he was never really a factor or considered a threat to win, wrecking twice in one night certainly wasn’t expected either. He finished 30th.

Additionally, JD Motorsports had an expensive – er, rough – night in Kentucky as well. All three of their cars (No. 01, No. 4, & No 0) crashed at some time or another during the race. Michael Self wrecked on his own on lap 28. Harrison Rhodes was involved in an accident with Brennan Poole on lap 100 (a wreck that caused a nearly 20-minute red flag). Finally, Ross Chastain was involved in a multi-car accident with 11 laps to go, a wreck that also involved Scott, Cale Conley and Ryan Truex. Chastain finished 18th, Self finished 36th, and Rhodes finished 34th.

Scott was obviously frustrated with the night, considering that he (once again) had a car capable of winning and (once again) came up short as a result of something that was not of his own doing.

Or, maybe it was, depending on how you look at it. Scott was upset with Wallace about some contact on a restart earlier in the race. Wallace appeared to come down the track, hitting the right side of Scott’s car. The contact caused some damage to Scott’s car, damage that he claimed ruined their night.

After the race on pit road, Scott walked over to Wallace while Wallace was still in his car. The two talked for a few seconds and the conversation turned physical. Though it didn’t appear any punches were thrown, there was clearly a scuffle that had to be broken up by a NASCAR official. Again, while Wallace was still seated in his racecar.

After a few minutes to gather himself and once Wallace had gotten out of his car, Scott again walked over to Wallace where the two began yelling at one another about the incident on the track. The two were eventually separated again but not without a very heated exchange.

The nod on this one needs to go to Jones. As mentioned before, Jones earned his first top-five finish of the season and led 16 laps in a performance not normally seen or expected from this driver. Part of that could be attributed to the fact that there were no Cup Series regulars in the race as this was a standalone event, allowing drivers like Jones to shine. Nevertheless, Jones really put on a show and earned his spot at RCR in 2016.

Erik Jones pulled double duty, racing in the Camping World Truck Series race at New Hampshire before flying to Kentucky Speedway. He finished eighth in the NXS race and was not eligible for points as the Truck Series is the series he declared for points at the beginning of the season.

TJ Bell was another driver ineligible for points, though his points eligibility is in the Sprint Cup Series.

It’s always fun to be able to see the NXS regulars shine on their own without double-duty Cup Series drivers stinking up the show. Of course it’s considered a necessary evil in some respects, and it makes the standalone events that much more enjoyable. We noticed names we wouldn’t otherwise have noticed and maybe wouldn’t have even been in the race at all had the series been sharing a weekend with the Sprint Cup Series.

The racing itself was OK, albeit long. A red flag, multiple cautions, and even a bit of a rain delay all played a role in the event. The restarts, as per usual, were the most exciting parts of the race and contributed to most of those 10 cautions (and the “discussion” on pit road after the race). At one point, there was a brief moment of five-wide racing, a rarity in any series. The word “breathtaking” comes to mind!

It would be nice to see more standalone events for the NXS, but I understand why there aren’t more. The series probably wouldn’t be what it is without it sharing a spotlight with the Sprint Cup Series most of the time. But it’s really enjoyable when these events come around, and we’ll remember many of the names from Saturday night a lot more clearly in the future.

Next weekend, the series heads to Dover International Speedway for the Hisense 200 where Kyle Busch is the defending race winner. The race is Saturday, October 3rd at 3:30 p.m. ET on NBCSN.

Good job Mr. Blaney…I am sure Regan Smith loved to help you out when he did…:)

I know he was driving for a Cup affiliated team, still, good job by Ryan! And he drove a Ford to boot! And it certainly does look like the 60 team is beginning to implode. I’ve said it before, and I’ll say it again, there is no way on earth that a Ford driver is going to be allowed to win the Championship, as hollow as an Xfinity championship will be, what with all the Cup drivers winning every time they show up. Still, given the way NASCAR works, I maintain that Chase Elliott, with his Hendrick backing, will repeat as Champion.

Speaking of Satan Incorporated, aka Hendrick Motorsports, I wonder if the powers at Chevrolet will say anything to Mr. Smith for giving Blaney a push, instead of helping another Chevrolet driver (Dillon). Oh, I forgot, Smith vowed to make sure Dillon won’t win the Championship.

Last, I don’t get why everyone is so enamored with Joe Gibbs, considering especially how he treats some of his drivers in the Xfinity series. Remember Milwaukee in 2007, when Aric Almirola practiced the car Dennis-the-menace Hamlin was to race? The car was sponsored by Rockwell, who’s headquarters was in Milwaukee, and they wanted Hamlin in the car. Why? Anyway, Almirola got the pole, but, because Hamlin’s plane was late getting there from Sonoma, Almirola started the race and lead all the laps until Dennis-the-menace got there, which was almost at the half-way point. Hamlin shows up, and Almirola was unceremoniously hauled out of the car and replaced by Hamlin. Nice! Fast forward to Kentucky, September, 2015. Drew Herring practices the car, leads all practices, and qualifies well. Does he get to race? No! That prima donna Kyle-Busch wannabe, Princess Eric, was flown in and got to race the car. Sheez! Hey Coach, why couldn’t you let Herring race it last night? Was it a demand from Monster Energy? Or was it Kyle’s demand?

The press likes to say how GIbbs is a big promoter of young talent in the Xfinity series, to a very limited degree they are. On the flip side of things they tend to go thru those “young” drivers very quickly and toss them aside without the “development” that people seem to think they provide. They really don’t. I believe JD was/is more of the reason then coach, but then again it is their teams and Coach is just as responsible. I am sure JD’s input is still just as valuable to Coach. They left a lot of drivers outside looking in, in pursuit of the Xifnity series glory. Imo of course.

Gotta disagree with your version of the contact between Scott and Bubba. I watched it a couple of times when they replayed it. I agree that Bubba did move down a little after the restart, however Scott moved up into Wallace and caused the contact.
Also, wasn’t Scott the driver who “ran out of talent”in turn 1-2 and slid up and caused a two car wreck?

It looked like they had a fairly nice crowd for this stand alone race. It appeared to be at least as good, if not batter, than the races the Cup drivers commandeer. It certainly seemed to keep the broadcast covering much more of the field instead of just showing the Cup interlopers. I found it much more entertaining to watch this race, and the coverage, without the distraction of the Cup drivers.

I have a social media friend that likes standalone Xfinity races better. She said she considered watching the Richmond race, but decided it was likely a Cup interloper would likely win (which didn’t happen, but the winner of that race has run in some Cup races), so that would be a waste of time, but said this race was better because it was without Cup drivers. There’s probably a lot of people like my friend. I remember some poster on this site, John, I’m thinking, said he doesn’t watch this series because of Cup drivers.